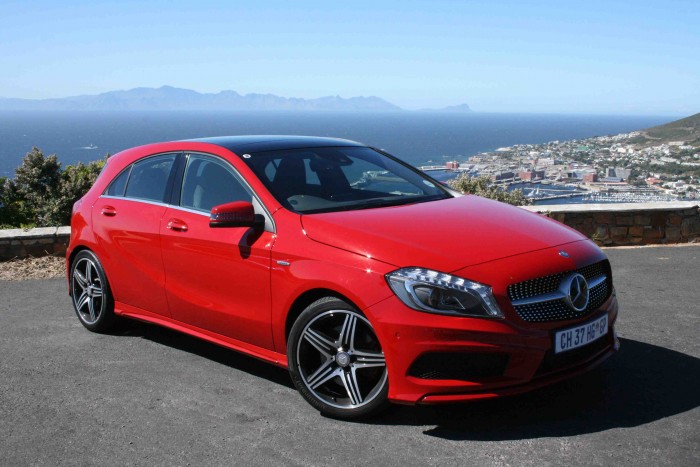 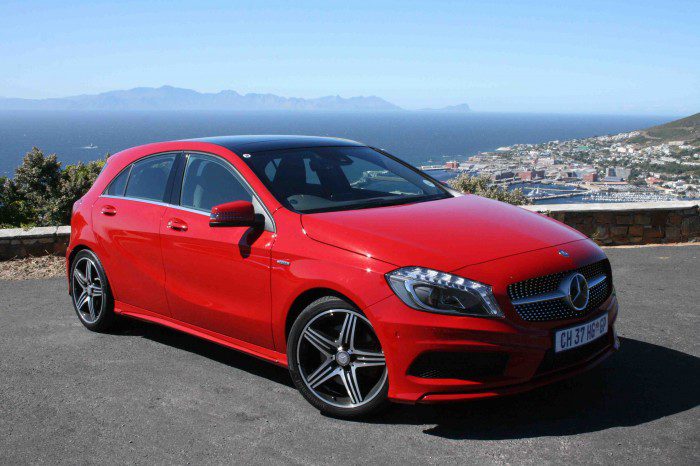 The design for the last baby Benz was probably inspired by a pram.

Mark Fetherston, who was also responsible for penning the SLS supercar, cited sharks and sand dunes as muses for the new A-Class.

According to the marketing men, the “A” stands for “attack” – having been reinvented spectacularly, the entry-level Mercedes looks poised to give its rivals from Audi a powerful kick in the groin.

We sampled it at its launch in the Western Cape and came away impressed overall; but the 2013 Mercedes-Benz A-Class is not absent of criticism.

Sharp creases, compact proportions and striking embellishments help the little Benz stand out in its segment.

While everyone might have a favourite here, we think the A-Class looks the best compared to the awkward BMW 1-Series and the Plain Jane Audi A3 which induces a yawn.

At the front it borrows elements from the flagship SLS – the wide grille and single chrome of strip bearing the three-point star emblem – and angry-looking headlights.

Down the side it sports a pleat in its metal like the bigger B-Class, but things take a generic turn in the rear. From a distance, it has a bum like the Hyundai i20.

Following BMW’s trend, there are three lines you can opt for. First is the conservative Style grade, next up is Urban and then there’s the AMG Sport specification. Buyers can play mix and match with the interior colours too.

Too Stiff For Hugh Hefner

In a bid to achieve a sporty character the young fast crowd would approve of, Mercedes-Benz gave the A-Class a taut chassis capable of rattling the bones on undulating surfaces.

Ripples on certain sections of the Cape’s twisty roads accentuated the car’s hard-riding nature. Models with smaller alloy-wheels are more forgiving if you have a bad back.

That said, it tucks into the corners with eagerness and sticks with resolve all the way. The steering wheel is light at city speeds and weighs up weighs up as the needle progresses through the speedometer.

For spirited driving, the underpinnings to a good job. But it is not as accomplished in delivering that perfect balance between comfort and firmness, as you would get from something like the Audi A3, with its all-new platform.

There is a wide range of engines for most palates and budgets. We spent most of our driving time with the petrol derivatives; the A180 and A200, which are both strapped with turbochargers.

The A180 would be ideal for most city-dwellers, it is fizzy enough when you’re gentle, but shows a bit of laziness to shift the car’s weight when you get heavy with your right foot. Its A200 sibling does a better job of delivering seamless, linear power.

For now, those after serious power will have to be satisfied with the A250 AMG Sport until the A45 model arrives later this year. Diesels comprise of the A180 CDI and A220CDI.

Solid As A Rock

Now even though the A-Class panders to a younger, funky bunch, interior build quality is still on the level that attracted older buyers to the marque for decades.

There are beautiful details to soak in, from the aircraft wing-inspired dashboard, to those circular air-ventilation slots modeled to look like turbines on a plane. We liked the galvanized metal trim pieces and thick door panels.

Narrow window apertures add to the snug interior ambience. But one man’s snug is another man’s claustrophobia. The colour screen mounted on the fascia seems to divide opinion. Some like its iPad-like appearance, others say it ruins the flow of the dashboard. We’re in the latter crowd.

Overall, the lounge of the A-Class is crafted with the sophistication and solidity one expects from a Mercedes-Benz.

Last Word On The First Letter

This reinvention is just what Mercedes-Benz needed to gain a stronghold in the fierce premium compact segment.

Joining the C-Class as the automaker’s bread-and-butter offering, there is no doubt buyers will be inveigled by the car’s striking exterior, solid build quality and of course, the badge.

But as with all German automakers, one has to pay to play. If you want an example kitted to look as hot as the model in all the advertisements, you could end up spending nearly half a million bucks. 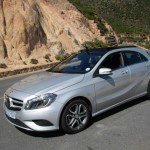 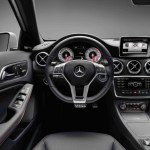 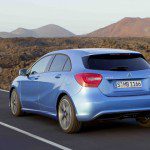