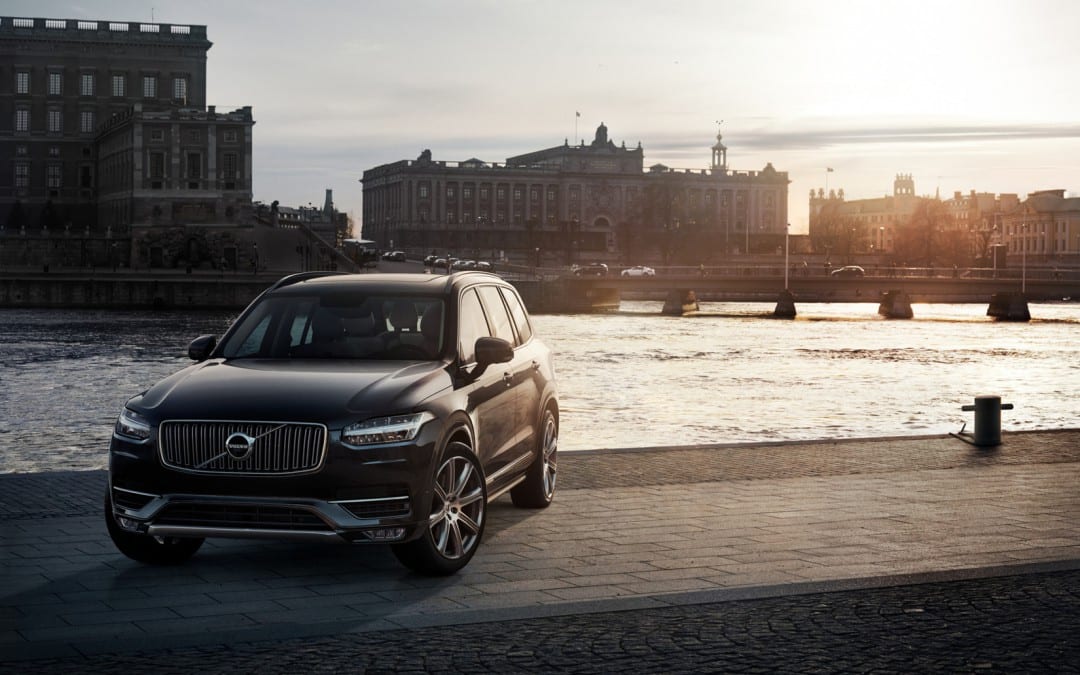 On the surface, Volvo‘s new XC90 is just another big on-road SUV, albeit an extremely smartly styled one. But, apart from its physical dimensions, cavernous cabin and throne-like driving position, the first “new Volvo” has very little in common with its competitors: rather, it represents the next step in the evolution of its class as much as it gives us a glimpse of the Swedish brand’s future. And going on the fresh thinking evident everywhere in the large seven-seater, that future is looking bright indeed.

For starters, the XC90 is the first car to use Volvo’s new Scaleable Platform Architecture (SPA) – the component set which will underpin all future Volvos from the S60 and upwards in size. This is very necessary development, for it will enable Volvo to replace their entire model range within the next 4 years. In fact, by 2019, the shiny new XC90 will be their oldest car on sale. Ambitious plans indeed, but it seems like they’re going about achieving these aims the right way. 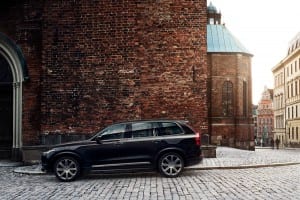 First out of the starting blocks were the all-new, in-house designed Drive-E engines, which saw their local début midway through 2014 in the facelifted S/V/XC60 models. Available in both petrol- and diesel flavours, the new family of engines share their cylinder blocks and crankshafts, but use unique cylinder heads for the different fuel types, and varying levels of boost to allow for different power outputs. Common to all Drive-E engines are a focus on reduced frictional losses, increased combustion efficiency (partly through sophisticated fuel injection hardware), and immediate compatibility with electrification to ease the introduction of hybrid drive systems.

But there’s a surprise: all the engines measure 2.0 litres in displacement, and they all make do with only four cylinders. Is it possible to tackle the German triumvirate’s advanced forced-induction 6- and 8-cylinder engines with a mere four-pot? Volvo seems to think so, and the bare figures seem to support this ambition: the top-line XC90 T8 boasts a total output of 300 kW and 640 Nm (within spitting distance of BMW’s 4.4-litre twin turbo V8). This output comes courtesy of an unusual “twin-engine” design, which mates a small electric motor with the highest-output petrol engine to drive the front wheels, augmented by another electric motor to power the rear wheels. This powertrain was not available to at the local launch event however, so we had to make do with trying out the mid-level D5 and T6 variants in the scenic winelands around Franschhoek. 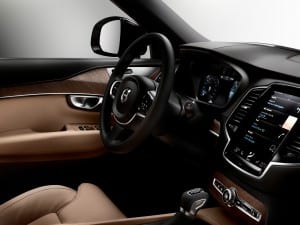 The D5 is the higher-output of the two diesel-powered variants which will eventually comprise the local XC90 range, and produces 165 kW and 470 Nm, courtesy of two turbo chargers. The other diesel will be called the D4, and loses one of those turbos to produce 140 kW and 400 Nm. The D4 will be the only front wheel driven XC90, but uses the same slick-shifting and well-programmed 8-speed automatic gearbox as all the other derivatives.

The T6 represents the middle ground of the petrol-fuelled XC90s, and uses both a turbo- and a supercharger to produce 235 kW and 400 Nm, while the last petrol version (also due to join the range in due course) is called the T5, which loses the supercharger but keeps the turbo to deliver 187 kW and 350 Nm. The Drive-E engines mostly deliver on their on-paper promise, with smooth power delivery across the board and reasonably sharp throttle response. While four cylinder engines seldom have the last word in smooth running or low noise levels, the XC90’s sound insulation is comprehensive enough to keep the cabin ambience extremely civilised. You might miss the hum of a BMW turbo-six, for instance, but you won’t notice anything amiss about the four-cylinder’s refinement or power output. 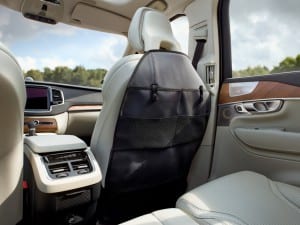 Civility is indeed the key word to every interaction with the new XC90. Apart from the relaxed, gentlemanly way it hustles you down the road, the ride comfort is absolutely top-notch, and its sumptuous seats support your spine in all right places. Even the interface between the car and its driver is tailored for effortless operation thanks to clever, newly-developed technology, dubbed Sensus by the Volvo marketing department.

Unlike the in-car control systems employed by its competitors, Sensus relies almost entirely on a large, iPad-like colour touch screen mounted in the middle of the dashboard, along with secondary controls on the steering wheel. Pressing the large button below the screen displays a home page with four tiles: Media, Navigation and Phone, along with whichever other “App” was last accessed. Tapping on any one of those tile zooms in on your selection and minimises the other options, while large, easy-to-decipher icons make navigating the system a breeze, even on the move.

Adding icing to this clever cake is the way the touch screen detects movement: an infra-red sensor array instead of the more common capacitive touch system means that the screen will work even with gloved fingers. This is sure be useful in a Swedish winter, but also means that the screen is very quick to respond to inputs. Swipe left or right (just like with a smartphone) to access simple on-off switch icons for the driver assistance systems or for apps such as streaming audio and weather prediction services. Even the air-con controls (also accessed from the touch screen) are ridiculously user-friendly: they’re always accessible from the bottom of the screen, and offer a multitude of ways to change settings. 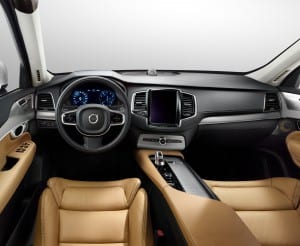 It really couldn’t be easier – while it takes a while to acclimatise to Volvo’s new way of operating a car, it soon becomes second nature, and makes the current crop of rotary controllers and haptic feedback devices feel decidedly last-century. In modern Volvo fashion, the digital instrument cluster can be configured to suit any preference, while the head-up display projects pertinent driving data, speed limits as well as navigation instructions into the windscreen. The only chink in Sensus’s armour is that the head-up display is still not legible to drivers with polarised sunglasses, though this is hardly a Volvo-specific issue…

The new XC90 is no less advanced under its handsome skin either, and features a whole host of safety add-ons. It’s clear that Volvo has had a head start of most other manufacturers in the field of driver-assistance systems, because it’s all so subtly integrated that most drivers would hardly realise how much the car is helping to ensure their safety. Simple things like the lane-keeping system give the gentlest tugs on the wheel, and the collision warning system doesn’t flood the dashboard with warning lights, in contrast to its competitors. 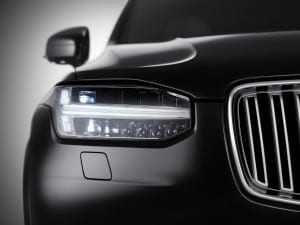 City Safety autonomous braking is standard equipment, but it’s been extended to automatically apply the brakes if the driver tries to turn into the way of oncoming traffic at intersections. Apart from a 5-star Euro-NCAP crash test rating and the usual six airbags, the list of safety measures are too lengthy to detail here, but rest assured in the knowledge that the new XC90 will do everything in its power to keep its occupants alive.

As for the comfort of those occupants, the new XC90 has that covered as well. I’ve already mentioned those superlative seats, but there’s more to it than just great chairs. The attention to detail starts under the floor, where the standard rear suspension utilises a transverse leaf spring made of composite materials, just like you’d find in a Chevy Corvette. But while the Corvette uses this setup to aid handling and road holding, Volvo uses it to free up extra space for the passenger compartment. The upgrade on this innovative rear spring system is full-on air air suspension, which also allows different ride heights to be selected, depending on the terrain you’d like to traverse.

Either way, the cabin has plenty of space for five large adults in the first two rows, happily accommodates persons up to 1.7 metres tall in the rearmost row, and offers a reasonable amount of luggage space behind the third row of seats. Middle row passengers receive their own air-con controls, and they can even hook up their tablets to the new XC90’s in-car wi-fi hotspot. The middle seats even slide fore and aft individually, and offer adjustable backrests, to allocate space wherever it can be most useful. 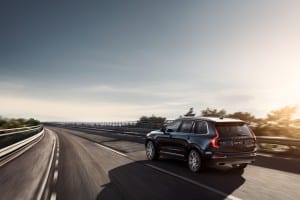 And even after all these words, there’s so much more that could still be said about the new Volvo XC90, because there’s so much about it that is unique, innovative and unusual. Your best bet would be to head down to a dealer as soon as the new cars land (expect them to be on hand from 1 August) to explore the new world of Volvo for yourself. Just take some to time to do this, because there are so many pleasant surprises that they can’t all be absorbed in the usual half-an-hour test drive. And afterwards, remember to take a get-well card to the German dealership: this Volvo just handed them a knockout punch…