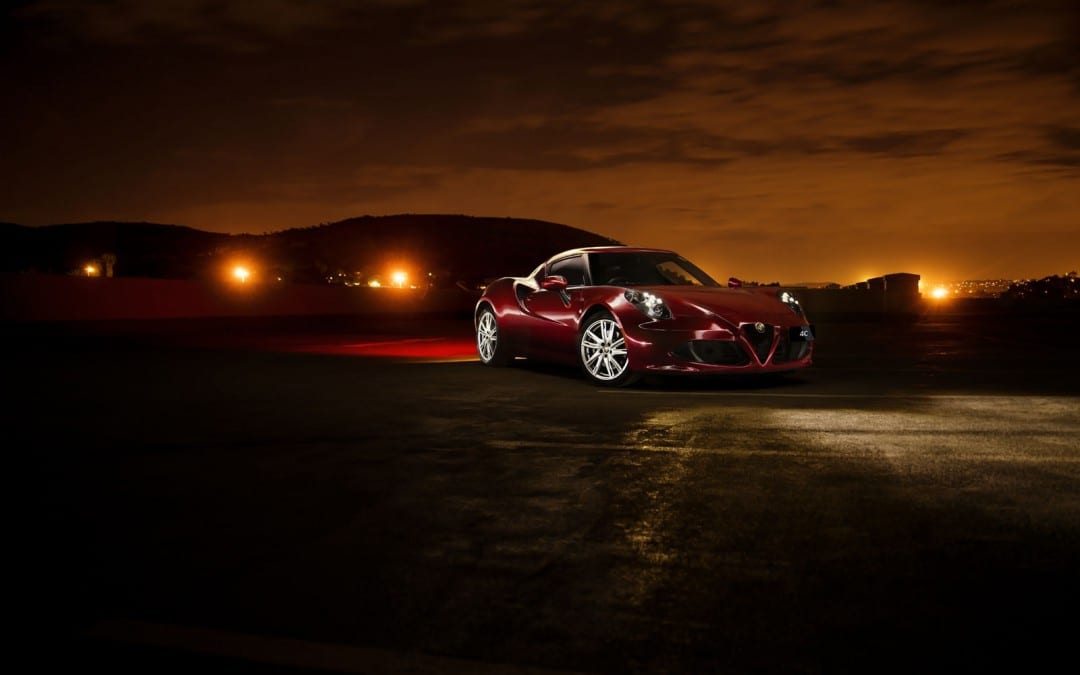 There’s a hiss behind my left shoulder and the chirrup of a blow-off valve behind my right. This cacophony is overlaid with the blare of a highly-tuned 4-cylinder engine and some pops and bangs from a very short, very loud exhaust – all of this indicating that the little monster I’m piloting is primed and ready to attack the upcoming corner. And this is exactly the point where the universe decided to pull a prank on me by spilling something oily on the normally grippy surface. This is not an ideal situation in any car, let alone a little mid-engined Italian exotic. I’m barreling into a corner rather quickly, and as the car loses its grip on the road, the next day’s clickbait-worthy news headline flashes in my imagination: “Motoring Journalist Wrecks Italian Sports Car”.

And indeed, the little Alfa steps smartly sideways, but I manage to arrest the slide and straighten out the car’s trajectory thanks to my lightning-quick reflexes and superb car-control skill. Actually, that’s not at all what happened. Rather, the car’s inherent balance and quick-reacting steering made it absurdly easy to control, turning a near-disastrous slide into a graceful drift worthy of a Japanese cult movie – and making me look like an amazing driver in the process (a blatant untruth, but I’ll take what I can get)… That’s the thing about the Alfa Romeo 4C: it flatters you as much as it insults you, and delivers sensory delight and physical abuse in equal measure. If you desire passion, both love and conflict, in your relationship with a car, this is exactly what you need to go buy.

You also need to buy a 4C if you can appreciate genuine automotive sculpture, because it’s achingly beautiful. Not even this test unit’s spidery-eyed headlights detracts from its beauty, and its lustrous coat of red pearl-effect paint caresses the curves and lines in a way which never fails to mesmerise. The front end has some traces of Lotus Exige about it, the rear brings the original Ford GT40 and many modern Ferraris to mind, and all this is connected by a tapered cabin which somehow manages to evoke both the Lancia Stratos and the 1960’s Alfa Type 33 Stradale. It might sound like a somewhat odd combination, but the sum of all these parts creates a true traffic stopper and draws admiring glances from absolutely all onlookers. 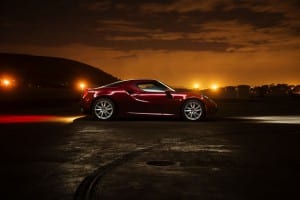 Fortunately, these nods to the past doesn’t mean that the 4C is in any way old-fashioned. A large part of the car is pure science, with high-tech construction methods including a carbon fibre tub to serve as passenger cell (like a Formula 1 racer or a Ferrari LaFerrari), aluminium subframes to carry the engine and suspension, and a sophisticated control system for the handling dynamics. The drivetrain is also perfectly in tune with modern trends, being a downsized 1.75 litre turbocharged unit derived from the Giulietta QV’s powerplant which sends its power to the rear wheels through a 6-speed dual-clutch transmission. It all seems suitably racy in theory, and translates into equally rowdy performance in practice.

That raciness does have some serious downsides, however: the ride quality is borderline crashy, even on this test unit’s standard-sized rims (17-inch in front, 18-inch at the back), so it will probably be unbearable on the optional 18/19-inch combination. There isn’t an abundance of ground clearance either, and suspension travel is limited, so even small speed humps and potholes need to be approached with extreme caution. The lack of sound insulation (you literally see the bare carbon tub all over) means that it’s also extremely noisy, which isn’t an issue when you really want to interact with the machine, but becomes tiresome on even short freeway stints. And then there’s the visibility issue: it’s like sitting inside a full-face helmet, with only a shallow 180-degree slot affording you a view of the world outside. Blame the mid-engined layout and sturdy rear roof pillar for that.

Creature comforts don’t rank too highly with the 4C either. The air-con system struggles to cope with a highveld summer’s day, and the radio’s operation is practically indecipherable – not that you hear much of it over the noise in any case. There isn’t even a glove box, only a small elastic pouch under the dashboard to hold your wallet and smart phone. And don’t dream about putting your groceries in the small compartment behind the engine, unless you want it cooked or melted by the time you get home. Ice cream is clearly a definite no-no – it gets really hot back there. Neither this tiny boot nor the two-seater cabin is particularly nicely trimmed, and rather relaxed assembly quality of somewhat cheap-feeling plastics and loose carpeting is the order of the day. 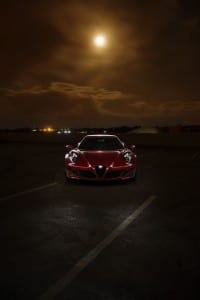 Some people would most definitely balk at the perceived quality – the kind of people who also expect some luxury and gadgets at this price point. Let’s face it, a million Rand-plus pricetag can get you some pretty classy German machinery, most of which match or better the 4C’s bare performance figures while offering spacious, sumptuously trimmed cabins loaded with modern technology. But there’s one area where the 4C triumphs over all its classier opponents, the only thing driving purists will care about, and that’s where the rubber meets the road.

The secret lies in its lightweight construction and weight distribution. Because what little weight there is, is concentrated right behind the driver, the 4C changes direction with alacrity. Less weight on the front tyres also means that power steering could be done away with entirely, leaving a steering rack with breathtaking feedback and incredibly sharp responses.

And while the suspension is certainly past the firm side of comfortable, it does help to keep the car level through corners and maintain strong contact with the road. Alfa’s Q2 diff control gets four operation modes, selected by the “DNA” switch mounted in the skimpy centre console. It acts like an electronically controlled differential with various locking ratios, even though it’s still essentially just brake-controlled traction management system. The DNA modes also change the throttle- and gearbox programming to suit slippery or “normal” conditions, in addition to “Dynamic” or “Race” modes, which are really the only two modes you should ever use when driving a 4C. 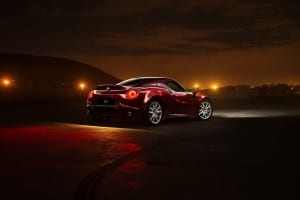 All this cleverness means that the Alfa 4C can claw its way around corners much faster than you’d imagine possible, and goads you into pushing harder and harder. The brave will eventually reach the grip limits to find a gradual push into mild understeer – something which is easily solved by applying a bootful of accelerator pedal to initiate a smooth power slide, or doing a quick throttle lift to tighten the line a little quicker. Either way, the 4C remains benign and controllable in the way of a Fiesta ST, and actually encourages a skilled driver to play on the far side of the limits as often as possible.

Of course, it’s highly anti-social to drive like that on a public road, which makes the Alfa 4C far more suitable for track use than as a daily driver. The drivetrain follows this
track-biased philosophy, and often feels unable to cope with normal traffic conditions. When left to its own devices, the gearbox apparently goes through its ratios governed by random logic, and often gets caught flat-footed during sudden power demands while clunking its way through a traffic jam.

Switch over to manual mode however, and the picture changes a great deal. While gearshifts aren’t performed with the kind of quick, buttery smoothness you’d get in a Porsche PDK (or about 70% of all other dual-clutch transmissions, for that matter), it bangs home the gears with an emphatic thump and is generally faithful to your instructions. In manual mode, it doesn’t change up automatically when the rev-limiter approaches either, which is quite a useful attribute when you’re riding out a diesel spill-induced powerslide… 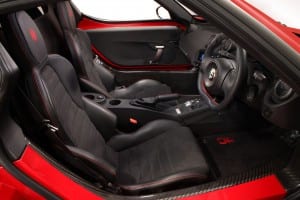 The engine also compensates for the gearbox’s quirks, because its broad spread of power negates the need for frequent gearchanges. It’s a sweet-spinning unit which doesn’t mind chasing the 6 750 r/min redline, and it keeps building power as the engine speed increases after the usual turbo torque swell in the midrange. Fuel consumption is pretty reasonable too, averaging only 8.8 ℓ/100 km during the test period, in spite of frequent meetings between the accelerator pedal and footwell.

There is 177 kW and 320 Nm on tap, which doesn’t sound like much, but in a car which weighs only 960 kg and has excellent traction, that’s enough for fairly storming performance. The 0-100 km/h sprint is officially dispatched in 4.5 seconds, although my iPhone app repeatedly registered 4.2 seconds to get to 100, and 12.5 second quarter miles at 177 km/h during full-bore, launch-controlled sprints. The brakes are equally impressive: the disks are not particularly large, but the car’s lightweight construction again helps to ensure powerful, fade-free retardation.

But these bland figures still don’t capture the essence of the 4C driving experience. Yes, it’s very quick and it’s very good at going around corners – but so are a number of other cars around the same price point. What makes the 4C different is the way it feels to drive. The steering wheel continually writhes in your hands, relaying every nuance of the road surface directly to your brain. The slightest twitch of your fingertips sends the nose darting in a different direction, and once the car is committed to the corner, it still responds faithfully to every command from its driver. The 4C delivers an interaction between driver, car and road surface which simply cannot be matched by any other modern cars, with their electric power steering racks and adaptive suspension systems. 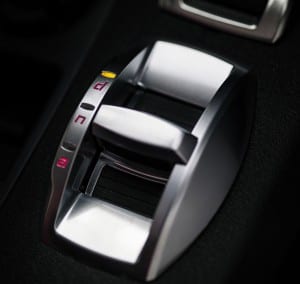 So what we have in the Alfa Romeo 4C then, is one of very few cars which actually deserve to be called a racing car for the road. It might be terrible at being a car – carting the kids and shopping around, keeping you relaxed in traffic, that sort of thing – but as a driving tool, it’s just about without peer. It is single-mindedly focused on giving the driver the most involving, enjoyable driving experience possible, all while exploring new and exciting ways of extracting more performance from fewer resources. But most importantly, the 4C demonstrates that Alfa Romeo can still make gorgeous, emotionally involving cars, and that gives all petrolheads a reason to rejoice. I want one, and I’ll get one – as soon as I’ve found a good chiropractor and an audiologist…