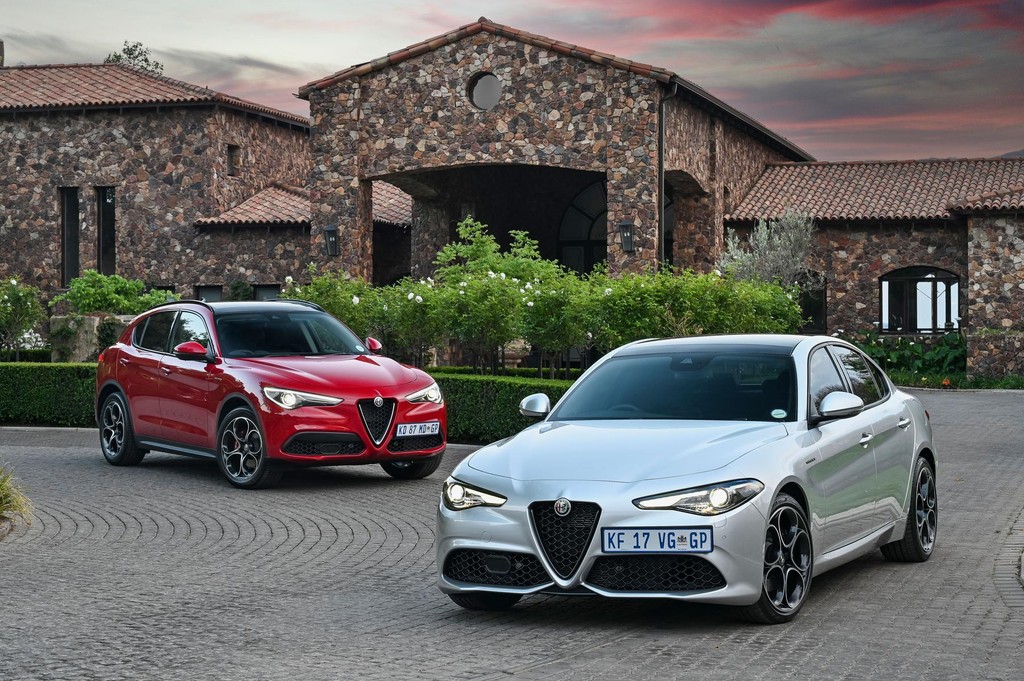 We don’t often hear from Alfa Romeo, but when we do, they almost certainly have something interesting to announce. For starters, their Stelvio SUV was recently announced as one of the most affordable vehicles to own in the Executive SUV class, according to the AA Spare Parts Pricing Guide. Aside from that, we were fortunate enough to get a firsthand experience of the updated Alfa Romeo Stelvio as well as its sedan sibling, the Giulia.

The long winding roads of Hartbeespoort in the North West set the scene for some thorough testing of the two performance-orientated vehicles. But before we talk about what these Italian cars are capable of when unleashed on some of our finest driving roads, let’s have a look at what’s new.

Instead of sifting through a long list of optional extra’s when purchasing your new Alfa (which will inevitably hike the final price to a different bracket), the brand has fitted their updated range with comprehensive features so that you only need to pick the variant that has the tricks and toys you need.

The Stelvio is split into two variants, a Stelvio Super and a Stelvio QV. In the top-spec Stelvio QV, you’ll find features such as Adaptive headlamps, upgraded brakes and Quadrifoglio badging. Having received the same treatment, the updated Giulia is also available in two grades, a Veloce and a jacked-up Giulia QV. With both models, the main thing which sets the model grades apart is their engines. The QV versions of the Stelvio and Giulia both have larger and more potent powertrains.

Two engines are responsible for running things in both the Alfa Romeo Stelvio and the Alfa Romeo Giulia. There’s a 2.0 turbo variant that’s capable of producing 240 kW and 400 Nm – this is the engine fitted to the Stelvio Super and Giulia Veloce offerings. For a 2.0 four-cylinder block, it punches above its weight on paper as well as on the road, offering punch in the low and high range. If you feel as though this may not be enough to quench your craving for tar-scorching performance, then you may want to take a look at the V6 unit residing in the QV variants of both cars. The Stelvio and Giulia variants with the 2.9l V6 engine have an output of 375 kW and 600 Nm, which should be plenty to tickle your inner race driver. A zero to 100 km/h time of 3.9 seconds is what’s offered by the Giulia QV, which will accelerate to a top speed of 307 km/h before running out of breath. You can expect a sprint time of 3.8 seconds in the Stelvio QV, and a top speed of 283 through its all-wheel-drive system.

During the local launch of both these vehicles, only their 2.0 versions were available for us to sample and they did not disappoint. The Alfa Romeo Giulia and Stelvio are known for their above par driving dynamics and driving them back to back, you’re able to pick up on the similarities as well as the subtle differences. Although the Giulia felt quicker, being the lighter car, running through the twisties at full momentum wasn’t what we expected. Its suspension isn’t as road-hugging as we anticipated, and it leans more towards the softer side. This isn’t what you need for spirited driving, however, it makes for a lovely daily ride. Having said that, the sedan offers sharp and precise steering – a contrast to its compliant suspension. Surprisingly though, the Stelvio SUV is the one with dynamic handling and confronts winding sections of road with unyielding confidence. When running through the twisties in this SUV, it gives you a boost in confidence which allows you to push harder through the next bend. We’ve always known that the Stelvio had this hidden talent, and this experience was a timely reminder of its capabilities. The one thing we can appreciate about both vehicles is the steering column-mounted shift paddles. They’re fixed for easy work under pressure and large enough to access no matter where your hands are on the wheel.

Despite not having a glowing past, Alfa Romeo is back under the care of the Stellantis group and we’re excited about their latest offerings as well as what’s to come. Speaking of which – the flame-spitting Alfa Romeo Giulia GTA has been confirmed for South Africa, and 5 units are already spoken for. As things stand, these may be the only examples headed for Mzansi.

How much is an Alfa Romeo?