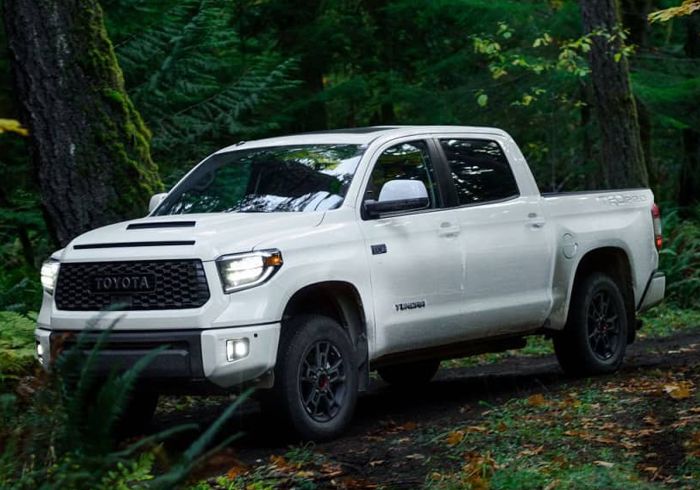 For most South Africans like myself, this is the first we hear of the name Toyota Tundra. This vehicle was introduced into the pickup/bakkie market 13 years ago by the Japanese automaker. The company is now ready to introduce the latest model which promises to be more tech savvy and better looking.

A few pictures have been shared of what this new model may look like. These images were produces based n the information given about the upcoming Tundra.

It bares a lot of resemblance to current Toyota vehicles. Some of these similarities include the headlights which are reminiscent of the Toyota RAV4, the only difference may be that they are a bit larger and more fitting for the Tundra.

It is most likely that the new Toyota Tundra will make use of a twin-turbocharged 3.5-liter hybrid V6 engine which produces up to 355 kilowatts-So you better believe that this new addition to the Toyota family comes packing. There has also been murmur of their being a Tundra Hybrid which will add an electric assist to the engine.

Most likely the 2020 Toyota Tundra will top its standard security of the earlier years. These security highlights incorporate a prevention framework with passerby detection, lane departure alert, unique radar cruise control, and programmed high beams. At the point when the prevention system is actuated the driver is incited by a sound and visual alarm and brake assist might be initiated. The path takeoff ready uses a vehicle camera that recognizes the yellow and white line markers out and about. The most intriguing safety highlight is the radar cruise control in light of the fact that not exclusively will it enable the driver to journey at a specific speed but it is savvy enough to check the separation between the Tundra and the vehicle before it.

Although we cannot be sure of when Toyota will release the new Tundra to the public, we do hope that it too has a long-life span as that of its previous model. We also hope for the Tundra to be released with various specs, giving the consumers more options to choose from.

Most South Africans were excited and receptive of Toyotas latest offering which was the Toyota Hilux Legend 50. If the Toyota Tundra is to make it to our shores, we can only hope that our consumers be as receptive and enthusiastic. Toyota has always delivered when it comes to their bakkies so I can’t help but be excited about this one.