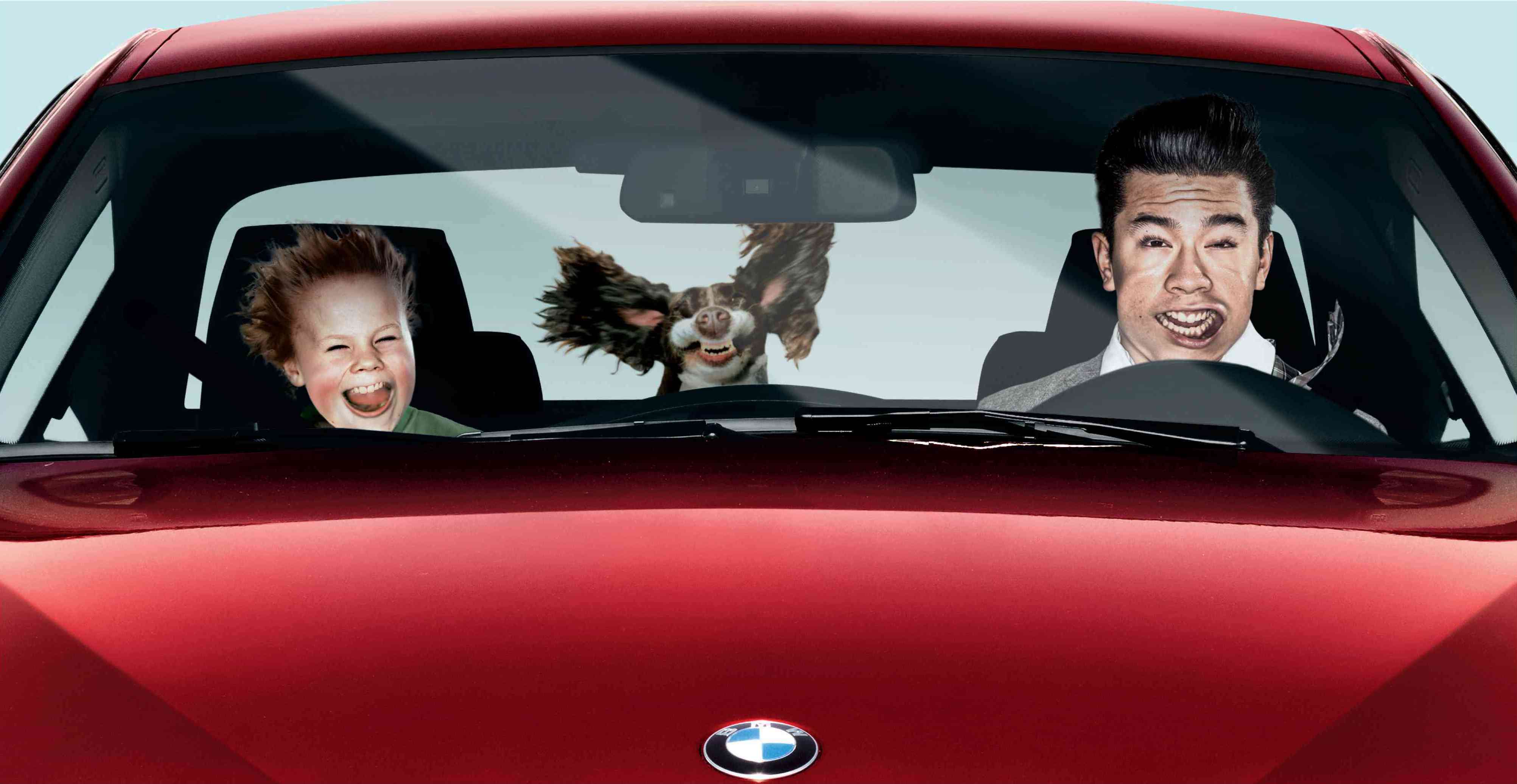 A few manufacturers partook in the trickery that marks the first day of April. From a Mini fueled by tea to faux fur car coats, the world’s automative marketing folks donned their creative caps to offer some April Fool humour. Take a pinch of salt and read on. 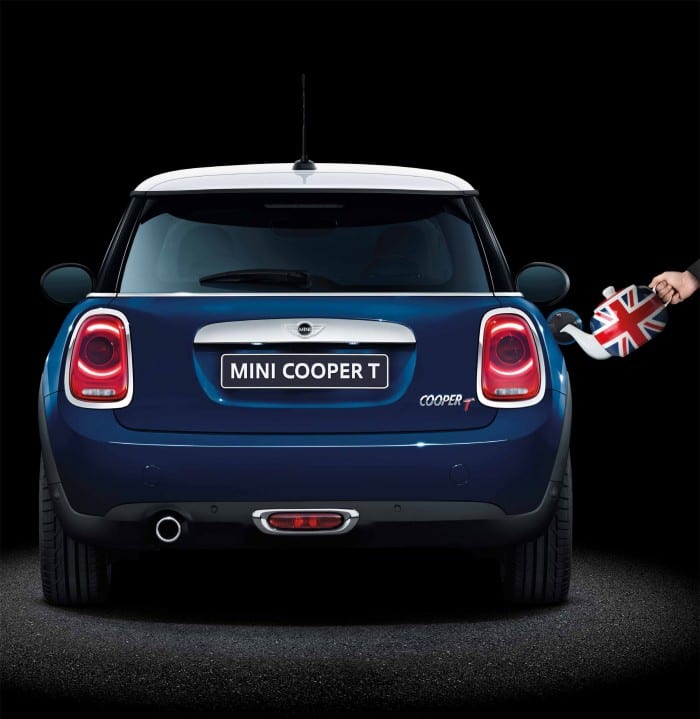 Yesterday Mini announced the world’s first vehicle to be powered by a tea-leaf biofuel composite. They even developed a range of aptly-named colours including Earl Grey, Red Bush and Chamomile Yellow. The folks from Mini said it can do 64 kilometres on a single cup. And that it also boasts Dunk Avoidance Technology (DAT) which uses a filtration system to prevent people dipping biscuits into the car’s fuel tank. “Our extensive research has shown that Britain’s favourite drink is also an ideal biofuel,” said head of engineering, Dr. Ivana Kuppa. 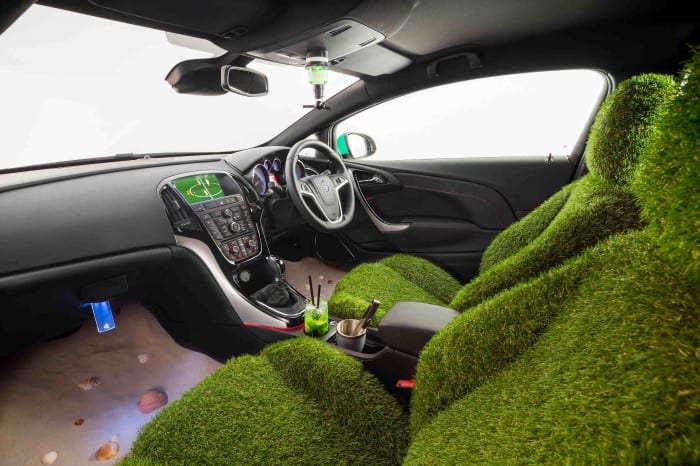 Her name was Astra, she was a jokester. Sorry. We couldn’t resist paraphrasing the Barry Manilow song of the same title. The Copacabana boasts seats upholstered in grass from the famous  Maracanã Stadium. Instead of carpets on the floors you’ll find “the finest” beach sand. And there’s a pair of sandals in the cubby. According to Vauxhall (that’s Opel in British speak) the Copacabana dashes from standstill to 100km/h in 2.6 seconds. The horn provides a Vuvuzela tone and completing the package is a vending machine that churns out virgin cocktails. 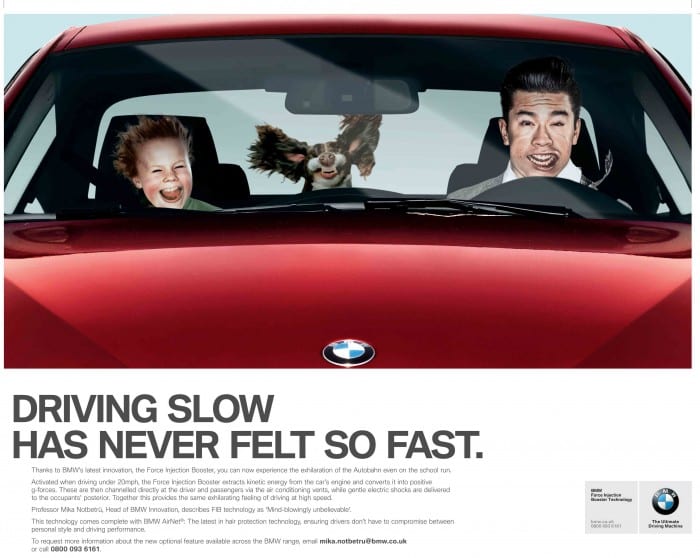 The German automaker showed their lighter side, detailing a piece of new technology named the Force Injection Booster. FIB is an appropriate acronym. According to BMW, FIB simulates the effects of spirited driving even when commuting at lower speeds. It “works” by extracting kinetic energy from the car’s engine and converting it into positive g-forces. These are then channeled directly at the driver and passengers through the air-conditioner vents while a mild electric current is delivered through the seats. Its effects are detailed in this picture. But BMW says face alteration is not permanent. According to Professor Mika Notbetrü, head of innovation, it’s “Mind-blowingly unbelievable”. We can’t disagree there. 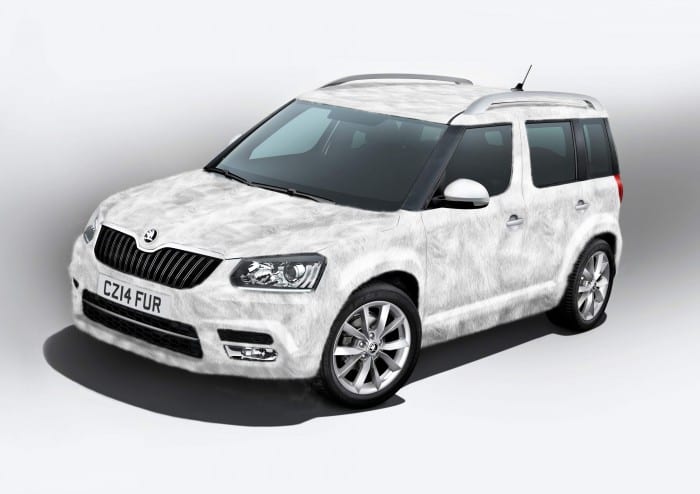 Skoda is a division of the Volkswagen Group whose models we don’t get in South Africa. The Yeti is an MPV-cum-Crossover which is popular in the UK market. Yesterday the manufacturer announced that a Yeti Ice edition would be launched, with a “radical” new faux fur finish. Their spokesman Dr. Yu Ciddingme said, “The fur is so thick and luxurious that during our tests in the arctic circle, drivers didn’t need to used the heater”. Personalisation would be offered too, including side-partings and fur extensions. How do you keep it clean? Skoda says they’ll throw in a special shampoo, conditioner and a brush kit.