BMW has built a solid reputation on the pillars of outstanding driving dynamics, high performance and striking design: more often than not, their cars are endowed with engaging, sporty handling and enough power to turn them into exemplary long-distance cruise missiles. These traits are especially appreciated on a hasty dash to the airport, across two mountain passes, in the rain, and through a magnificent Cape Town traffic jam. Fortunately, we’re driving the new BMW 228i Convertible: 180 kW and 350 Nm, a manual gearbox, and rear wheel drive promise to be true to BMW’s core values.

Based on the 2-Series Coupé, the Convertible retains its RWD format, and offers a choice between two gearboxes: a 6-speed manual or ZF’s customarily excellent 8-speed automatic. You can also specify the auto as a Sport Automatic, which features software changes and gearshift paddles behind the wheel. It borrows its range of three petrol engines from its Coupé sibling, with no option of a diesel.

Starting off the range is a 2.0-litre four-cylinder turbo engine in two states of tune: a 220i with 135 kW and 300 Nm, and a 228i with 180 kW and 350 Nm. The range topping M235i features BMW’s evergreen 3.0-litre straight-six with a single turbo-charger. Slightly tweaked for 2-Series duty, it delivers 240 kW and 450 Nm – enough for a 0-100 km/h sprint time of 5.2 seconds in manual form. Interestingly, the 2-Series is both quicker and more frugal with the automatic gearbox, with the M235i automatic cutting the sprint time to five seconds flat, and dropping its official fuel consumption figure from 8.5 to 7.9 ℓ/100 km. 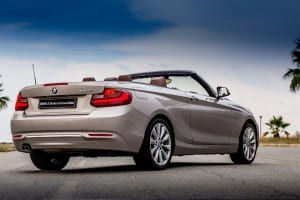 Compared to its 1-Series Convertible predecessor, an increase in length and width frees up extra interior space and expands the boot by 30 litres. Rear seat space is still very limited, but the front seat occupants will find more than enough room to stretch out. The cabin’s layout is normal 2-Series fare, with nice materials all round and very good build quality. As usual, the iDrive display screen (up to 8.8-inches in size) is perched above the centre console, and gives access to the usual multi-media systems and car controls. BMW’s suite of ConnectedDrive convenience and remote assistance services are also available.

Instead of the larger 4-Series Convertible folding hardtop, the 2-Series uses a traditional canvas roof. While this arrangement takes up considerably less luggage space when folded, it can’t quite match the noise insulation of a solid roof. That said, BMW has redesigned the soft top, which results in a 5dB reduction in interior noise (with the roof up). It’s certainly cozy and quiet enough with the roof up to enable long road trips.

Those road trips will be more enjoyable with the roof down, though – an operation that takes all of 20 seconds to accomplish, and can be performed at speeds up to 50 km/h. A wind deflector can be clipped in behind the front seat to cut down on noise and buffeting in the cabin when the roof is down. The deflector works well up to the legal speed limit, but wind noise becomes very intrusive at higher speeds.

As for the handling abilities, we had opportunity to really put the 228i through its paces on some winding roads. For starters, a stiffer body shell gives the suspension a very solid base to work from. The steering wheel might relay a slight tremor over uneven surfaces, but the car as a whole feels impressively solid – there’s very little traditional cabriolet body flex in BMW’s smallest rag-top.

While it’s probably inadvisable to specify the optional 18-inch rims and M-Sport suspension package, the ride quality on the standard suspension and 17-inch rims is pleasantly compliant. Even so, body roll through the corners isn’t much of an issue even on a seriously twisty road: there is an abundance of road grip, and the stability control system even allows the car to perform slight, controlled drifts before intervening. Steering feedback is pretty good for an electrically assisted system, but lacks that last frosting of tactility when you’re really pushing on.

And push on, we did, for it’s very difficult not to. The 2.0 litre turbo-engine doesn’t have much in the way of a soundtrack, with only a muted thrum from the engine compartment and a noise like an angry leafblower emanating from the exhaust, but it really gets the job done. The 228i’s 0-100 km/h dash in 6.1 seconds (with a manual, the auto only needs 6.0) is impressive enough, but the power spread is an eye-opener. It starts pulling strongly before you have 1500 r/min dialed up, and just doesn’t stop until the limiter stops the festivities at 6500 r/min. As a result, the 228i is effortlessly quick on real roads and a very quick when overtaking slower traffic. 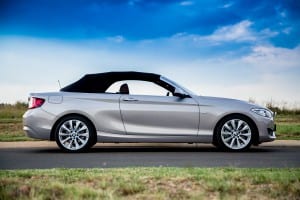