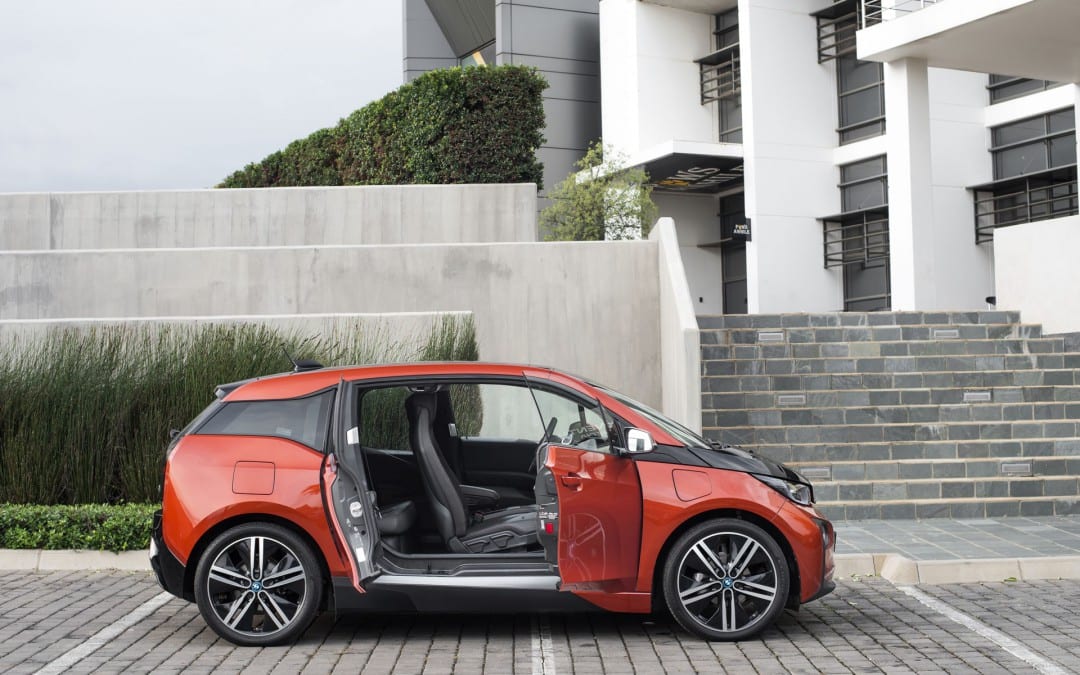 Optional trim packages named “Loft”, “Lodge” and “Suite” clearly describe the target market for BMW’s newly-launched i3. It’s meant for city dwellers, people with a short commute but a strong eye for design and detail. It certainly looks unlike any BMW that’s come before it, and it shares nothing with any of their mainstream cars. Everything about it is outlandish: from its unusual proportions to the way it’s constructed, the i3 is a completely different kind of BMW. It’s also one of the first building blocks for BMW’s new sub-brand, named “BMW i”.

That single letter “i” is far from a mere marketing gimmick, for it signifies a whole new family of BMWs which emphasise sustainable future mobility and reduced environmental impact. Every BMW i-model will rely heavily on electrification, be it battery power only (as in the i3), or some level of hybridisation (as in the i8 sports car). There’s already talk of an i5/6 model to take the fight to Tesla’s Model S, and going on first experience with both i3 and i8, BMW is dead serious about taking on the electric-car market (EV’s for short) – and winning. 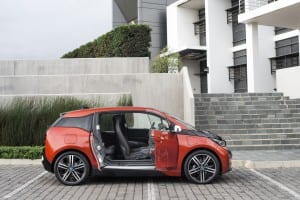 The i3 uses BMW i’s signature LifeDrive construction technique, with an aluminium frame supporting the drivetrain and suspension, and a carbon-fibre cell for the passengers and luggage. The batteries are mounted under the floor, and the electric motor lives between the rear (driven) wheels. This construction results in a kerb weight of only 1195 kg – extremely light for an EV – and complies with BMW’s safety standards.

So is the i3 still a real BMW, or is it just something shiny, new and different for early adopters? The answers become apparent as soon as you open the door to get in. It might have four doors and a hatchback, but the layout is unusual: the rear doors open front-to-rear, just like those on a Mazda RX-8 (or a Ford Ranger SuperCab), meaning that access to the rear seats are only possible when the front doors are open as well. It shouldn’t be too much of a bother though, because rear accommodation is somewhat limited, leaving those seats for occasional use only.

But most of the attention should be focused on the front part of the cabin in any case: in lieu of the usual soft-touch plastics and swathes of leather, the dashboard and door cards are made from recycled fibre and open-pore wood trim. You won’t find a conventional instrument cluster either. There’s a small tablet-like screen ahead of the driver to display the car’s operating information: a battery range indicator features prominently, along with the speedo and some cool graphics that inform the driver if the current driving style is economical or not. The gear selector is mounted to the right of this instrument display, and BMW’s normal iDrive display unit takes its customary pride of place atop the centre console. 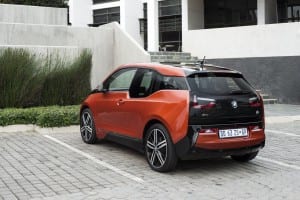 And eventually, it all comes down to the driving style. If you flatten the accelerator pedal regularly, the instrument display will flash all manner of warnings, reminding you to take it easier behind the wheel. Because, although the i3 is touted as having the performance one would expect from a BMW, using that performance will incur the penalty of a severely reduced battery range. The 0-100 km/h sprint can be dispatched in 7.2 seconds, but be aware that doing so too frequently will most likely halve the claimed available range of 180km.

With that said, if you only have a short daily commute, you can hoof it (because the next recharge point isn’t that far away) and enjoy strong performance for about 1/5th of the running cost of a conventional car. You shouldn’t expect genuine BMW driving dynamics on the road, though: the i3 might be rear wheel drive, but those skinny, energy-efficient tyres don’t have a lot of grip, and the i3’s tall-but-narrow design leads to a fair bit of body roll and a sensitivity to gusting cross-winds.

Those with a longer commute can specify the optional “Range Extender” (REX) version of the i3, which adds an additional, rear-mounted 2-cylinder petrol engine with the sole task of driving a generator to replenish the batteries. There is no physical connection between the petrol engine and the driven wheels, which means that propulsion remains staunchly electrical. The REX adds R70 000 to the i3’s base price of R525 000 and slows down the 0-100 km/h sprint to 7.9 seconds (due to its weight penalty), but does extend the i3’s range to a possible 300 km. This isn’t a car for that family vacation in Durban, remember… 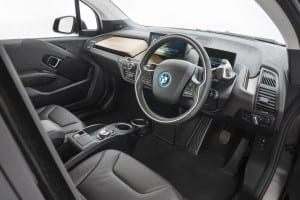 As for actually charging the batteries (discounting the range extender), there are three options available to the i3 driver. It can be charged from a normal 220V wall socket, in which case it takes between 6 and 8 hours to “fill up”, or an optional (R25 000) wall-mounted charging unit can be installed to cut the recharging time to around 3 hours. There are also quick-charging stations at selected BMW dealerships, which can take the battery from 15% to 80% in less than 30 minutes, should a top-up during the day be necessary.

And this is where things get really clever: BMW also developed a smartphone app which communicates with the car to inform the driver of the current battery charge condition, among a host of functions. In addition, the i3 “knows” where it is at all times, and can show the driver a list of charging points within range, whether they’re occupied, or when they’ll be available to use. Add the full suite of BMW’s ConnectedDrive functionality (with some standard components and some subscriber-only features), and it’s clear that the i3 will look after its driver as well as any other BMW would. 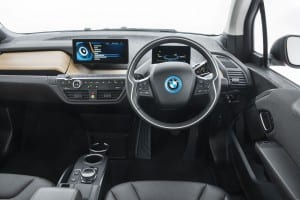 The BMW i3 is (for the time being, at least) mostly an intriguing trinket for the fashion-conscious, and it won’t be at all useful for the many drivers who cover long distances. It might not really be the car for a South Africa that reels under the pressure of a constrained power grid either, but as a pointer towards the future of commuting, it certainly puts a spark to the flame of inner-city driving. By the same token, it shows an impressive commitment from BMW to move ahead of the times and outside their comfort zone. It certainly puts a new spin on the EV theme, being developed from scratch to run on electrons and nothing else. And when the big battery revolution happens (and it’s bound to, sooner or later), BMW will be ready. – Martin Pretorius