BMW’s 128ti has been set loose, and it’s going after the Golf 8 GTI 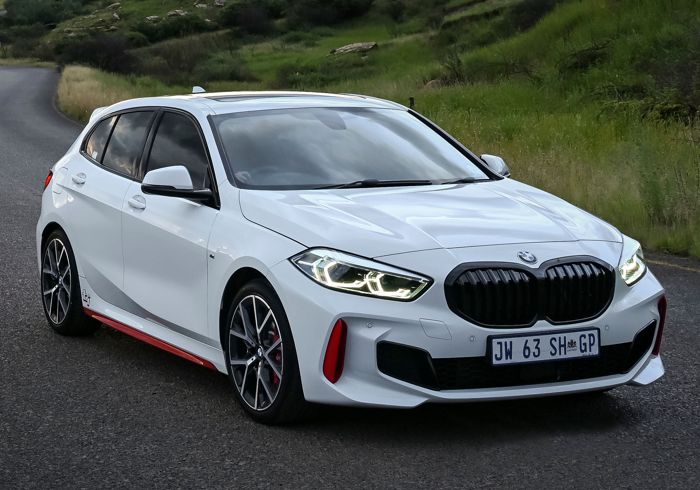 When BMW announced that they would be introducing a front-wheel-drive vehicle in the form of the 128ti, they were met with doubt and criticism. The brand has always been synonymous with rear-wheel-drive cars that offer a certain driving feel and experience, so the 128ti hatch was somewhat of a wildcard, and wildcards are always anything but dull.

Now before we get carried away with all the meaty details, let’s understand the name behind this unique BMW. You may be hearing of the “TI or ti” title for the first time but its roots date back to the ’90s. The acronym stands for “Turismo Internazionale” which was the name given to performance models such as the BMW 2002 TI back in 1968. In 1997 the brand also introduced the 325ti, and fast forward to 2021, we have the all-new 128ti joining us and it promises to be different.

They’ve taken the body of a standard 1-Series and added special seasoning to it. In the 128ti you get M Performance styling but with a slight twist – red accents in the front bumper and side skirts as well as “ti” lettering to remind you that this isn’t the standard hatch. Of course, that’s not why you would purchase one of these, not at all. Fortunately, BMW has put in some real work in this new hot hatchback. You see, when they went about creating this they had one vehicle in their crosshairs, the Volkswagen Golf GTI – and so they went to work.

Beneath the bonnet, they dropped a 2.0-litre 4-cylinder engine capable of 180 kW and 380 Nm, and with a 0-100 km/h sprint time of 6.3 seconds. After giving it the once over they felt that it was good. Next was the vehicle’s suspension, an M Sport variant specifically tuned for the 128ti hatch, and includes a Torsen limited slip front axle differential for improved cornering. Finally, M Sport brakes and sports tyres were fitted to ensure that the new hot hatch was as performance-ready as could be. So how does all this translate on the road?

The BMW 128ti isn’t your conventional BMW when it comes to handling and driving dynamics, it doesn’t have that firm and planted driving feel found in most beamers which many of us love and are familiar with. Instead, it feels lighter and noticeably more agile than what you would expect from a Bavarian machine. The setup is more like that of a conventional hot hatch but with a mysterious fun factor. When driving it the way it desires to be driven, the 128ti is responsive under acceleration and corners with agility and precision. It’s that limited slip differential they’ve bolstered on. It makes the front of the car feel very lively, unlike its nemesis the Golf GTI, which is more of a “point and squirt” hot hatch. Torque steer is a real thing here, even at speeds of over 100km/h, however, the 128ti doesn’t lose any brownie points because it’s a manageable torque steer, and honestly, it adds character to the car. Ride quality has been compromised with this tweaked suspension – and is rather firm and choppy, giving feedback on nearly everything on the road surface. At higher speeds, the front-wheel-drive Beamer sometimes finds itself jolted by random kinks and bumps on the road.

When giving the 2.0-litre engine the nod, the Germans overlooked one crucial element – engine sound. The 128ti may be sporty in its credentials and performance, but it lacks the growl you expect from a performance hatch. Engine and exhaust noise is non-existent here, not a pop or a crackle to be found, even in its sportiest setting. Potential owners may find themselves turning to performance exhausts for the missing piece of the puzzle. From a driver engagement and performance perspective, the upcoming Golf 8 GTI may have its hands full if our brief stint with the 128ti was anything to go by.