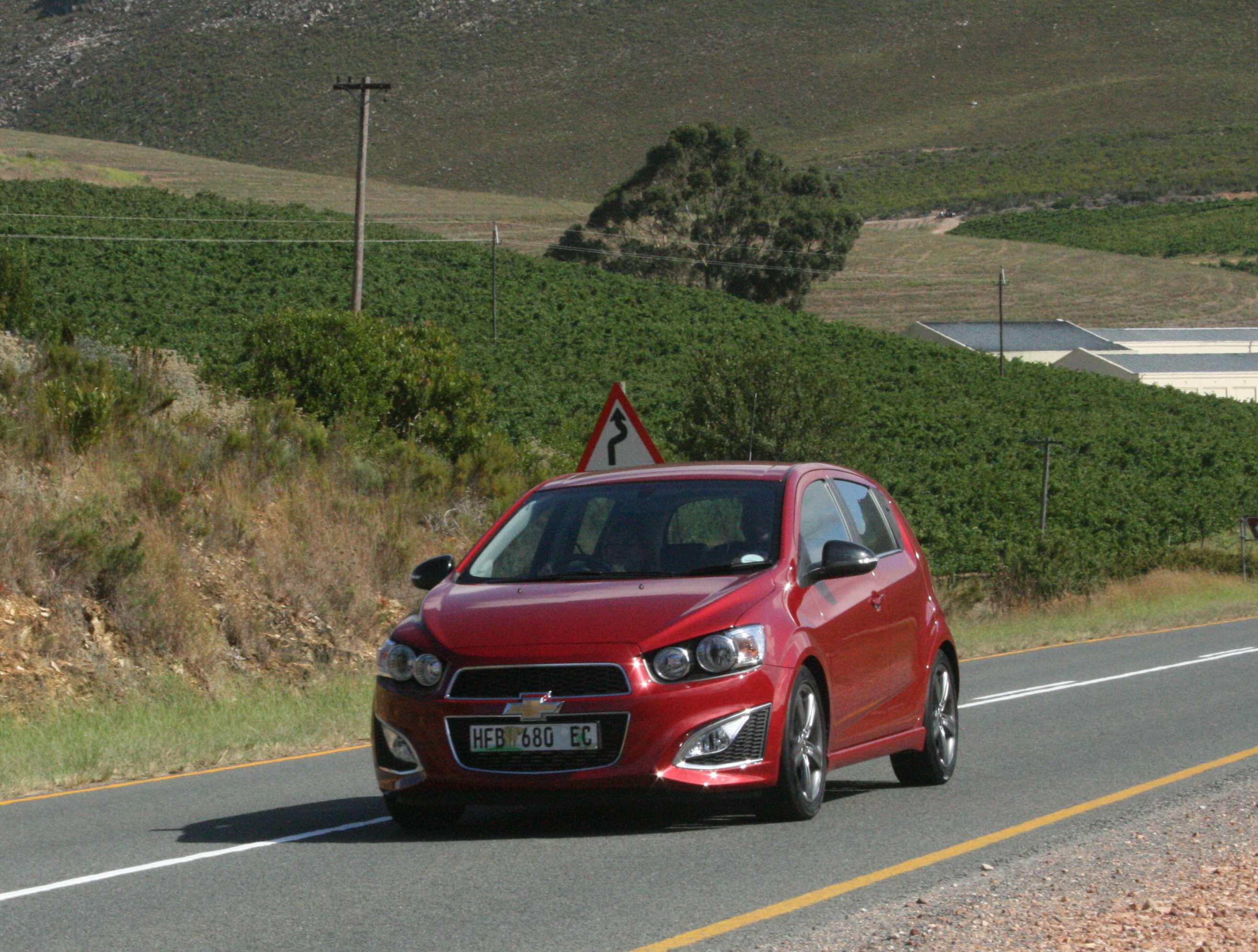 The Chevrolet Sonic has finally received an engine that does justice to its name. Until now the derivatives on offer – while frugal – have rendered its swift-sounding title little more than a misnomer.

This RS is realistic about its ambitions and does not aim to beat loftier rivals like the Opel Corsa OPC, Volkswagen Polo GTI and Renault Clio RS. Instead it was designed and priced to serve buyers who want the show and (some) go at an affordable price. 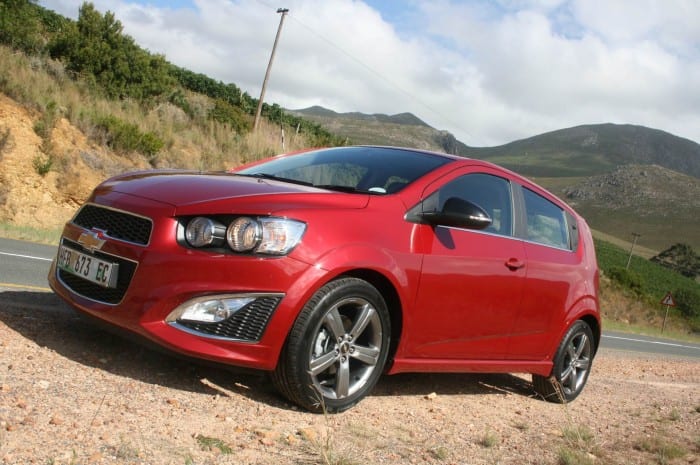 From General Motors’ ingredients cabinet, its 1.4-litre turbocharged engine is a familiar taste, having garnished cars like the Opel Astra and Chevrolet Cruze. At the coast this Sonic showed eager punch. And thanks to forced-induction, it’ll give the normally-aspirated Suzuki Swift a run at Johannesburg’s altitudes.

Where it might lose to the Japanese rival is in the area of handling. This depends on buyers’ preference. The Swift Sport has a typically firmer ride. It feels sharper too and conveys a more agile persona overall. Whereas this is on the supple side.

The Sonic has a weighty steering, but we would appreciate greater road feedback. A compliant suspension tackled the sinuous roads of the Western Capes without drama. Tyre roar and wind nose became intrusive at higher speeds however. 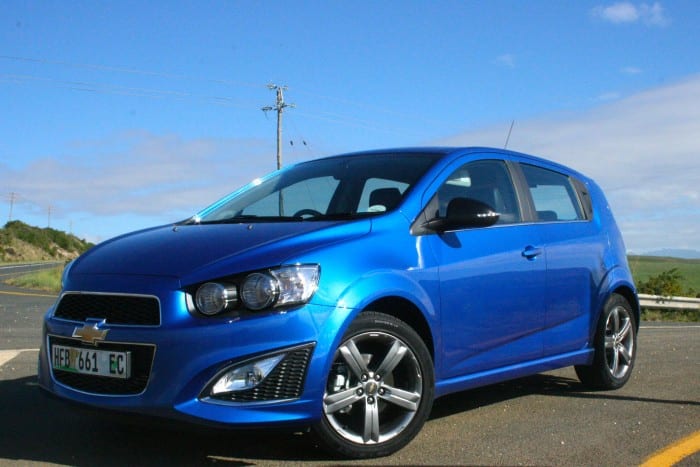 It builds on what is already a handsome looking package. While the Sonic hatchback isn’t the best-selling offering in the B-segment, it certainly boasts more character than alternatives like the Volkswagen Polo and Toyota Yaris.

Those opting for the RS will find a good base for some modifications. Go-faster stripes and Transformers-inspired livery would suit it well. 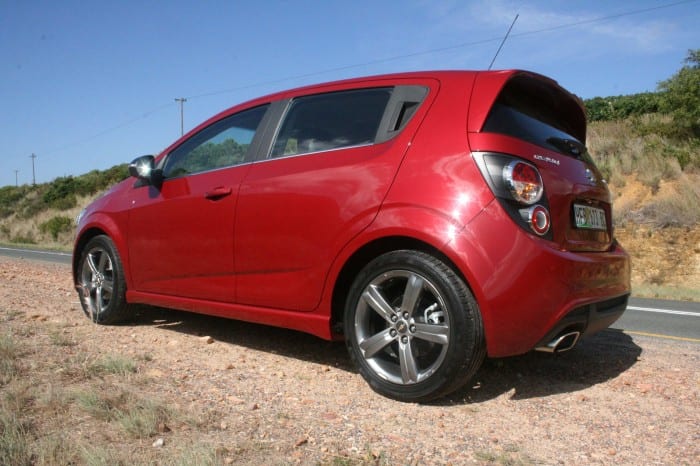 A big selling point is the new MyLink infotainment system. This is Chevrolet’s equivalent to BMW iDrive or Audi’s MMI. And the Sonic is the first model to be equipped with the new interface.

We enjoyed aspects like the satellite radio and podcast playback ability, which will undoubtedly make driving in traffic a little more entertaining. The conduit to all its capabilities is a colour touchscreen.

The interior will inspire excitement among the younger crowd. It has the same steering wheel as the Camaro muscle car, sculpted seats with suede inserts and even pedals that look like they belong on a track racer.

Everything is part of the package, from the funky digital interface, to leather upholstery, cruise control, Bluetooth, voice control and an unnecessarily large button for traction control deactivation. 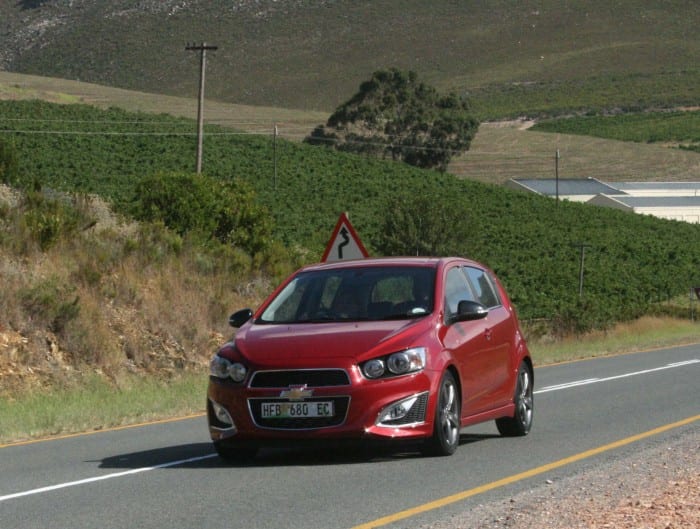 Things look good for the spicy Sonic, with its reasonable asking price of R225 300. It’s slightly more expensive than the direct rival from Suzuki, which goes for R223 900. But for that extra R1400 you get a whole lot more. It poses a strong argument to buyers who want a hatchback with a bit of heat; but not enough to burn significant holes in the budget.