Does the Golf GTI TCR have enough Vrrrpha to warrant the extra Rands? 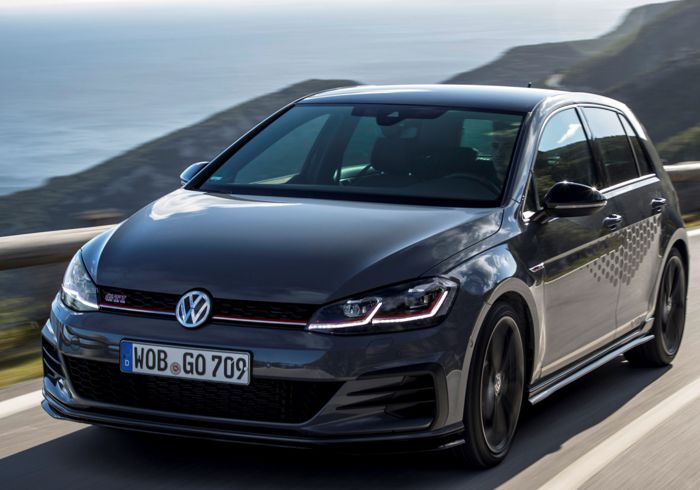 In the South African hot hatchback segment, the Volkswagen Golf GTI has arguably become one of the most popular contenders over the years. We suspect that after it was dubbed the vrrrpha, Volkswagen South Africa saw a steady climb in the model’s sales figures. To put South African’s love for this vehicle into perspective, we are one of the top 10 markets for the Golf GTI in the world. With the Golf 7’s lifecycle coming to an end after a successful eight-year run, Volkswagen has given us one final (potent) dose of their popular hatch in a TCR variant, and only 300 of them will be sold locally.

What are the differences between the Golf GTI and Golf GTI TCR?

Well, we thought you’d never ask! The new TCR is essentially a Golf GTI but with more of everything! From the outside, it’s instantly recognizable by a few elements: the checkered flag/honeycomb-like decals on either side of the car, a different set of black mags and mirror caps, a gloss black front splitter, and a rear diffuser to complete the look. Additionally, the VW Golf GTI TCR is only available in three colours: Pure White, Tornado Red and Pure Grey. Anything outside of these colours and without the above detail is probably not a TCR.

Some minor changes have been made to the TCR’s interior to set it apart from the standard GTI. While most of the interior is still inherently a GTI, design elements in areas such as the seats have been tweaked. Front and rear seats in the limited-edition vehicle make use of a combination of materials. Cloth, Alcantara and a leather-like finish are all found on the seats, the centre of which features 3 red stripes running vertically. Everything else has remained unchanged with the exception of a small sticker on the dash with the vehicle number out of 300.

Normally when car manufacturers bring out a limited edition variant of a vehicle, updates on the vehicle rarely ever exceed cosmetic accessories. The engineers in Wolfsburg took things a step further and applied changes where it matters in a performance vehicle – the engine. In both the standard Golf 7 GTI and the GTI TCR you’ll find a 2.0-litre four-cylinder engine, but not all things are created the same. In the standard vehicle, power figures indicate a fair 169 kW and 350 Nm, with a 0-100 sprint time of 6.4 sec. Top speed here is electronically governed to 250 km/h. In the TCR, the Germans took this very same engine and sprinkled some hot source and Lord knows what else,  jacking it up to 218 kW and 380 Nm going to the front wheels. It’s also quicker under pressure, doing the 0-100 km/h dash in just 5.6 seconds before reaching a top speed of 264 km/h.

With these engine updates, the TCR feels quick and pulls hard under full acceleration, it’s an adrenaline-inducing kind of acceleration and we enjoyed every moment with the pedal down! It does, however, need some refining in putting that power down effectively especially from standstill. Even with launch control activated, the TCR still sends the front tyres into a screaming frenzy all the way into 2nd gear. We drove the Hyundai i30 N at the end of 2020 and were left impressed by its driving dynamics and solid handling. It’s a direct competitor to the Golf, and although these two may be in the same class, they have different talents. The Hyundai prides itself in being a thoroughbred driver’s car with amazing handling, tones of driver engagement and the ability to corner like a go-kart on steroids. The VW on the other hand, won’t provide as much engagement behind the wheel or the ability to confidently dive head-first into bends. But what it does do well is acceleration, and this is where the bulk of your driving excitement will come from. It’s a good all-rounder, comfortable enough to use every day because of its softer suspension, and the fact that it’s only available with a DSG gearbox makes the Golf GTI TCR easier to live with in daily traffic.

The Limited edition Volkswagen Golf will cost you around R50k more than the standard GTI (R675 700 at the time of testing). But is it worth the extra money? Yes, it is! From a performance perspective you are getting more, and its real-world performance, not paper figures. You also won’t have to pay for additional features such as heated seats and a panoramic sunroof because they’re included in the base price. Finally, because it’s a limited edition vehicle with only 300 units available, it is likely to retain or go up in value. In fact, there are some  GTI TCR’s already retailing for more than the manufacturer’s price in the used market.

Golf 8 GTI is the next chapter in the GTI story – due in the second quarter of the year. It will have to prove itself against BMW’s all-new 128ti, which is fiercely gunning for the GTI’s slice of the segment.