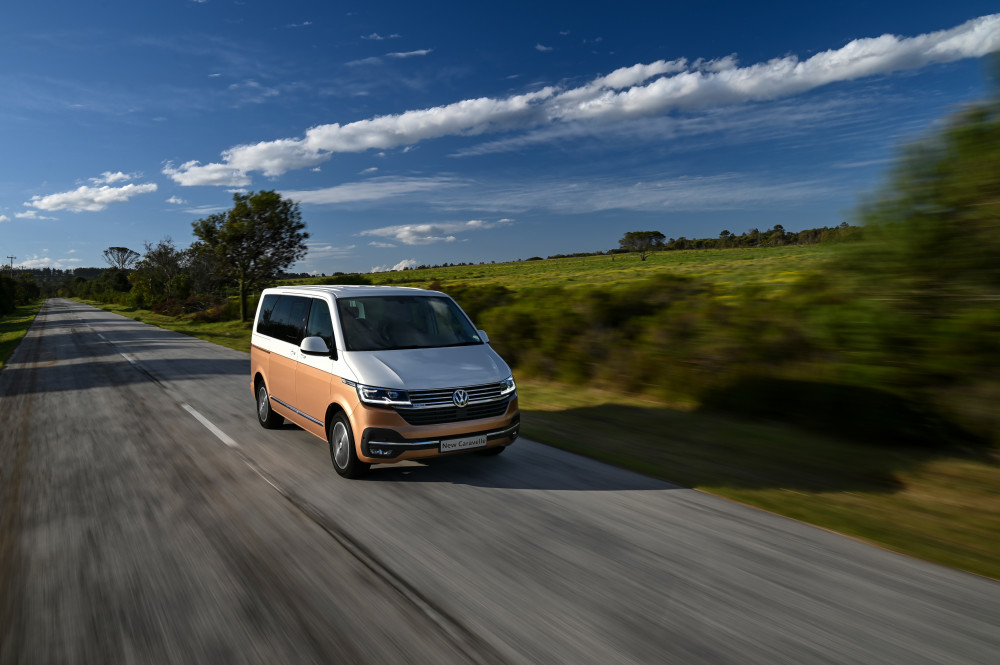 Do you remember the ‘90s Volkswagen Caravelle? Yes, you know the one we’re referring to. Many of them are still running around even today and are generally seen sporting a dropped suspension and low-profile wheels, among other modifications. This was an iconic car and loved by many during and even long after its time, the bus even earned itself the name “Caracara”  short for Caravelle, and had a song named after it by South African rapper, K.O. While we continue to celebrate these old classics, we also must appreciate the new vehicles and tech that is coming out of Volkswagen today.

The Caravelle, now in its 6th generation is still very much the people mover that it was two decades ago, just with modern features and technology. From the outside, it may not look as fashionable as Mercedes-Benz’s V Class especially when kitted with the AMG kit, but it sure does look premium, more so with the two-tone colour combination. Aside from this, cars in this class are generally just boxy in shape. The new VW Caravelle now features a pair of daytime running LED lights, which are partially responsible for that premium effect.

In all honesty, people who are in the market for a vehicle of this nature are less concerned about looks than they are about practicality, space and comfort. interestingly, these are all the things that you find inside the Caravelle.

It is a proper seven-seater, and what we mean by that is it has two full-size rear seats that can accommodate two adults comfortably. Having spent some time with the Caravelle, the one thing we can confidently tell you is that its interior is where the business is at – it’s the reason why someone buys this car. The seats are upholstered in leather and each one has its own set of height-adjustable armrests, except for the last row at the back, which can accommodate three grownups comfortably. This is a very spacious car, it’s so commodious that you can move from the drivers’ seat to the back seat without having to exit the vehicle. Halfway there, you’ll encounter the retractable table, which is stationed in the centre of the car and can be moved forward or backwards. Pre-Covid, one could have hosted a business meeting in the back of the Caravelle, simply turn the second row of seats 180 degrees to face the rear and unfold the table between the two rows of seats.

To enter and exit the rear of this VW, you can use the electronic sliding doors on either side of the car. Simply give the handle a gentle tug and it does the rest. You can also use the remote key fob or the dedicated buttons on the dashboard to open and close these doors. This feature never loses its novelty, no matter how many times you utilise it – “look no hands!” Ok enough about that, the point is you can do a lot with that rear space including removing the seats completely which will give you enough space to load up your entire house.

To propel the Volkswagen Caravelle is a diesel engine. Wouldn’t it be cool if it had one of the thudding 5-cylinder petrol variants from back in the day? It did sound good. Anyway, we move with the times and in this modern bus, the German firm opted for a 2.0-litre turbodiesel powerplant to power the full model range (Transporter, Caravelle, California) and it’s apt for the job. At 146 kW and 450 Nm, the diesel engine has enough pulling power to carry its 2-ton weight its seven occupants. It can be a bit heavy on the juice for a diesel derivative, but that’s understandable because it has a lot to haul around.

When looking at purchasing one of these, you can choose between three spec levels: the transporter, Caravelle or the range-topping California. Here’s a look at what it will cost you excluding the panel vans and utility vehicles.