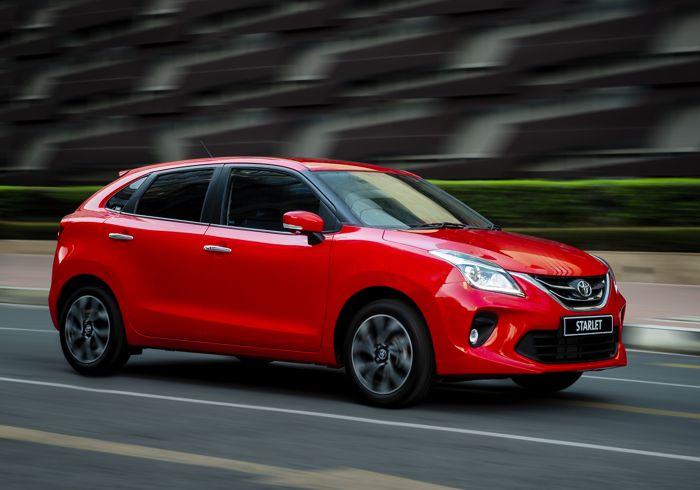 Most people in Mzansi are looking for the most efficient and affordable way to get around when it comes to a car, this is not at the expense of quality of course. Granted, you also want some nice creature comforts to go with your set of wheels. It hasn’t taken long for car manufacturers to figure this out and move quickly to fill the gap in the market. This is what Toyota South Africa has done with the all-new Starlet.

Firstly, lets quickly address the big, grey item in the room – the Starlet looks very familiar and there’s a very good reason why – because it is. You’ve probably seen this exact silhouette and design on the Suzuki Baleno. With mergers and alliances between OEM’s becoming so rife for various reasons, it was only a matter of time before we saw something like this happened, and it comes as no surprise. Toyota spotted a gap in their market and viola – Bob’s your uncle!

On a more serious note, the Starlet is the replacement of the outgoing Etios and a product of an alliance between Toyota and Suzuki. According to Toyota, the two are leveraging off one another’s strengths and what Toyota stands to gain is access to compact vehicles, where Suzuki will benefit in the area of Hybrid technology – an area which Toyota has proven themselves in. These are the official reasons behind the birth of the Starlet.

Let’s take a moment and put the little Starlet under the microscope. We’ll be honest, this vehicle, the same one Suzuki has been producing over the past four years just looks more appealing with a Toyota badge on it. The Toyota name has a history steeped in reliability, and that could be the reason why the Starlet suddenly looks more appealing than its donor vehicle. The unit Toyota sent to us was gleaming in the Starlet’s launch colour, a bright red, which did a great job of accentuating its looks. On the design front, the low stance Starlet looks trendy and athletic, especially in Xr trim when paired with 16-inch rubber on all four corners. We can already see the Starlet doing better than the original vehicle in our South African market – time will tell.

Under the bonnet is a 1.4-litre petrol engine with variable valve timing (VVT) technology. This translates to a car which is ever so cheerful and easy to drive, especially when taking on meagre duties like moving from point A to B. Under strain, the engine is happy to rev out and produce more results. A light steering, clutch and gear shift action add more ease to this little hatch’s driving character. All of this makes it an easy vehicle to live and do daily life with. We sampled the 5-speed manual variant, although a 4-speed auto is available if the left half of your body is not attuned to multitasking.

The Starlet’s interior can’t be compared to that of Fortuner or anything similar – far from it. It’s a noticeably compact and cosey space to be in and offers everything you need in a modern car. A none-leather material covers the seats, and although it isn’t premium hide, it’s of good grade and you won’t miss not having leather upholstery. Your dose of animal hide is found on the Starlets steering wheel. With its multifunction controls which include cruise control, the Starlet feels a little more premium. Full electric windows, mirrors and a touch infotainment screen with good graphics are included in this package. The screen offers passengers the functionality of smartphone integration for Apple and Android devices. CD, Bluetooth, USB and Aux functions are also available for the technologically stunted. Being the flagship Starlet, the Xr is equipped with PDC and a reverse camera, and as an overall package, everything checks out except maybe for the floor mats. Yes, the mats. Come on Toyota, you could do better than black and white striped budget mats! Although, if you keep your eyes on the road (as you should) you won’t even notice them.

Pricing for the all-new Toyota Starlet begins at R204 900!