The new 2015 Kia Soul (Street) is a cross over, but where exactly has it crossed over? It is a tally of modern motoring. Utility, space, and hatch back sportiness. The Korean automakers rebut to the Mini Countryman, the Fiat 500L – more expensive than the Soul-Street, but the Soul perceives more value with its fashionable extras, generosity of accessories and conscious active body styling. 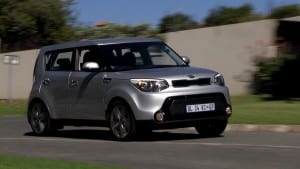 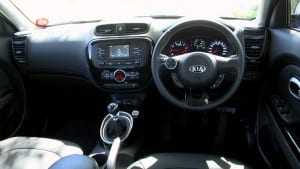 A mood cohabits the Soul’s interior, black gloss accents, chrome bits and dark tones reflect on the dashboard with uniquely placed round/flat-top speakers above the air vents. Yellow stitched, black leather upholstered seats adds an eccentric twist, but with a capture of comfort. The touch screen is the reference point to interface the Bluetooth, AUX/USB functions, operated via the steering wheel controls, (including cruise control), and a Start/Stop button at the base of the gear lever compliment the cabin’s ergonomic function. The designers at Irvine California have utilised every cm3 of space, thanks to a slightly higher roofline – which you would assume inflicts more body roll. 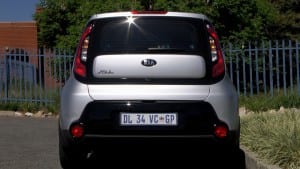 The taut suspension will ever so slightly ripple vehicle occupants; the Soul’s firmer handling dynamics, at high speeds bites into the corners, seldom tapping the brakes as you take to the flare of carving through the s-bends. The Kia’s steering is so light, (some may say vague); the wheel smoothly counter-rotates through your hands after every turn. The six-speed manual gearbox dovetails a talented 1.6L Turbo-diesel, 94Kw engine and volleys a spurting 260nm of torque to the front wheels – a real holidaying workhorse. 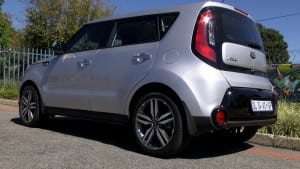 I wish I had the opportunity of also test-driving the 2.0L petrol version, which is cheaper than the R307,900 diesel version and offers a longer stride on the powerband. A striking contrast of physics and horsepower – but that is the only difference of the two. The Soul’s, (Street) diverse crossover qualities fit-in nicely with a mid-exec’ mom or dad, whose family lifestyle accommodates sudden urges of spontaneous visits to the countryside and weekend getaways. The new Kia Soul, (Street) – is exuberance that touches spirit, soul, and Body!