Are you in the market for an SUV? We compare four of our best picks for you. 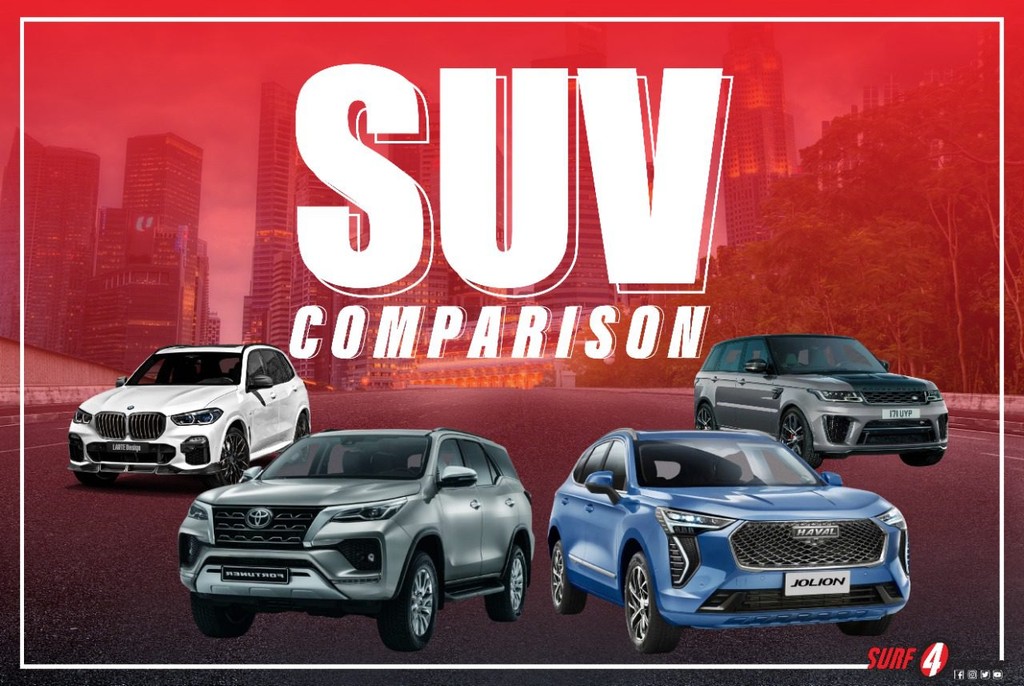 You’re considering purchasing an SUV, and we don’t blame you. The SUV segment is one of the fastest-growing car segments currently. These days, nearly every manufacturer has an SUV in their catalogue, and with so many options, choosing the right one for you and your needs may be overwhelming, which is why we’ve compiled a list of some of the most popular SUVs in South Africa right now. We’ll give you a brief breakdown of each one, and based on that, you’ll hopefully have a better idea of what you need.

Arguably one of the most popular SUVs with South Africans, the Toyota Fortuner is loved for a reason. On the SUV scale, it leans more towards a large SUV, which directly translates to more interior room. It’s perfectly suitable for people with families as it not only offers a roomy cabin but gives you the option of having seven seats. The last two seats at the rear can be folded if not in use, increasing the load volume of your boot. Now because it shares components such as its platform and engine with the Toyota Hilux, the Toyota Fortuner is just as capable on-road as it is on dirt and the rough stuff. If weekends away in the bush are your thing, then the Fortuner will fulfil your needs. Another area where the Toyota Fortuner stands out is in reliability. Toyota’s reliability is unmatched and further to that, these vehicles hold their value very well. The starting price for a new Toyota Fortuner is R600 000, while a used Fortuner in fair condition will go for around R400 000.

This is another popular choice with South Africans but for different reasons. The BMW X5 is a premium SUV and offers stylish looks as well as some of the latest tech and features such as BMW’s Live Cockpit Professional, which is offered as standard in the current X5. Traditionally, a BMW X5 was not the typical vehicle you would want to take into the bush, it was more tailored towards performance and driver comfort. However, in the current X5, you can opt for an off-road package that includes knobby off-road tyres and blacked-out alloys, but be warned, it does take away from the X5’s aesthetic appeal. If you’re leaning more towards this German SUV, then you should know that the 30d or 50d variants are the ones to get – they’re powered by what is arguably the best diesel engine on the market when it comes to economy, performance and torque delivery. At 620 and 760 Nm respectively, torque is delivered linearly from its 6-cylinder engine, making overtaking and accelerating from any speed effortless. For a brand new out-of-the-box X5, you can expect to pay a starting price of R1 414 682, while a modern used version will cost you from R500 000 upwards.

For an ultra-luxurious experience, look no further than the Land Rover Range Rover. This vehicle carries the weight of the Land Rover name and brand, the Range Rover nameplate itself carries significant weight. This vehicle is the most expensive on our list, and for good reason. Land Rover has a rich lineage of extremely capable off-road vehicles, and even the slick Range Rover has some of this DNA. What makes the Range Rover impressive, apart from it being a premium built vehicle with the best finishes and cutting-edge technology, is the fact that it offers a blend of performance, comfort and some off-roading ability. You can customize it to your specific taste, especially in the top-spec SV Autobiography. In this variant, you’ll get a presidential experience as a back seat passenger, with seats that can do everything from reclining to massages. This is the vehicle you purchase if you want the finest an SUV can offer. Although with a starting price of R2 283 634, you’ll probably think twice before pitting your Range Rover up with rocks and bushveld.  You’ll get one in the used market from R1 200 000.

The latest and most affordable vehicle on this list is the Haval Jolion. Some people may be averse to this model because it comes from a Chinese brand, but Haval is the best-selling brand in China and has won multiple awards in its country of origin over the years. Introduced in 2020, the Haval Jolion has taken many by surprise because of its overall package. It’s an SUV with an alluring exterior design from front to rear. What caught many by surprise during its launch period in SA was its interior tech and overall design. It’s nothing short of premium, and can easily compete with more expensive SUVs at a fraction of the price. This isn’t the vehicle you purchase if you have any ambitions of going off the beaten path. The Haval Jolion is built for the city and that’s where it belongs with its 2WD system, yes you may be able to take on some gravel but that’s where it should end. What the Chinese got right here is the pricing, making the Haval Jolion a superb option if you’re looking to gain entry into the SUV space but on a budget. Starting price is R299 900, peaking at R398 900. Since it still is a new model, a pre-owned Haval Jolion will still be in the R200k/R300k region.