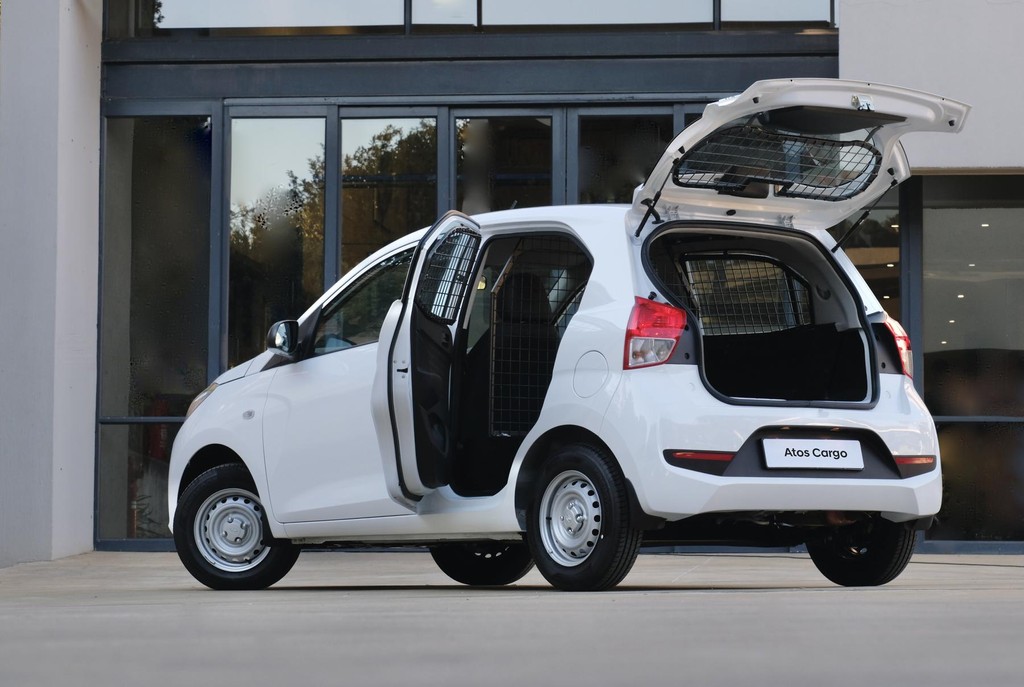 Spotting a gap in the market, Hyundai has moved quickly to occupy a niche space. The foot soldiers identified for this new undertaking are the existing Hyundai Grand i10 and Atos.

“We have identified the need for a small cargo transporter, particularly for delivery of smaller parcels and goods in a vehicle that keeps it secure in a robust cargo hold. The initial conversion of the Grand i10 into the Cargo derivative, with the secure hold area in place of the two rear seats, proved to be a winner,” said sales and operations director of Hyundai Automotive South Africa, Stanley Anderson.

These two compact members of the Hyundai range have been converted into transport vehicles and now form part of the brand’s new Cargo range. Put in simple terms, what Hyundai has done here is they’ve taken the standard Grand i10 and Atos variants and stripped them of their rear seats and everything else found behind the driver and passenger seats. The result is an open space with a perfectly flat floor that measures up to 1.2 cubic metres or 1200 litres. To make the space suited for its purpose, they’ve also installed a wire mesh to separate the cargo compartment from the front seats. The mesh has also been installed on the inside of the rear windows, making the two cargo models robust and ready to serve and deliver! With this kind of setting, you’ll also need hooks to anchor down your precious cargo. Well, Hyundai thought of this too and installed them. The rear quarters of the Hyundai Grand i10 Cargo and Atos Cargo may be built for utility but the front is just as comfortable and equipped as any passenger variant of these models. You’ll find convenience features such as a 7-inch screen with Apple CarPlay and Android Auto (Atos Cargo), steering wheel-mounted Bluetooth controls, electric windows and aircon. The Grand i10 Cargo has a smaller 6.2-inch touch screen but it’s also fully equipped for smartphone integration through Android and Apple smartphones.

Hyundai has made their new Cargo range available in three variants, two of these exist within the Atos range, namely an Atos 1.1 Motion Cargo and an Atos 1.1 Fluid Cargo. The third and final piece of the puzzle comes in the form of the Grand i10 1.0 Motion Cargo. All units will only be available in manual according to the brand.

“We homologated the Grand i10 Cargo as a light commercial vehicle, which created another benefit for businesses, because they can claim back VAT on their purchase. Following the success of the Grand i10, we also homologated the slightly smaller Atos 1.1 Cargo as the youngest entry to our light commercial vehicle range,”  Anderson explains. Interestingly, the Cargo vehicles are selling faster than we can write this article. So far, Hyundai has already sold 350 units of their initial Grand i10 Cargo model and an additional 50 of the new Grand i10 Cargo. 13 Atos Cargo units have reported for duty at their new homes.

When buying from a Korean brand in South Africa you know you’re getting peace of mind as part of the package. Hyundai’s new Cargo vehicles come with the brand’s class-leading 7 year/150 000km roadside assistance and a 1 year/15 000km service plan. Have a look at our Hyundai used car showroom for more great deals.

How much is the Hyundai Grand i10 and Atos Cargo?