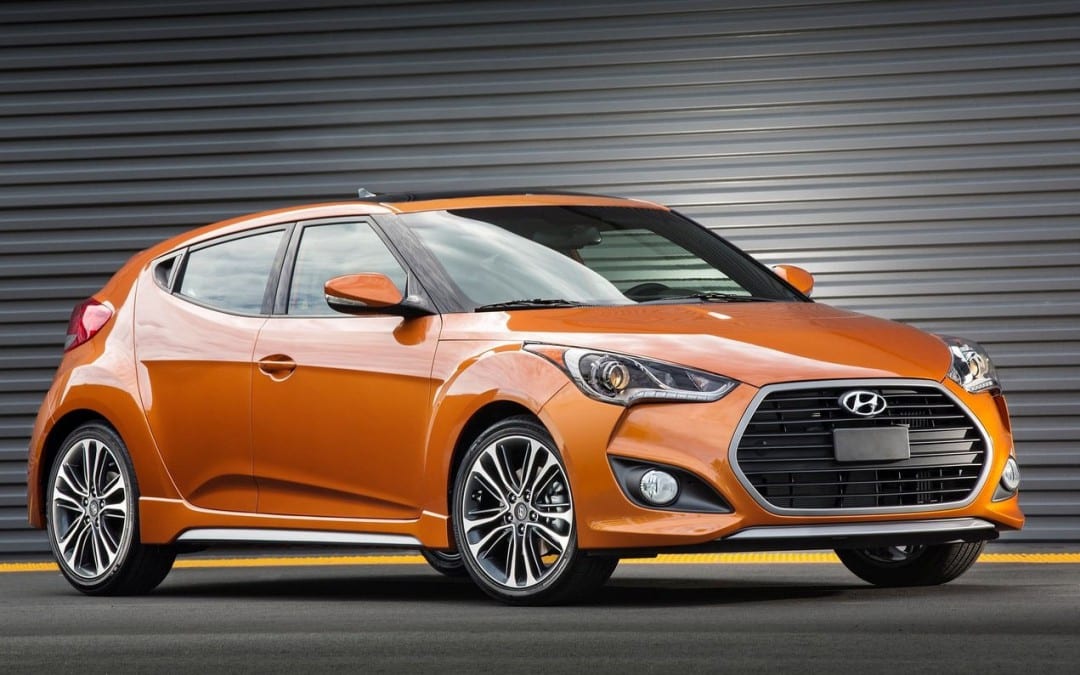 I can remember the first time I saw the Hyundai Veloster, I wasn’t a motor journalist at the time, but I recall how eye-striking the car was – futuristic and aggressive looking and I could not help think, “wow, this car must be really fast.” That’s until I spoke to the owner, who in a mild manner, said, “it’s all show and no go!” You see the Veloster is a marvellously designed vehicle, but with a normally-aspirated 1.6L four-cylinder engine only – it was just plain boring. 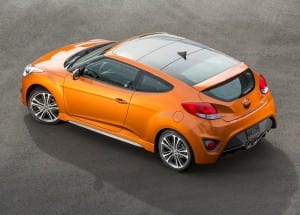 Four years on; is the new Veloster Turbo any better? Absolutely. Its Kammback coupe design has received a refresh. The inverted trapezoidal dual exhaust outlet, is now replaced with a bazooka looking double-barrel/triple-layered chromed exhaust tip, 18” alloy rims/low-profile tyres replace the 17” wheels, along with bigger brakes, (280mm<300mm), a larger hexagonal grill for better air-intake and a sporty bodykit that boosts it aero-aggressive looking stance. 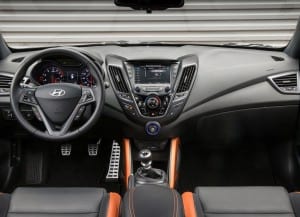 The Veloster moniker is a take on the words velocity and roadster, (A motorbike fuel-tank inspired the middle-console design). Along with Bluetooth, radio/frontloader CD player, USB ports, all multimedia functions are accessed via the 7” LCD touch screen and multifunction steering wheel. Other luxuries include a reverse-camera, heated and electric seats – and besides cupholders/utility areas – I personally did not find the Veloster’s interior practical. Great for a couple with a small baby, no friends and the headless horseman. The central cup-holders in the backseat are a pain in the ‘keister’ – the sacrum. But I will say in the driver’s seat, I was extremely comfortable – and on the highway the Veloster is a smooth operating and comfortable drive. 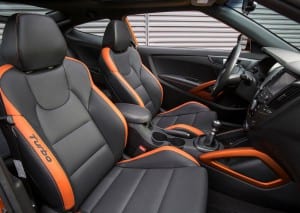 For a 1600cc turbo charged engine that ebbs out 150kw of power, transmitted via a sleek-shifting 6-speed manual gearbox that puts-down 265nm of torque – is impressive. The drivetrain on the new Veloster Turbo is brilliant, this is the same T-GDI engine shared with its sister rival – the Kia Cerato Koup. Besides similar design cues on the inside, the same drive train and similar handling, the Veloster uses the same chassis set-up as the Accent, but with a stiffer sports suspension, that prods you and makes the car skittish when on nearly imperfect tarmac. Switch the steering mode to Sport for a more direct feel and on any corner, despite its 1333kg mass the Veloster still delivers borderline ‘hot-hatch(y)’ fun. Off the line launch, the Veloster likes to skip and hop, as it wrestles for traction, but with minimal torque-steer, (delightful), the tyres find grip and a nice splurge of bottom-down torque firmly presses you into your chair. The car is expertly set-up to handle sudden braking, even in wet weather, and though the steering becomes a little vague – the Veloster springs all its safety mechanisms into action to ensure you stop as smoothly and safely as possible. The Veloster was created to fill the void left by the Tiburon, and attract a youthful audience. But at a price of R379 900, which could send the Veloster into an early retirement – there are better priced cars in the market, like the VW Scirocco 2.0TSi Highline, and the Kia Cerato Koup, 1.6L T-Gdi which now retails for under R300 000. However, once you have driven the Veloster Turbo, you will want one, stay away from the paddle-shift/DCT version though – manual is best!