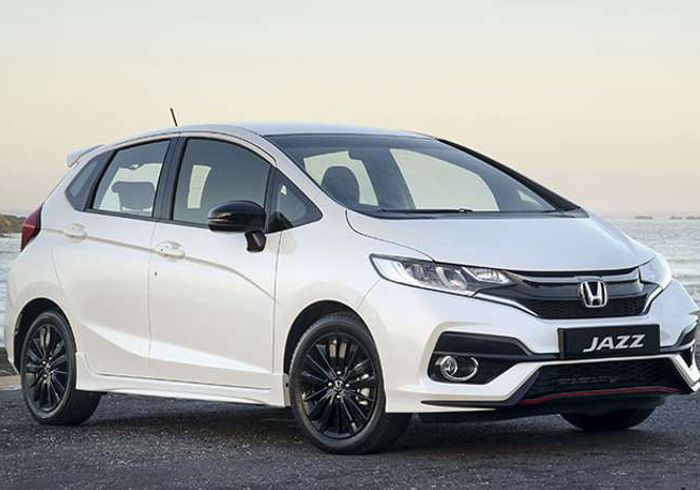 There is no doubt in my mind that the small car segment combined with the hot-hatchback category, is becoming more and more competitive as these vehicles grow in popularity. Honda kicked off the New Year with a fantastic bang; even more so as the Imperial Honda team hosted an incredible launch for the new Honda Jazz Sport and the Type R earlier this year where I got to mingle with excited fans and clients, as well as get to know the Imperial Honda team a little better. In such a great setting, I was able to learn more about the Honda Jazz Sport that is taking the South African market by storm.

Imperial Honda boasts a seasoned Dealer Principal: Simon Edwards has been with Honda for the past 13 years, and has a total of 18 years’ experience in the motoring industry. Believing that a fantastic team of loyal staff members make up the success of the Imperial Honda brand, Simon feels strongly that Honda offers unmatched quality and reliability, and as such, strives to manage the Dealership with honesty, integrity and fair dealings with each and every person who comes onto the showroom floor. With a deep love for the fast-paced and ever-evolving world of motoring, Simon worked his way up from being a salesman many years ago, and strives to grow both himself and his Dealership by following the philosophy of working hard to never drop the ball when it comes to clients. The pervading sense of care and respect is evident throughout the Dealership and is underscored in my next interview with Dean Du Croq.

Dean is the Sales Manager at Imperial Honda on the East Rand, and listed watching people grow as his passion. For the past ten years, Dean has enjoyed seeing his colleagues and clients alike growing and believes this Dealership is the perfect place to nurture this. With an abiding love for the team he works with, he has a background in hospitality that underscores his ability to put his client’s needs first which is very evident in his dealings with those around him. Having wanted to sell cars since his days as a school boy, Dean aspires to one day manage his own Dealership. He believes listening is the key to success, and he states that Honda did something right when they listened to the needs of the client, in creating the Honda Jazz. 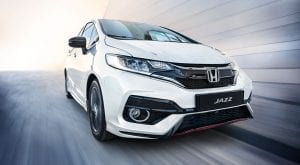 Alan la Grange is driven by a great love for motorcars and is the Sales Executive for Imperial Honda (with 12 years’ experience in the motoring industry and a history of racing motorcars in the past). With a candid laugh, Alan noted that he strives to give his clients the best information that is true and accurate, in order to maintain a good relationship with them. He notes he has become friends with many of his clients based on this honest and integrous philosophy, and that it is easy to sell a prestige brand such as Honda because he believes fully in the capabilities of the brand.

The original Jazz itself was a brilliant, underrated vehicle according to Alan. Loving his own Jazz for its versatility, he notes that he uses his to go camping and also ferry his family around. Launched in February this year,  the new Jazz sport has been very successful and has recorded great sales figures in the last few months. With a more powerful engine than before, and loaded with features, at the same price as the old Dynamique, the new Jazz Sport is an absolute steal, according to Alan. I am reminded of the amazing innovation and advancements that Honda are adding to the vehicle market: producing such high-quality vehicles (including the current line up at Imperial Honda in general) topped with the new Honda Jazz Sport and the Honda Civic Type R, there is no doubt in my mind that Honda is making it’s way up the ladder to meet other premium brands head on.

The all-new Honda Jazz Sport has been substantially refreshed and upgraded for 2018 – an obviously sportier, edgier look is the first thing one would notice as well as the updated cabin and cockpit. Taking it’s inspiration from the Type R, the Jazz Sport now boasts an aggressive and aerodynamic form with a bold spoiler and red trim-line. A prominent grille with slim, tapered headlights gives it an assertive presence that looks fantastic to me! 16-inch alloy wheels in a glossy black finish round the sporty new Jazz off perfectly. 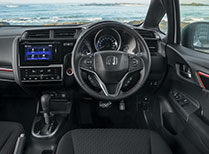 The interior is a pleasant surprise; much more premium than I would have initially pegged, everything around me is soft-touch, elegant and lovely to look at (there are also great chrome accents throughout which give a great sport vibe to the cabin). The cloth upholstery is standard (with leather optional) but is top-notch; stunning, sporty stitching makes this stand out as a great interior.

The steering wheel hosts full audio controls linked to a 7inch touch-screen managed infotainment system which is so easy to use and quick to get the hang of; incorporating Bluetooth, HDMI and iPod/USB connections and 6 speakers, the Honda Jazz also caters to all my musical needs. I love the little triangular windows near the front passenger and driver’s side which I feel contribute substantially to visibility and drawing attention to your blind spot. There is also a rear-view camera and electric windows all round, and nifty side-mirrors that retract after parking. Although Sat Nav is not included as standard, it can be added optionally. There are arm rests in the front and back of the vehicle, and two cup holders in the middle. Alan and I both love the handy cup holder on the dash for the driver near your right hand, which means you never have to take your eyes off the road.

Thanks to a compact engine bay, the cabin is spacious for a vehicle in this class, and thus has generous leg room and quite a nice-sized boot. The legendary “Magic Seats” still allow you to maximise space in the rear, making it possible to literally cater the space in the back and boot in numerous ways. I have heard that people fit unbelievably long items into the Jazz, including a treadmill and a quad bike, amongst other things, and (according to Alan, even a washing machine). As a pet-owner myself, I smile when Alan notes that he loves the way the seats fold down seamlessly and create a flat floor base, as this is ideal space for fur-babies to comfortably ride along with you. With the seats up, the boot capacity is noted at 359 litres, which enlarges to 889 litres with the seats folded down. 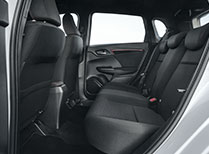 My opinion of the actual drive is that it is a fun, engaging vehicle to drive – a vehicle that really gets noticed wherever it goes. The heart of the new Jazz is the 1.5 iVtec 4-cylinder engine that kicks out a satisfying 97 KW of Power and 155 Nm torque; this really brings the Jazz on par with it’s competitors in this segment. Not only was the engine given a work-over, but the suspension system has also been upgraded and fine-tined, as well as a new braking system implemented that will surely not simply enhance the drive-feel, but also improve the already well-specced safety of the vehicle. One draw back is that it is currently only available in Automatic (which I personally like, but Alan notes would be a great alternative in Manual).

Despite having the sports-kit on the new Honda Jazz Sport, the ground clearance is still sufficient to not have to worry about speed bumps or low rises doing any damage. With fuel consumption as good as 5.6 litres to every 100 kilometres (noting that Wendy literally drives the vehicle in Sports mode for higher revs and stronger responses), the Honda Jazz seems to be a winning combination of well-performing machinery, practicality, and the wonderful reliability offered by the brand. With a starting price of R312 000, the Jazz Sport is a worthy investment.

Anticipating a dynamic year, Imperial Honda are selling the Type R’s and the Honda Jazz Sport at a rapid rate; having hoped to get a glimpse of the Type R, Wendy laughingly told me that she too hasn’t managed to test drive it either, as the Type R’s are being snatched up the moment they arrive at the Dealership. Excited for what the future hold for the brand and the dealership, I am hoping to bring you more information soon.