Actor/comedian Kevin Hart recently picked himself up a famous custom 1970 Plymouth ‘Cuda to celebrate turning 40 on July 6. The blue hardtop was built by Speedkore Performance Group and appeared in “The Fate of the Furious” with several of the company’s other creations. He nicknamed “Menace” and was first shown at the 2016 SEMA show, where it caught the eye of the film’s producers. Hart didn’t share what he paid for it, but some of Speedkore’s similar cars have been listed on the collector car market for well over $500,000.

Propelling this beast of a car is a Hellcat V-8 Hemi engine, which produces a staggering 720 horsepower that can send it from 0-60mph in seat-flattening 3.6 seconds. Talk about Power! And it is equipped with a “six piston extreme brake package” which can bring the Menace to heal pretty fast. 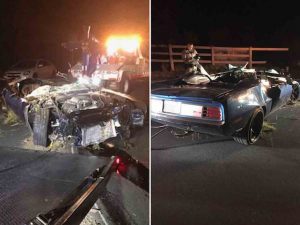 Last December, Hart purchased classic cars for his entire comedy team—eight cars total—after completing his Irresponsible Tour, a gesture he also shared on Instagram. Apparently, Hart decided it was time to get himself a new old ride too—something fast and furious, of course.

Hart was being driven in the “muscle car” shortly after midnight on Sunday along Mulholland Highway when the driver lost control of the car and it tumbled down an embankment. The actor and his driver Jared Black were left with back injuries. But while it is not known what caused the crash, it is fair to say the Menace is a formidable machine. Both Kevin and Jared were taken to hospital, while the female passenger was said to have not sustained any injuries.

Kevin Hart is able to walk again a week after his terrifying car smash — but is still in “excruciating pain,” according to reports. The 40-year-old actor reportedly fractured his spine in three places in the LA crash early last Sunday and faces weeks of extensive rehab.

But it’s not all good news for Kevin Hart. Sources with direct knowledge reportedly told TMZ, the driver, who sustained serious back and chest injuries has an attorney, as does the passenger in the backseat, who sustained only minor injuries. Kevin has a lawyer as well. According to reports, Kevin is in the crosshairs of the other 2 people in the 1970 Plymouth Barracuda because the car did not have safety harnesses or airbags. The argument is … Kevin should have worried less about keeping the car authentic and more about safety — and not doing so constitutes negligence.

Social media was flooded with well wishes and prayers. With the hashtags #KevinHart and #PrayForKevinHart trending since Sunday.