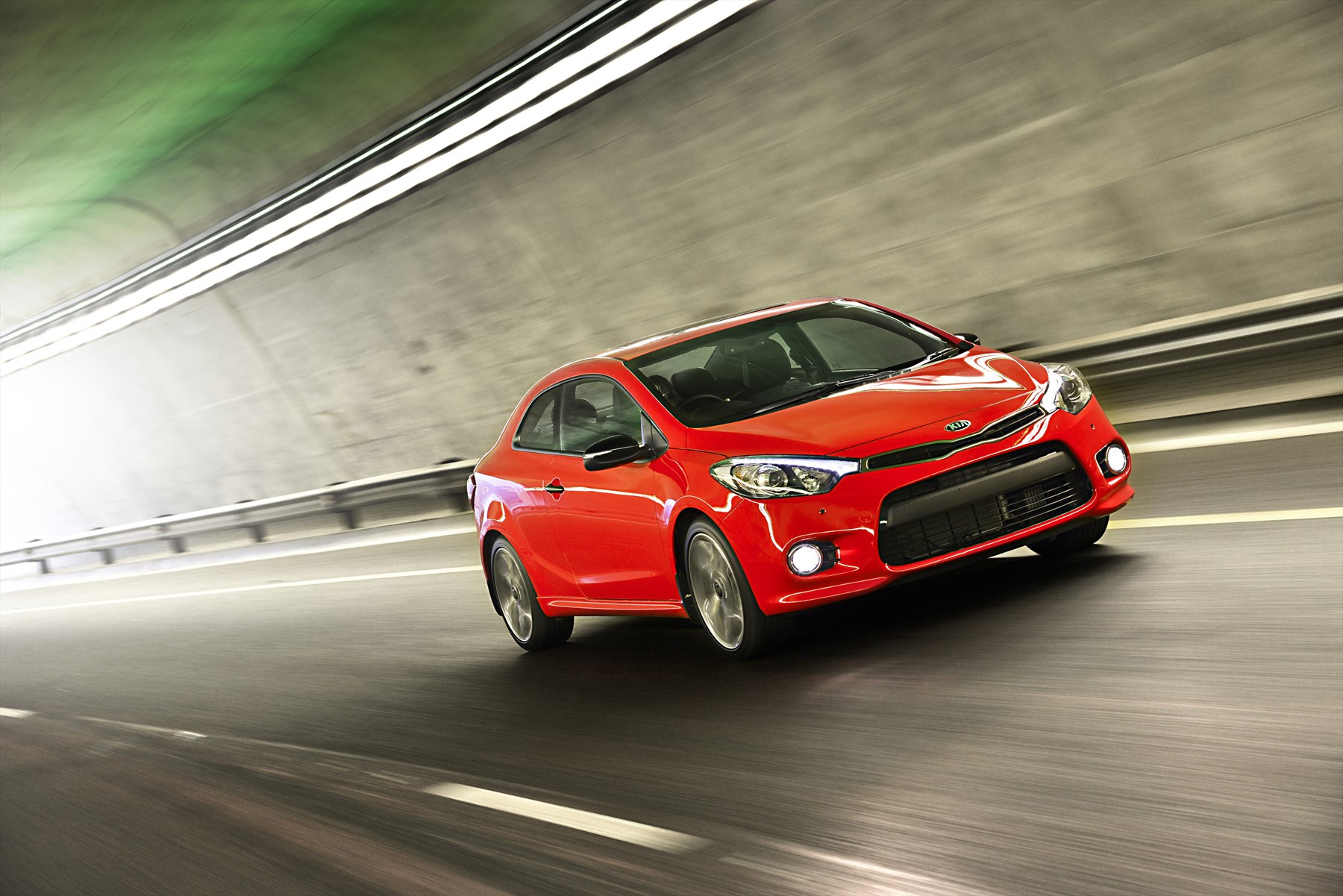 The new Kia Cerato Koup has landed; with high hopes and a price tag that reflects its serious intent to play with the big boys. So it needs to be nothing short of superb or risk damaging their reputation for crafting cars that are well-equipped, desirable but most importantly affordable. 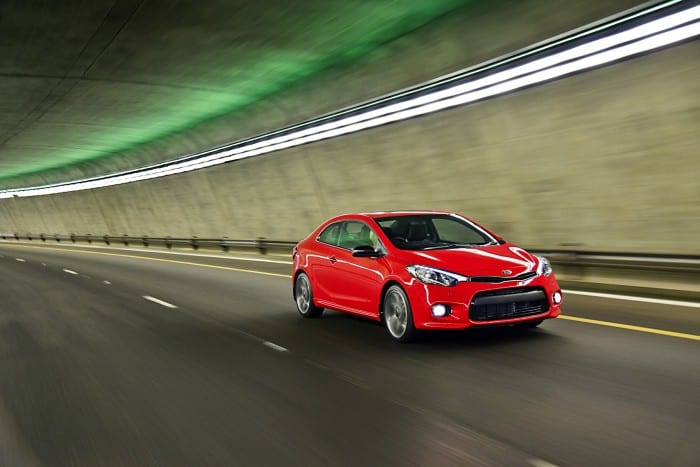 Nose of the tiger

In the styling department it’s all typical Kia. Striking embellishments, bold features and an assertiveness about its presence. Up front it has their distinctive “Tiger Nose” grille and intricate headlamps with LED lights that puts us in mind of a Transformer’s face.

The old Koup also made waves when it landed on the scene with its sleek, wedge-like shape. Straight lines have been ditched for a more sensual and curvaceous vibe. This is going to look at home outside Newscafe on a Friday night, as much as it will parked in the corporate lot. We’re also fans of the frameless doors. But not so partial to the integrated mudguards. The jury is still out on how well it will age though, in comparison to decidedly more conservative peers. 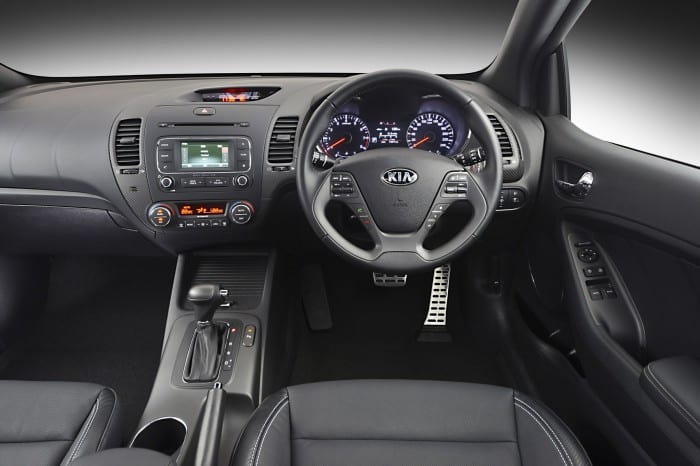 Overall the Koup’s cabin is inoffensive. The ventilated leather upholstery is classy and they opted for the mock carbon fibre pattern on the bolsters a la Volkswagen Golf R. Some coarse and hard areas are to be expected however.

In usual Kia fashion, the sportiest Cerato is laden with all the niceties you would want. There is a compact colour-screen interface which is quite easy to use. Cruise control, dual-zone climate control, a multi-function steering wheel and park-distance control. 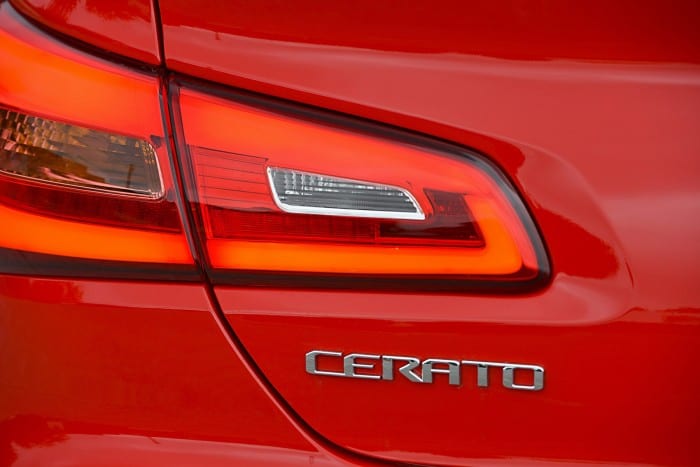 Be in no doubt that the Cerato Koup is quick. The turbocharged 1.6-litre engine is well-suited to the task of giving you an instant boost when required. With 152kW and 265Nm on tap it’s certainly no slouch. Flooring it on take-off induces some front-tyre scrabble and hints of torque-steer are noticed when you’re exuberant through the tighter corners out there.

The suspension is firm, geared towards spirited driving. And the gearbox is snappy. These virtues are unfortunately let down by the steering wheel; a gripe many have with cars from Kia. It’s vague, despite having their FlexSteer system which offers a trio of modes. One of them being Sport. A staffer at Surf4Cars who currently owns a Cerato Sedan and was thinking of upgrading to the Koup said he was deterred by this. If scalpel-like cornering sharpness is what you’re after, this will disappoint. 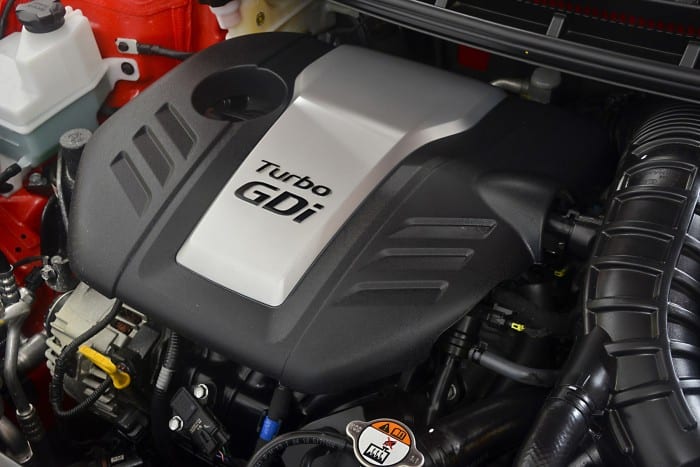 All about the badge

The Kia Cerato Koup starts at R334 995 for the six-speed manual derivative while the automatic model costs R346 995. In all, it’s a good car with ample punch and appealing looks. However, in badge-conscious South Africa some might not yet be ready to fork out that much for a Kia. Especially when models like the Volkswagen Scirocco could be had for similar money; even though the specification level might not be as generous.

Gripes: Vague steering, badge snobbery will count against it.