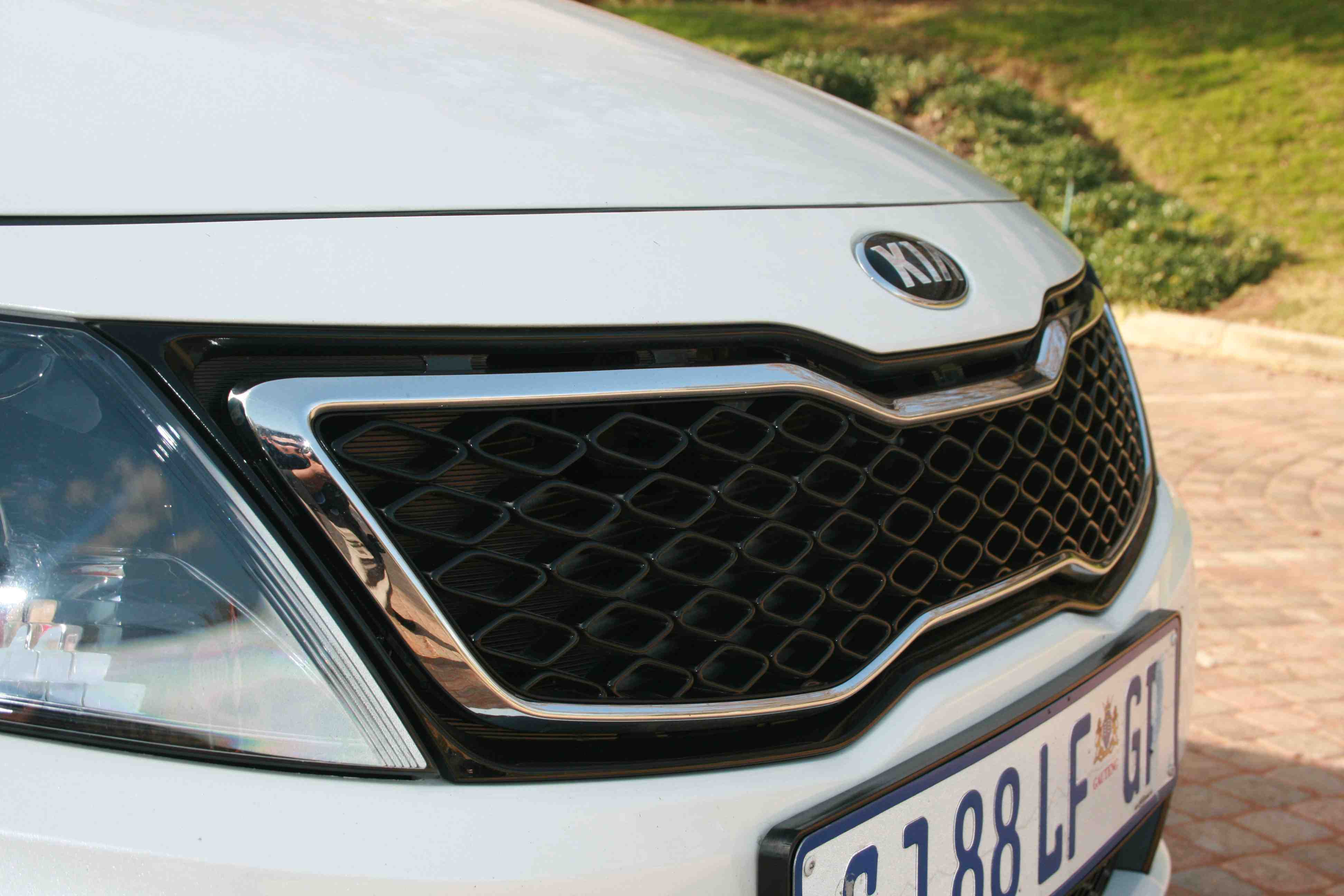 Three letters made all the difference. Enter the 2013 Kia Optima GDI: now with more grunt, appeasing outcries about its asthmatic output.

But don’t be mislead. GDI isn’t the Korean equivalent of that famous moniker which adorns the neat rumps of many a high-performance Volkswagen model. Rather, it signifies how the engineers managed to extract more from its 2.4-litre mill.

Gasoline Direct Injection. Now petrol is shot straight into the cylinders, the fuel injector is placed directly inside the combustion chamber. In the Optima, this translates into a 16kW and 19Nm increase. 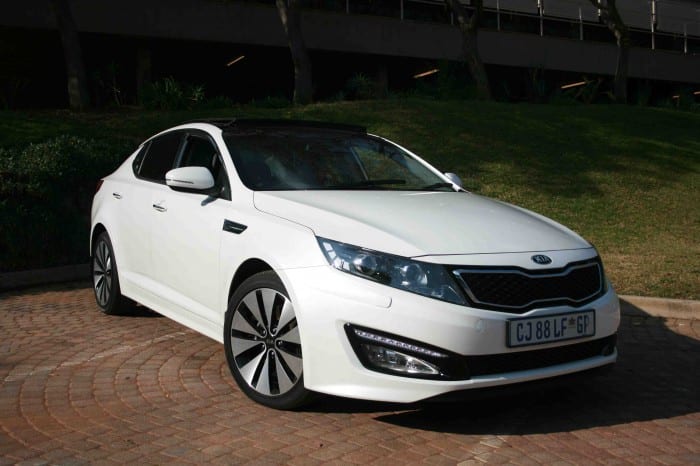 It won’t set your trousers alight, nor will you lift skirts with swift gusts of wind.

But gaining momentum is noticeably easier than it was with the old model; which we loathed for its lethargy and unwillingness to get up and and go.

Every iota of power counts at our altitudes, where there’s less oxygen and you find yourself being lighter on the Optima’s power pedal, in a bid to make progress.

There might be a manual setting on the transmission, with steering-mounted shift paddles as standard. But attempting to swap cogs on your own terms is met with frustrating resistance. We relinquished shifts to the gearbox over our test period. 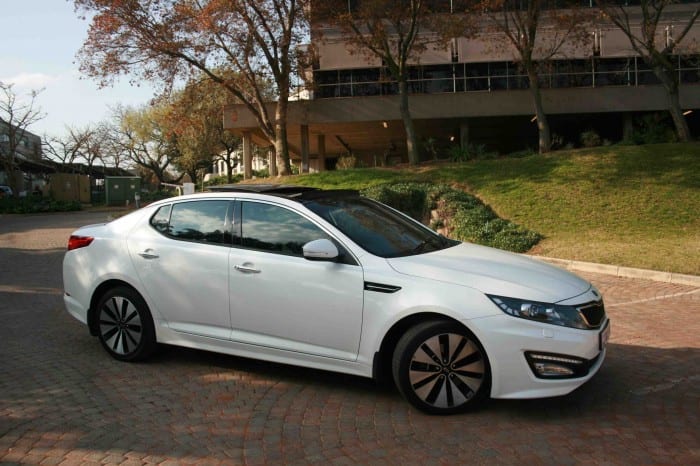 One aspect we think should be improved is the steering. Drive it back-to-back with an equivalent segment player and you’ll note the difference.

It’s an unnerving mishmash of things. At town speeds it’s fidgety, easily swayed by ripples and ridges in the road surface. We weren’t awfully confident tackling the backroads of Magaliesburg.

Turn abruptly into a corner and there’s a reluctance about the way the steering self-centres. Sometimes it tugged to either side mimicking a sense of torque-steer. We know the Optima has more power, but not that much.

If the Optima’s hope is to take on German rivals like the Audi A4, Mercedes-Benz C-Class and BMW 3-Series, it had better sharpen its act next time around. 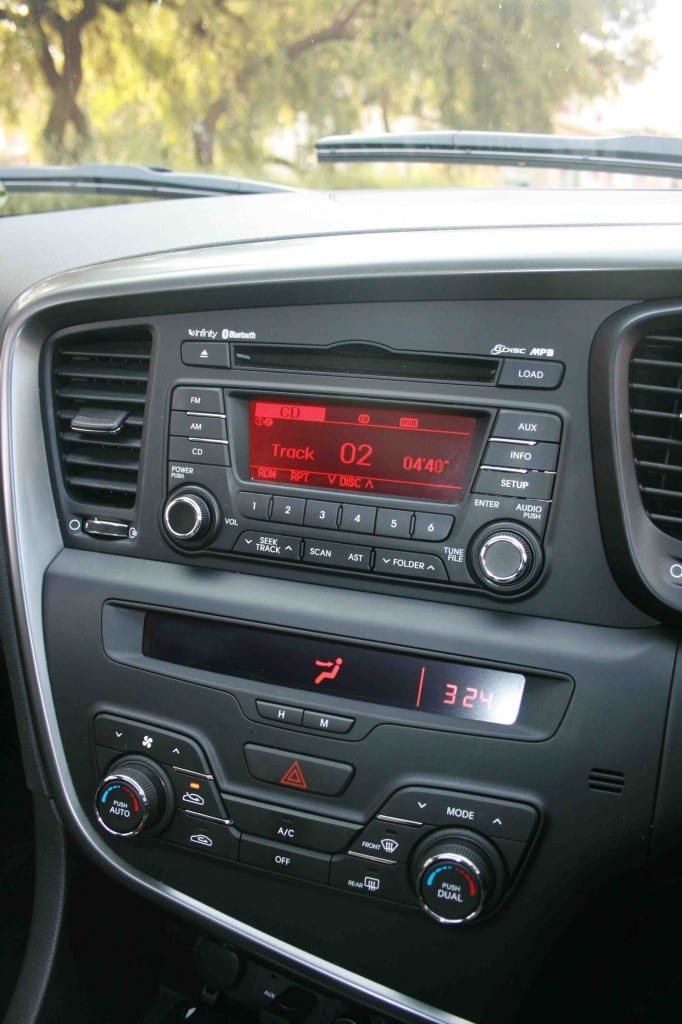 Redemption comes in the form of the Optima’s personality. One takes it seriously as an executive car – but it doesn’t take itself as seriously as its clinical counterparts.

This is why trendy, young types are flocking to it. Just look at South African house trio Mi Casa: each of them roll around in an Optima.

Kia has done a little more than tidy its act up when it comes to styling, in the last few years. They’ve managed to blend Eurocentric sophistication with Eastern quirkiness.

Imitation is the best form of flattery it’s said. And we thought the Optima resembled a sexier Saab 9-5 from some angles. Notably the rear side section, with those sharp “hockey stick” design rear windows and tall belt-line.

Whatever. The Optima has universal “wow” factor. Right from its tiger-nosed front, to its sleek side profile with its sharp-looking alloys. 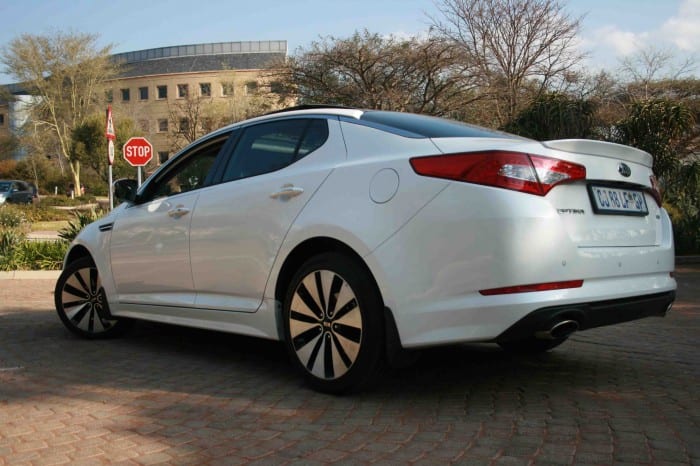 Buyers simply won’t find a better value proposition in this segment. If it’s tons of toys you seek, the Optima will deliver.

Many of the standard items on the Optima’s goodie list would have to be ticked separately, shopping around in the German section. And at R336 995, it makes a convincing argument. 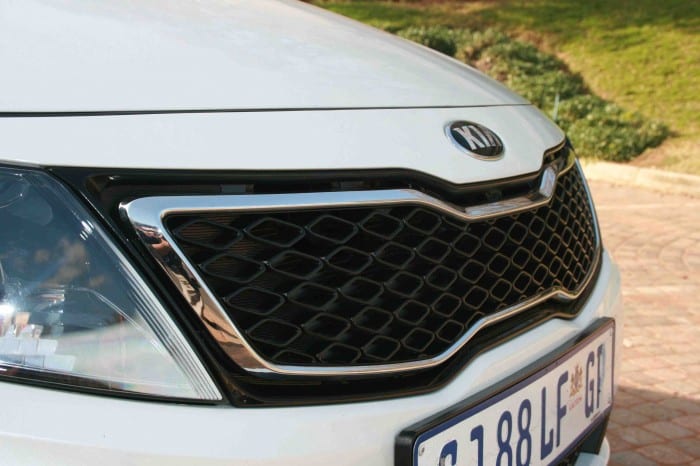 Can’t have your cake and eat it

Like Mick Jagger sang, you can’t always get what you want. But if you try sometimes you’ll get what you need.

And if what you need is a well-equipped, good-looking executive saloon for a reasonable price then the Kia Optima will do superbly.

If what you want is something with a truly rewarding drive and an emblem on the nose to pander to the badge snobs out there, you’re better off forking out more for a BMW 3-Series.