Lit Motors | Half Car Half Motorbike – The C1 Future Concept 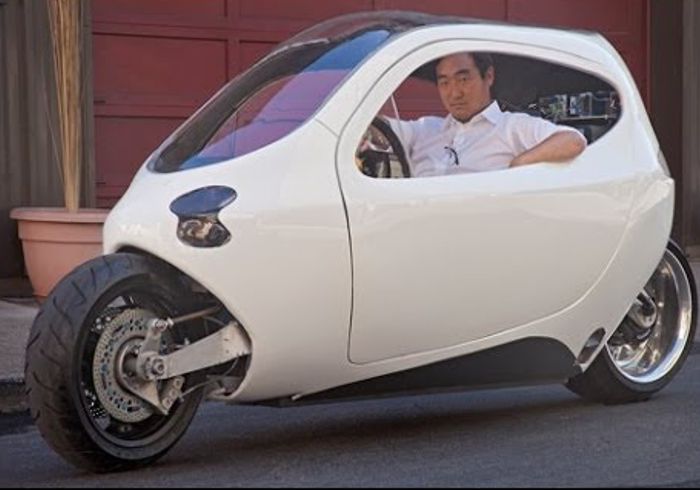 The new C1 (Concept One) is a fully enclosed, self-balancing electric motor-cycle: incorporating both the safety and comfort of a car but with the thrill seeking adventure of a motor bike. However, a bike can tip and a car can flip – neither of which will happen to the C1 – even in the event of a collision. 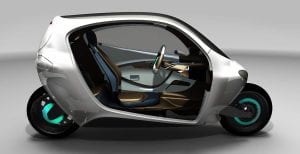 Here is why? Thanks to the C1’s patented gyroscopic stability system, called CMG, ensures the bike remains upright while on the move – as if balanced by some gravitational force…well…actually that is how it works? Using the earth’s gravity, a tandem pair of powerful spinning gyroscopes, generate what is known as precession, to produce 1700nm of torque force – this is known as the gyroscopic effect. As scientific and incredible as it sounds, it is the same phenomena acting on a spinning top: as long as it spins at a certain speed, it remains upright.  This simple but profound magic of physics transcends an unfathomed amount of stability in the C1. That even in the event of a side-on collision, though the bike may lean and skid, the immense upward and downward gravitational force exerted on the bike generated by the spinning gyroscopes – will quickly stabilize and pull the bike back to its upright position.  According to Daniel Kim, founder and President of Lit Motors and the inventor of the C1, you can lean the C1 close enough to the tarmac to touch it, without spilling over. A steer-by-wire system allows the C-1 to lean itself into and out of turns, like a regular motorcycle you can lane split,

safely maneuver between congested traffic and briskly cruise the open road. Even with a passenger, the media infotainment system playing and the air-conditioner on: fully charged, which takes four to six hours, the lithium iron phosphate batteries have a range of 320km. Also, it can do 0 – 100km/h in 6’s and reach a top speed of 160km/h. The C1’s onboard A.I technology includes sensors that record everything from road surface conditions, wind speed and traffic updates. While at the same time, it calibrates steering wheel, accelerator and brake pedal inputs from the driver – calculating the exact amount of front-wheel movement and precise lean-angle when negotiating a corner.

The C1 Future Concept has developed in leaps and bounds, though still in its prototype phase, Lit Motors believe manufacturing will begin by 2022.