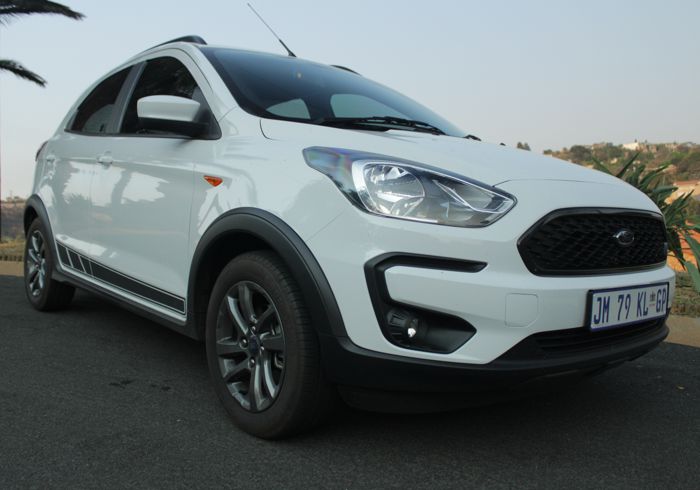 I was watching this documentary series called River Monsters. Where Jeremy Wade: extreme angler and biologist was fishing for a Goliath Tigerfish. When just as he lifted the alien-monstrosity out of the water – holding it up to the camera – I glanced over to the Ford Figo Freestyle parked in my driveway…when this rather bizarre association between the Tigerfish and the Freestyle entered my mind. Perhaps because the Goliath Tigerfish is the ultimate Piranha and the Figo Freestyle is the ultimate sub-compact crossover. Not the best analogy I will admit, for one the Freestyle is a charmer; sporty looking and, of course, it will not try to eat you.

The Figo Freestyle is a muscled-up version of the Figo – albeit they share the same chassis/platform and engine. Except the Freestyle has a 190mm raised ground-clearance as well as a tuned suspension for improved ride-comfort and sportier handling. Which strikes at the core of this car – that is impressive performance and livelier driver engagement. Thanks to an exemplary drivetrain that consists of a tenacious 91kw, 1.5l, i3 engine, imbued with T.i.V.C.T technology mated to a Getrag, 5-speed manual transmission – sending 150nm of torque to the front-wheels. From off-the-line to the red-line, the drivetrain delivers a linear crescendo of torque – reaching 140km/h in 3rd gear alone – augmented by both direct-steering and crisp throttle-response. Moreover, the Freestyle’s fuel-efficiency of 5.5l/100km is right-on the money or should we say saving you money! Suggesting that beneath its suburban façade there is an engineering marvel; that Ford has produced a halo-model that is exceptionally economical-to-run and explicitly fun-to-drive. Enjoyable handling, positioning the car exactly where you want it: from the entry, apex, to the exit of the corner. The Freestyle’s chassis/suspension responds with both vigour and compliance.  A slightly wider and longer body-frame does imply a bit more cabin space than the standard Figo. The interior is respectable, quality plastics, substantial cupholders and a nifty storage compartment atop the dashboard. My only irk was the driver’s seat does not have a height adjustable-lever which may pose a challenge for the more vertically gifted as well as the absence of steering-wheel mounted controls. Other than that, the cabin achieves class-leading comfort and fall-to-hand ergonomics. Notwithstanding, it has a pretty decent 4-speaker radio sound-system, Ford Smart-device Docking, along with AUX/USB and Bluetooth-hands-free cellphone connectivity. Standard safety features on the Trend include ABS/EBD, dual-airbags, rear-PDC, remote central-locking with drive-away door-lock functionality.

Inasmuch as I still cannot explain my cryptic analogy of the Tiger Fish and the Freestyle. I am however of the persuasion that the Ford Figo Freestyle is the sub-B CUV segment’s next apex predator.