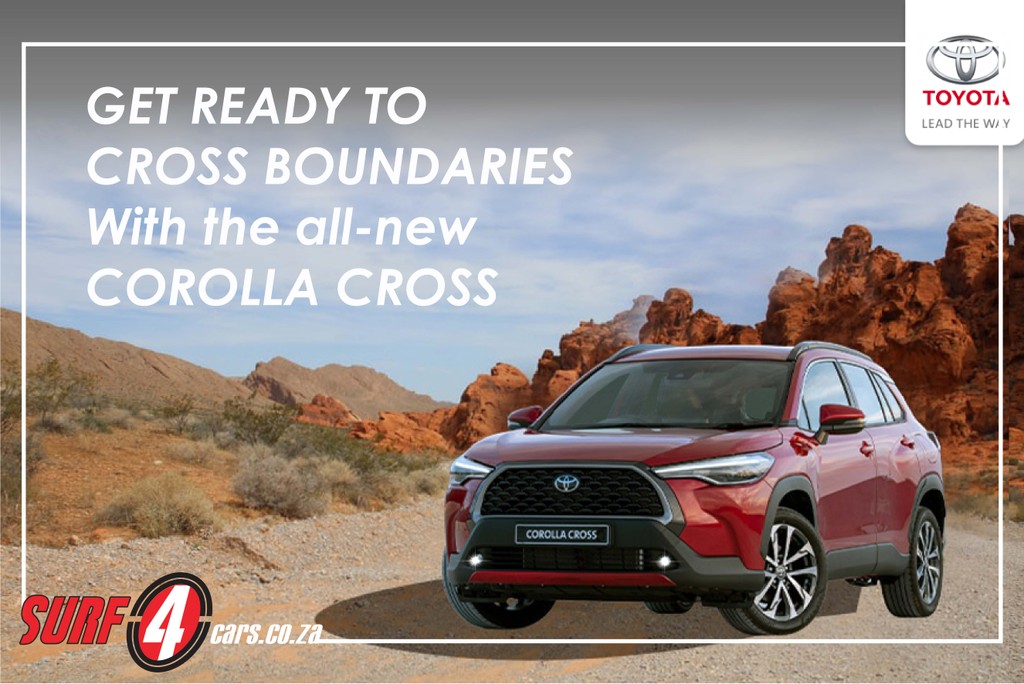 You don’t normally associate the Corolla nameplate with an SUV, but times change and Toyota has recently launched the Corolla Cross here in Mzansi, an SUV which has every intention of disrupting the segment.

The introduction of the new Toyota Corolla Cross in SA is arguably one of Toyota South Africa’s biggest exploits in 2021. You see, this model is an important one for the brand because it’s built right here in Mzansi at Toyota’s assembly plant in Durban. We will be the local and international exporters of the Toyota Corolla Cross.

What is the Corolla Cross?

Some have likened it to the Rav4, but that’s to be expected as the two are related and come from the same family. The Corolla Cross is Toyota’s latest SUV and an addition to the Corolla family. Yes, Corolla is now a brand and it includes the Corolla Quest, Hatch and sedan. At the top of the Corolla range is where the Corolla Cross sits. Now from a design perspective, it’s safe to say that the brand has done well with the Cross – front to back. It has an attractive front end with a pair of futuristic styled slim headlamps and a bold grille. At the rear things are very tidy and to the point, with narrow and elongated taillights that run sideways into the body of the vehicle. Corolla Cross badging is bold and clear on the centre of the boot, with the “Cross”  written in caps.

There are two variants of this SUV currently on offer; a petrol version (103 kW & 172 Nm) as well as a hybrid (90 kW & 142 + 163 Nm from the engine and electric motor). Both make use of the same 1.8-litre engine, however, the hybrid gets assistance from its electric motor. Now before the critics start doing what they do best, we must address the hybrid/electric power vs Eskom issue. Hybrid cars use a combination of internal combustion energy from the car’s engine and electric energy from its battery cell. Toyota’s move towards a sustainable energy source involves slowly introducing buyers to electric vehicles because this is where things are going across the board. Hybrid cars are the best way to bridge this gap because they don’t rely on Eskom or any other external power source to charge the battery pack. The Corolla Cross hybrid runs mainly on its internal combustion engine, and the electric motor kicks in at low speeds (good for traffic). With the hybrid system, the battery cell is charged when you’re coasting downhill or using the brakes, meaning you create your own electric energy as you drive and use it as required.

The benefits to this are significant fuel savings – according to Toyota you’ll make a saving of R1208 pm in the hybrid when comparing it to the standard petrol variant. This is based on an average monthly mileage of 2500km. You also save on brake pads, since the regenerative braking system slows the car down as soon as you come off the throttle, meaning you’ll be using less brakes.

Both variants are paired to a CVT gearbox, and there won’t be a manual coming anytime soon, if at all. What’s nice about this new Corolla Cross SUV is that it’s available with different styling kits for a unique look, both in the standard Corolla Cross and the Corolla Cross Hybrid. You get the X Over package, which gives the vehicle a more robust SUV appearance with blacked-out elements such as the wheels and grille. In Urban Sport and Adventure packages, the Corolla cross looks more like a clean city slicker. Other ad-on’s and accessories are also available if you want to go all-out. You have the option of front and rear Toyota dashcams, built into the vehicle, a wireless charging pad and more.

As we mentioned at the beginning of this article, Toyota has every intention of disrupting the B and C SUV segments with the Corolla Cross. It goes up against the likes of Renault Duster, Hyundai Creta, Kia Seltos and VW T-Cross. From a pricing perspective, we think Toyota South Africa has positioned this vehicle in the sweet spot, at a starting price of R350 000 and topping out at R448 300. With this, you’ll get a 6 services/90 000km service plan and a 3 year/100 000km warranty. The hybrid’s battery cell has an 8 year/195 000km warranty attached to it for your peace of mind.