In the beginning was the G-Class: the genesis of all Mercedes-Benz SUVs, and after the better part of four decades, still the patriarch of the family. For years, this off-road truck flew the military-spec, heavy-duty flag for Germany, and gained a cult following in the process. It became a serious statement of wealth and success, and rough-and-tumble types appreciated it as a hugely accomplished and virtually indestructible go-anywhere monster.

The G-Class eventually sired an entire range of vehicles (currently amounting to 6 model ranges, and due to expand to 7 within the next 12 months), even though the other SUVs share little but their name badges and some engines with the lumbering G-Class. But just because they’re different doesn’t mean that they’re any less accomplished in adverse conditions, as proven during a recent trip to Namibia to sample the latest crop of Mercedes SUV’s: the brand-new GLC-Class, the almost-new GLE and the lightly updated G-Class.

Mercedes-Benz GLC-Class
Striking into BMW X3 and Audi Q5 territory, the GLC finally allows Mercedes-Benz to compete in a burgeoning market segment – a segment which the other two Germans (and maybe the Volvo XC60) pretty much had to themselves in the absence of a suitable three-pointed starred competitor. We never received its international predecessor (the GLK) in South Africa, because that ungainly little box wasn’t engineered for right hand drive markets. 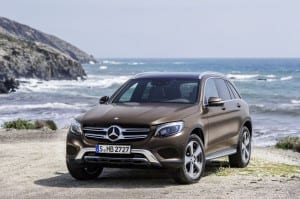 Fortunately, the new C-Class platform has been designed from the outset with all-wheel drive in mind, and for both left- and right hand drive applications. The GLC-Class draws from this platform, but adapts it to a new, higher-riding bodyshell, resulting in an attractively styled, practical and plush mid-sized SUV.

Imagine a shorter, taller C-Class Estate with extra ground clearance, and you’d have a good idea what the GLC looks like. It features a similarly protruding grille, along with the swoopy styling and horisontal tail light clusters of its sister car, in a package which manages to appear both purposeful and elegant – certainly one of the most convincing incarnations of the current Mercedes-Benz styling language.

Its civilised appearance don’t reflect its actual abilities though, for we were able to traverse some pretty nasty terrain during the launch drive. Sandy ravines and rocky inclines in the middle of nowhere aren’t really the natural habitat of such pseudo-off roaders, yet that’s exactly what we asked the GLC to tackle. It performed this task with surprising ease, especially when equipped with air suspension and off-road package. These options allow the GLC to lift its belly further off the ground and tailors the stability control system to let the GLC go where few soft roaders will ever venture.

Driving to Swakopmund afterwards, it took a gravel mountain pass and some high-speed cruising in equal stride, all the while delivering high levels of comfort and a sure-footed driving experience. The powertrains complement the GLC’s all-road competence, and feature permanent all wheel drive and a new 9-speed automatic gearbox across the range. There are four turbo-charged, four-cylinder engine derivatives, in petrol or diesel flavours. A high powered GLC 450 AMG Sport will eventually join the range, but there won’t be any full-blown GLC 63 AMG versions. Pity. 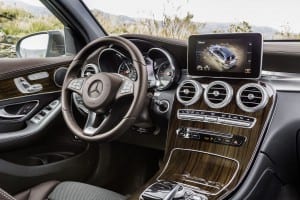 Again drawing from the C-Class parts bin, the GLC offers the same range of comfort- and driver assistance technologies. The cabin is lifted wholesale from its sibling, and features the same wide centre console with the multimedia screen perched on top in current Mercedes custom. Heated- and ventilated seats are available, as is a Burmester audio system. Driver aids include lane departure assistance systems, adaptive cruise control with automatic emergency braking, and an array of cameras and radar sensors to provide cross-traffic alert and self-parking facilities. 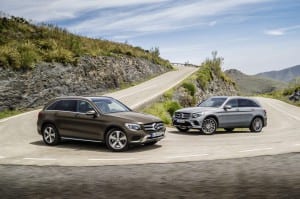 Many of these high-tech features are optional, though – so think carefully when ticking the boxes on your order form, because it can become really expensive really quickly. With base-variant pricing ranging between R599 900 and R654 900, the GLC is bound to appeal mainly to the affluent set, with the smaller GLA-Class filling in gap at the lower end of the price range. Pricey? Yes. But the GLC is also more than good enough to make a serious dent in the sales figures of its equally costly premium brand opponents.

Mercedes-Benz GLE-Class
The larger GLE-Class was unveiled at the same launch event. Just like the recently-released GLE Coupe, it’s built around the skeleton of the ML-Class, but its name change coincides with some fairly extensive mechanical changes. 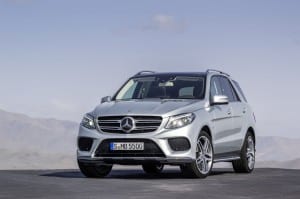 Entry-level duties are now in the hands of a new four-cylinder turbo-diesel variant, the GLE 250d, which delivers 150 kW and 500 Nm. Just like the V6 diesel GLE 350d (190 kW/600 Nm), it offers a new 9-speed automatic gearbox (presumably similar to the one in the GLC) and permanent all wheel drive. 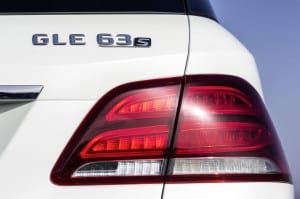 The cosmetic changes are a similar mix of old and new. The GLE’s rear end clearly shows its ML-Class ancestry (albeit with new tail lights and re-shaped bumpers), but its front end looks bang up to date with the current Mercedes styling language, with a protruding grille flanked by LED headlights. The cabin also received a mild freshening-up, with a new rotary controller knob for the (now free-standing) multimedia screen and revised switchgear. Once again, the GLE’s price tags aren’t for the faint of heart, ranging between R863 000 and R1 859 900 before options.

Mercedes-Benz G-Class
But if you really want to pay a premium for your Mercedes SUV, nothing can beat the G-Class. It still harks back to its days in the military, with a robust ladder-frame chassis and live axles both front and rear, but it gives a mere nod to its utilitarian roots, being both flashy in appearance and opulently trimmed. The latest model update brings LED lighting elements and a new control interface for the multimedia system. 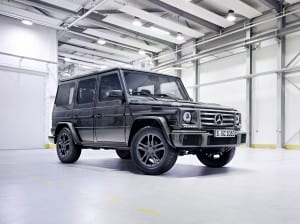 In its entry-level format (as much as a car with a price tag of R1 418 000 could be termed “entry level”), the G 350d is the more workmanlike of the two derivatives in the revised range. Its slightly smaller rims (18-inchers are standard) and higher-profile tyres means that it really is capable of conquering any terrain, especially in conjunction with its three locking differentials. The 3.0-litre diesel engine is now uprated from 155 kW to 180 kW, and torque jumps by 60 Nm to a new total of 600 Nm. 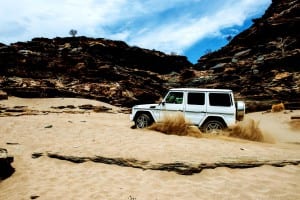 The big daddy Mercedes-AMG G 63 also receives a boost in power from its 5.5-litre twin-turbo V8 (up 20 kW to 420 kW), but the torque output is unchanged at 760 Nm. 21-inch wheels and re-programmed stability control tries to contain all this power, though there’s only so much that can be done with such an archaic design. No matter, for the G 63 is the ultimate one-finger salute to society: it loudly proclaims that its owner is very rich and not afraid to flaunt it. 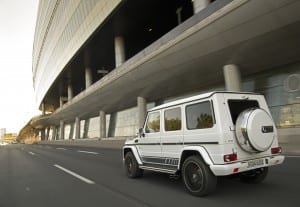 And in the quest for individuality among their peers, the extremely wealthy can add a special “Edition 463” option pack, which comprises stickers on the outside and carbon fibre trim pieces inside the cabin – all for a mere R152 000. 60% of G-Class buyers probably won’t mind paying that extra bit, though, for they already gladly shell out R2 156 000 for a “basic” G 63. Lewis Hamilton probably already drives one.