It’s been a long wait for Mercedes-Benz, but hope is finally on the horison: BMW has been selling up a storm with their X3 since 2003, and Audi’s Q5 isn’t far behind them. Meanwhile, local Mercedes dealers haven’t had any weapon against these premium mid-sized SUVs, for the old GLK was sold only in left hand drive markets due to various engineering constraints. This is rather unusual for Mercedes-Benz: they’re usually one of the first brands to exploit the tiniest niche market, let alone a high-volume one like this. 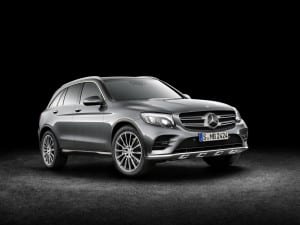 But it might have been worth the wait in the end, for the new GLC (in keeping with Benz’s newest naming convention) has just been revealed. In contrast to the outgoing GLK, which was a blocky, surprisingly utilitarian-looking thing, the new GLC shows off swoopy styling, with hints of the AMG GT sports car in its rear lights and a glasshouse that draws inspiration from the C- and S-Class sedans. It’s much sleeker than its slightly ungainly predecessor, and should finally pose a real headache to its German competitors. 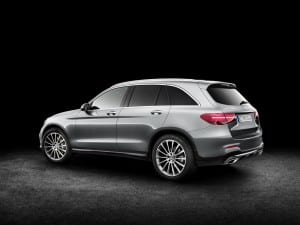 The most significant improvement isn’t in its styling, though: by using the new C-Class platform as a starting point, the engineers have finally devised a way to make the all wheel drive components compatible with right hand drive. This opens up a number of new RHD markets, including Japan, Britain, Australia and of course, South Africa.

As with the larger GLE-Class Benz (the SUV formerly known as the ML-Class, re-skinned in the current Mercedes styling idiom), entry-level vehicles will be offered with rear-wheel drive, putting paid to any off-roading ambitions but saving cost and fuel in the process. And just like with the GLE, there should be a coupé version along in due course to do battle with the BMW X4, as well as a high-performance AMG version. But until that monster arrives, mainline variants will be powered by an array of C-Class engines. 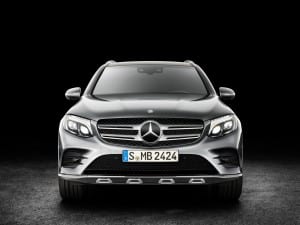 Expect the smallest (1.6-litre turbo) petrol to fall away, leaving entry-level duties to the 2.0-litre turbo petrol and 2.1-litre turbo diesels in various states of tune, with the possibility of a twin-turbo 3.0-litre V6 to fill the gap between the 4-pot volume sellers and the fire-breathing AMG version. As in the C-Class, the four-pot engines will cover the power spread between 125 kW and 150 kW, with varying torque levels according to fuel and electronic tuning.

Of course, the GLC wouldn’t be a new Mercedes without some innovations. First on the list is an all-new 9-speed automatic gearbox and all-new AWD system, to improve performance while reducing fuel consumption and exhaust emissions. Borrowing a little more from the C-Class, the GLC will also feature available air suspension for the first time in this class. This adds a twist to the tale by lowering the body at high speeds, reducing consumption and improving stability, and lifting the car for normal use. It probably won’t lift the GLC high enough to clamber over rocks and tree stumps though, but it’s unlikely that any GLC buyers will ever get up to such mischief in any case. 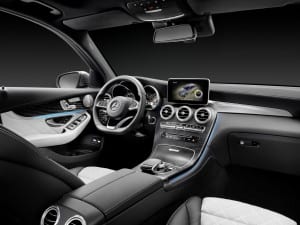 The cabin is laid out in similar style to the C-Class, with a wide, curved centre console, and a free-standing tablet-like display screen tacked onto the middle of the dashboard. And because the wheelbase has been stretched in comparison to its predecessor, the GLC should provide plenty of interior space and a capacious boot. Expect to find similarly clever electric-folding rear seats and an automatic tailgate, just like on the C-Class Estate.

Mercedes-Benz South Africa hasn’t confirmed a local release date for the GLC yet, nor do we have any indication of local pricing. We estimate that it will reach South African roads in the first quarter of 2016, and costing slightly more than comparable X3s. In the mean time, the excellent C-Class Estate will have to suffice for those who need more space than they’d get in a normal sedan.