Time has been kind to the current Toyota Hilux: it has, barring periodic facelifts, remained essentially unchanged for a decade, yet it’s managed to stay at the top of local sales charts for nine years. The fact that it’s remained competitive (and it still is, on-paper power- and performance disadvantages notwithstanding) for so long is testimony to the high standard of its engineering – it certainly raised the bar in its class when it was launched back in 2005. But even superstars eventually enter their twilight years, and that time has now come for the seventh-generation Hilux.

Fortunately, its successor has now been revealed to a worldwide audience. And while we’re only likely to see it on local soil at the beginning of 2016, it’s nice to know what’s in store for us. Sticking to an evolutionary approach, the latest Hilux is all-new in the sense that just about every component is changed, but its architecture is fundamentally similar to what went before. 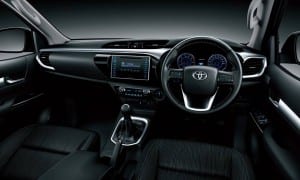 The new Hilux grows a bit in every dimension, resulting in a larger cabin and load bay. The chassis frame is stronger, which improves crash performance and, together with a new suspension system, increases the towing capacity by up to 1000 kg for a maximum of 3500 kg – on par with the (currently class leading) Ford Ranger.

Some major improvements happen under the bonnet. The top-line D-4D engine shrinks slightly to 2.8 litres, but its peak power goes up to a decent 130 kW, with torque peaking at 450 Nm when mated to an autobox, or 420 Nm with a manual transmission. Both gearboxes are new as well, and represent the new Hilux’s largest step into the twenty-first century: the old 4-speed autobox finally gets consigned to history, its place taken by a significantly more modern 6-speed unit. The same applies to the manual gearbox – at least as far as the range-toppers go. 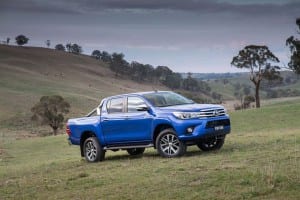 The cabin takes a similar turn for the better, with a modern design that’s dominated by a touch screen and some brightwork on the dashboard’s perimeter. The official photos show a dark-coloured interior with a car-like ambience – we can only hope that the more-modest workhorses get a similarly classy treatment. Safety features once again abound, with stability control and up to seven airbags on the spec sheet, but the new Hilux also marks the début of an autonomous braking system. 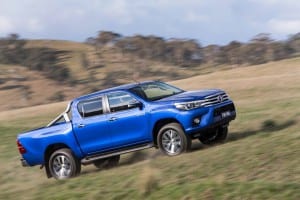 As for the styling…. well, we’ll probably get used to it eventually. The modern Toyota “family face” looks fairly slinky and svelte on something smaller (like a Corolla), but blown up to Hilux proportions, it’s very big and very shiny. At least it also looks very angry, frowning headlights and all, so it should be sufficiently intimidating in traffic. Non-leisure oriented variants (single cab workhorses, for example) are likely to once again receive slightly more subdued styling.

All the signs are there: the new Hilux seems set to continue the legacy of its predecessors. It’s designed and packaged around the same philosophy as always, only now it’s brought up to date with the modern era. All should be well around South Africa’s braai fires, then. 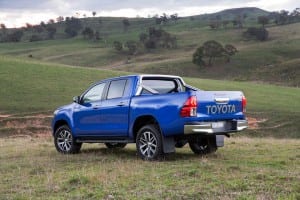