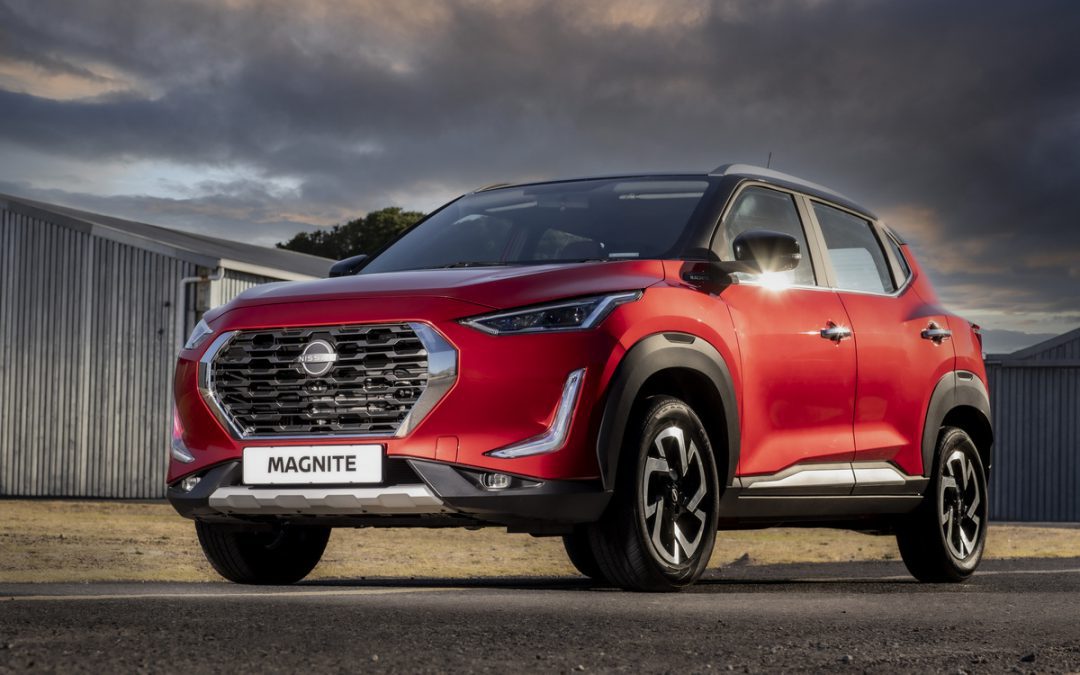 The eagerly anticipated Nissan Magnite has officially been introduced to the local motoring media, and we’ve had the opportunity to have an intimate look and feel of the new product. Thus far we’re yet to be disappointed – here’s what we know.

While the Magnite has been on sale at local dealerships since April 2021, its official launch only took place this month. It is a completely new product in our local car and SUV market and enters the ring against other new entrants like Kia’s latest arrival (Sonet), the Toyota Urban Cruiser and the Suzuki Vitara Brezza. This level of competition is great for you the end consumer, it means you’ve got options in this hotly contested segment.

We will concede and say that the Japanese have done a solid job with the Magnite’s design. Looks are a subjective thing and as the saying goes, beauty lies in the eyes of the beholder. Despite this, when these four vehicles stand beside one another in a beauty contest, the Nissan takes the gold medal.

Beauty may only be skin deep but Nissan has made sure that the Magnite has the brains to complement its looks. It has an impressive display of features for a vehicle in this segment, for instance, there’s what’s referred to as the Around View Monitor (AVM). This allows you to get a 360-degree view of the magnate from above, displayed through the 8-inch touch infotainment screen. It’s a useful tool for ensuring that your parking is on point. The same screen will display the now customary Apple CarPlay and Android Auto systems, and in this instance, they can be used wirelessly. From a safety perspective, Nissan has included  ABS, EBD, TC as well as Hill Start Assist. Dual front airbags are also on board to protect front occupants.

Let’s chat about the source of power for a moment. Beneath the bonnet is a 1.0-litre petrol engine, which is the only engine option currently available in this model. 74kW and 152Nm are the output figures stated by the manufacturer, and although they may not sound like much, they tell a different story on the road. It all translates to a surprisingly strong-legged and ready to go car. This isn’t the only thing to look forward to in the drive, the Magnite’s road handling will also surprise you. It feels solid and sure-footed with a weighted steering wheel to go with it.

As a whole package, the Nissan Magnite has done considerably well for itself in India, the country where it’s built. It has taken the award for TopGear India compact SUV of the year as well as a few other awards in this region. Only time will tell whether it will produce the same results here in Mzansi, but as things stand, the Magnite looks like good value for your Rands.