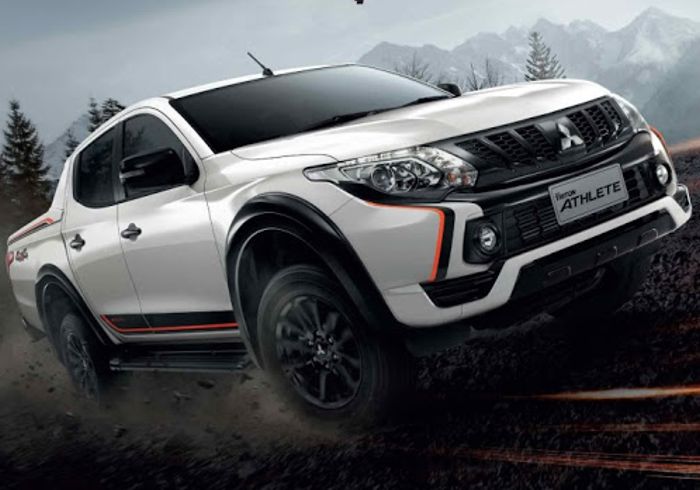 Whilst out of the country some time ago, I noted a curious fact. The typical bakkie that I am so used to seeing all over the South African roads is noticeably scarce elsewhere. Whilst there are certainly other types of “pick-up trucks” in places such as the US, the good old South African bakkie, or double-cab, is literally part and our culture as a nation and seems to be quite unique to us. Having checked out the Mitsubishi Triton recently, I was eager to preview the special edition Triton Athlete as part of my fascination with bakkie culture; my hosts for this are the dynamic team at Mitsubishi Menlyn.

A man who wears many hats, Pieter Voges, is both the Dealer Principal and Sales Manager for Mitsubishi Menlyn. Having spent the last twelve years in the motoring industry, Pieter devoted the last eight of these to the Mitsubishi brand. One of his core beliefs is that if you want to do something right the first-time round, you should put all your effort into it and this philosophy has filtered down to the team he works with. With great enthusiasm for the trajectory of the Mitsubishi brand, relating most especially to the way in which perceptions around it are changing, Pieter and his team are proud to represent Mitsubishi products and services to the Gauteng area. With a Dealership that feels like a family environment, expert guidance and solid relationships is what characterises their success.

Only one Sales Executive currently represents the brand at Mitsubishi Menlyn: Johan Robbertse. He is relatively new to the field and possesses a unique and engaging enthusiasm for what he does, which I deeply appreciate and is somewhat contagious. Johan expresses confidence in working for a brand that he feels is both advanced and as such, up-and-coming in the industry; he continues to tell me that he was won over by the nature of Mitsubishi products and services which are so unique and innovative to what else is readily available on the market. Since immersing himself in the brand, Johan acknowledges the reliability and motivated drive for improvement which the brand stands for, and as a result, leaves Johan feeling excited about his future in the industry where he can see himself one day also managing a Dealership locally.

Noting that the Triton as a start is an under-estimated vehicle due to its relative lack of exposure thus far, Johan adds that the special edition Triton Athlete has to be seen to be believed for what it is truly capable of. Although boasting the same engine and gearbox as the standard edition Triton, the Athlete is released with greater safety features, an overall refreshed look and many more on-board specs that are worth mentioning.

With the same Triton body, I note that the Athlete still possesses the edginess and strength inherent to the Triton, emphasised by its shark-like contours. This double cab is big and it exudes the solid capability of a work-horse bakkie; however, there is now an even edgier side to it in the form of the Athlete variant.

The Triton Athlete interior is part of what sets it apart. With an over-all reworked sporty look, the Athletes signature exterior vinyls are carried through into the interior, where the leather upholstery is stitched with high-quality orange thread and has orange highlights and inserts across the cabin. A touchscreen radio and integrated USB/Aux connections take care of your infotainment needs, whilst the reverse camera sets you at ease in terms of parking and manoeuvring the vehicle. Safety features have been substantially enhanced, and the Athlete now boasts 7 airbags as a means of prioritising passenger safety.

Released in only a 4×4 Automatic variant, the Triton Athlete has a 2.4 litre engine that is paired with a 5-speed automatic gearbox; in Johan’s opinion, this is a brilliant and reliable combination that achieves exactly what it was designed to do, and that is to provide direct, responsive power to the driver when it is needed most.  Kicking out a hearty 430 nM of torque, the Athlete is definitely a power-house; as a result, fuel consumption is rather heavy at 10 litres per 100 kilometres, although the 75-litre fuel tank means longer drives between filling up. Benefits of this super engine include an increased towing capacity of 3.1 tons.

With keyless entry and a host of premium features that include Dual Climate Control, touchscreen infotainment system and a multi-function steering wheel, the Triton is a bakkie with class and style. Ground clearance on the Athlete remains the same at 205mm, and with its 4×4 capabilities, I think the Triton would do really well in harsher conditions too. It is suitably equipped to do so, and – having the option to switch to 4×4 with a twist of a dial – can easily be thrown onto gravel and into ditches without a hitch.

The predominant thought in my mind when I drove the Triton was that Mitsubishi have done quite a few things right in their design: commending the manufacturer for their conscientious design and driver-centric lay-out, almost as though every aspect of designing the Triton was done from the perspective of the driver and passengers. I would assume that this has been maintained in the Athlete too. Priced at R559 995, this limited edition of the Triton is a worthwhile investment for the double-cab fanatic or the off-roader that would like to add a little edginess to his fleet.

Not only does this Dealership showcase the superb Mitsubishi products, but it also boasts a fantastic Workshop. Carel Landsberg, the Workshop and Service Manager at Mitsubishi Menlyn has been in the industry for 22 years and has a fiery passion for cars and the brand that he serves. Sharing with me that he started as an apprentice many years ago and moved up to the service sector, Carel was then upgraded to workshop advisor and ultimately into Management. Carel’s opinion on the Triton is that it is hands-down the best 4×4 locally available to the public at the moment. Working with a superbly knowledgeable team (under a Master Technician equipped with the latest training and knowledge) the workshop does extremely well to produce the highest quality work available.

Concluding my time at the Dealership, I note that Mitsubishi Menlyn also have supportive and aftersales departments that seek to ensure the clients they serve are kept happy; promoting their exceptional Parts department and Workshop, where the relevant teams work together to ensure the client’s needs are always met, I find the same high standards and work ethic in this environment too. With excitement about the future, the team at Mitsubishi Menlyn are also looking forward to the release of the Mitsubishi Eclipse later this year, which will be the brand’s contribution to the crossover segment.