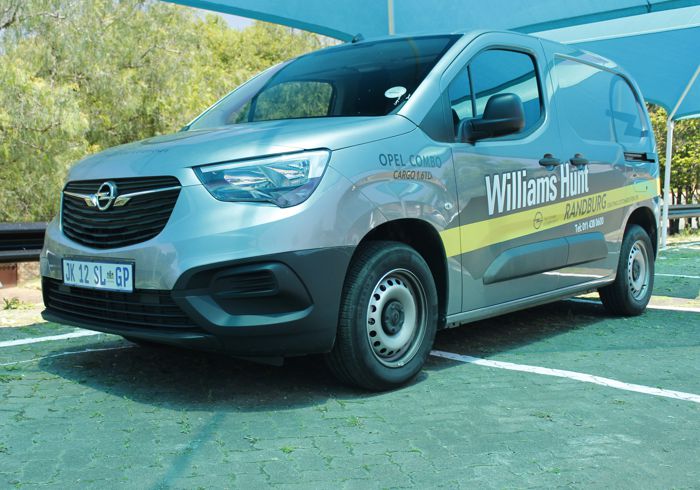 The new Opel Combo Cargo is the symbol of a light-duty commercial vehicle – not a furniture removal truck. But for the four days Williams Hunt Randburg loaned it to me – it had to be! Not only does the Combo Cargo tick all the right boxes – it also carries them.

In summary the Opel Combo Cargo boasts the versatility of a commercial panel van, the comfort of a SUV and the drivability of a Corsa. In comparison to other panel vans I have seen on the road that look like a warthog sitting atop an ice-cream cone – the Combo Cargo is rather good-looking.

The interior exceeds expectations with quality plastics, durable fabrics, comfortable seats, airconditioning, a user-friendly radio-infotainment system with Bluetooth hands-free cellphone connectivity and an impressive four-speaker sound system. Replete with a roof-mounted storage shelf, four cupholders, door-panel bins, a cubby-hole, driver-side utility compartment atop the dashboard, as well as additional space behind both the driver and passenger seat for small items. I spent hours behind the wheel of the Combo Cargo, in between transporting cabinets, chairs, and boxes of household items, naturally it also served as my daily commuter: grocery shopping, dropping my daughter at Girl Guides or collecting late-night take-aways. As determined as I was to complete our move, the Combo Cargo retorted with as much resilience and resolve to get the job done. Powered by a 68kw, 1.6 turbodiesel engine mated to a 5-speed manual gearbox, sending 230nm of torque to the front-wheels. The rear-doors unhinge and fold-outwardly to 90°

– providing both easy access to the 3.8m3 cargo capacity and a safer platform of which to dispatch cargo: during both loading and unloading. I am unable to confirm the exact weight of the cargo, but I estimate it was close to the Combo Cargo’s maximum capacity of 650kg. Likewise, I expected some torque-lag as well as an over-amount of body-roll and suspension bounce. Yet the powertrain remained hardworking and the suspension planted: somewhat unphased by the massive load it was carrying. Indicative otherwise by its fuel-consumption, for a short while, I maintained a fuel-consumption of 5.7l/100km, but upon my return, Monday afternoon, to Williams Hunt Randburg – my fuel score rested at 6.1l/100km. But the test of my patience was when I had to negotiate the narrow driveway of our new house – it would have been easier to do a U-turn inside a shoebox. Given the Combo Cargo’s short-wheel-base of 2785mm and overall length of 4403mm – how on earth was I to manoeuvre within a space no wider than eight metres? Well somewhere between the realms of physics and play dough, I concertinaed the Combo Cargo, the steering circumference is extremely light, allowing me to swiftly perform a 6-point turn like I was practicing for the Origami National Championship.

According to an overseas study conducted in the U.K – moving house is one of life’s most stressful events a person or family can endure. I totally agree with the results! Therefore it is with much appreciation that I thank Williams Hunt Randburg for allowing me to utilize the Combo Cargo – it was the one constant I could both rely and depend upon in what could only be described as the most turbulent and frustrating moments of our family’s life.

Why Bakkie It – When You Can Combo Cargo It!