It seems like Peugeot has finally run out of numbers. That’s the only reason why Peugeot’s competitor to the Volkswagen Golf still carries a 308 nametag, instead of being called the 309 (which was another small car back in the 1980’s). But apart from its name, the new 308 inherits absolutely nothing from the old one: it really is an all-new car. Built on a brand-new platform (which results in a substantial weight saving compared to its predecessor), the 308 also receives new engines and gearboxes, and thankfully also looks nothing like the previous generation.

Forget about the old car’s high roofline, gaping grille and startled-looking headlights, for the new 308 shares none of those styling features. Instead, we see a sleek, low-slung profile, toned-down grille and headlights that seem to frown instead of squint. It looks almost Germanic in the metal, with a notable absence of frivolous detailing, clean surfaces all round and a squat, four-square stance that promises secure handling and entertaining dynamics. That doesn’t mean that the new 308 is devoid of Peugeot-ness, though – the tail light clusters have an interesting claw-shaped design and the shrunken grille makes it appear aggressive and purposeful. RCZ apart, this is easily the best-looking Peugeot in a decade. It’s all changed for the better in the cabin as well, with some soft-touch materials and a simplified, elegant look. The main car controls are now operated from a new touch-screen interface, which cuts down on the old model’s multitude of buttons on the centre console and creates a classy interior ambience. And love it or hate it, but Peugeot’s new layout for the instrument cluster makes it into the 308 as well: just like the 208 and 2008, the instruments are moved closer to the windscreen (both higher than before and further away from the driver), which necessitates of a much smaller steering wheel. Peugeot reckons that this improves ergonomics because the dials are closer to the driver’s natural line of sight, and it does work well, but the layout does take some getting used to. Then again, the Peugeot 308 wouldn’t be a French car without at least some weirdness in its make-up, right?

The new platform is both lighter and more rigid than the old one, thanks to some aluminium bits and lots of clever engineering. It forms a good base for the re-designed suspension to do its work, which allows the new 308 to ride with a quiet, refined composure. Just because it’s quiet and refined doesn’t mean that it’s dull to drive either. Sure, the 308 is not a sporty hot hatch (at least not until we get a 308 GTi), but driving experience is surprisingly engaging. Even the non-sporting variants which launch the new 308 range in South Africa are good fun to drive, with plenty of road grip and predominantly neutral handling.

The changes continue under the bonnet, where you’ll find a new 1.2-litre, three-cylinder turbo-charged petrol engine in two states of tune. The lower-output version powers the entry-level 308 Active through a five-speed manual gearbox, and delivers a useable 81 kW and 205 Nm – significantly higher figures than the class-leading Golf 1.2 TSI can muster. It’s not an exceptionally smooth-running engine, but it has a wide power band and delivers surprisingly peppy performance: a 0-100 km/h sprint should take 11.1 seconds, on the way to a top speed of 188 km/h. 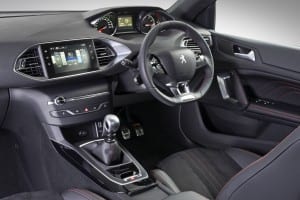 The up-market 308 GT Line is powered a different version of this 1.2-litre triple with 96 kW and 230 Nm, and this time it’s mated to a six-speed manual gearbox. It’s a bit more powerful than the Golf 1.4 TSI, and certainly seems like it would be able to hold its own against the German on the road as well, with a quoted 0-100 km/h time of 9.6 seconds and a top speed of 207 km/h. The important thing about such small engines is that they’re supposed to cut down on fuel consumption, and these ones certainly deliver (on paper): the Active is said to consume only 4.6 ℓ/100 km, with the GT Line slightly thirstier at 4.8 ℓ/100 km. As always, treat these figures as ideal-condition numbers, and expect closer to 6.0 ℓ/100 km out in the real world.

The old 308 was a stellar performer in safety testing, and the new car continues that tradition. Like its predecessor, the new 308 has a 5-star Euro-NCAP safety rating, augmented by stability control and four airbags in the 308 Active (six in the GT Line). Equipment levels are fairly comprehensive, with even the Active receiving air conditioning, cruise control, and a six-speaker sound system with USB- and Bluetooth compatibility on top of the usual luxuries such as electric windows, air conditioning and power steering. It certainly appears to be good value for its R 275 900 price tag.

The GT Line ups the ante with electrically operated front seats (with a massage action), leather-and-Alcantara upholstery, dual-zone climate control, parking sensors, and automatic operation for the headlights and wipers. A service plan for five years or 60 000 kilometres on both Active and GT Line variants should contain the 308’s running costs, while there’s peace of mind to be found in the warranty which runs for three years or 100 000 kilometres.

Improved in every way, the new Peugeot 308 poses a serious challenge to the establishment. It goes straight for the Golf’s jugular in the refinement stakes, and offers Ford Focus-like value for money. Quietly classy, the 308 is finally a convincing contender in an extremely competitive marketplace. 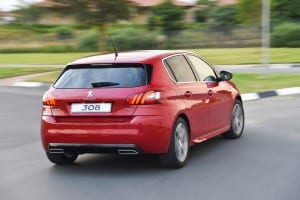