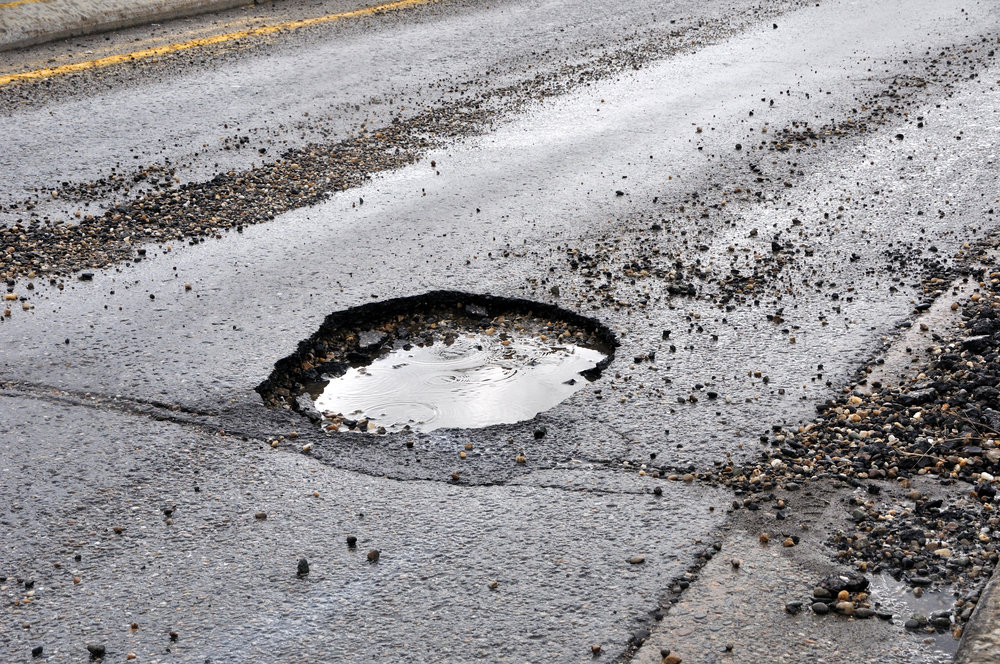 For most South African motorists – who among us care about how a pothole is formed? None of us really. Our only response is we want them repaired as quickly as possible followed by regular road maintenance: a straight-forward and practical solution. But a little bit of knowledge does go a long way.

South Africa’s roads are a serious point of contention, insufficient routine preventative maintenance is mostly to blame but then so is our extreme climate and the rapidly increasing number of heavy vehicles. Potholes are most prevalent during the summer rainy season: scorching road surface temperatures cause the tarmac to become brittle forming fissures across the surface – identifiable by a phenomenon called ‘crocodile cracking.’ Vibration from travelling vehicles and sub-terrain ground-movement – cause the cracks to widen. Then the first heavy-rain arrives, water seeps into the cracks, eroding the supporting sub-surface material, causing a hollow depression to form, the surface then fatigues and eventually collapses – even under the lightest pressure or tyre-load. Potholes can literally form overnight, particularly after a torrential downpour – after just two or three days of constant rain – a pot-hole the size of a putting-hole can rapidly erode into a tyre-killer orifice the size of a bear-trap. Speaking of which, dodging potholes can be compared to a drunken Horse Fly navigating a field of Venus Fly Traps – narrowly escapes being eaten. The sad reality is that South African roads will always be riddled with potholes – unlike pubescent acne that eventually disappears over-time, pot-holes are more like herpes – they ‘come-and-go’ – and there is no cure. South Africa boasts the largest transport infrastructure and road-network in Africa – 747 000km to be exact. Therefore, how does South Africa’s “pothole pandemic” size-up or compare to the rest of the world? “Are the roads on the other side less Hollier?” In the United Kingdom approximately two-million potholes are filled every year. According to an annual AIA survey – it would take fourteen years to clear the backlog and £11.1Billion to restore the roads to a reasonable condition. In the U.K, pothole season is most prominent during their ice-cold winter season – water ingresses the cracked road-surface, becomes trapped within the substrate and freezes. As a result, the frozen water amasses into thin layers of ice, pushing-up against the above road surface and inevitably causes it to fracture – often left unattended for weeks-on-end potholes have been reported to exceed the size of a hot-tub. Therefore, one could muse that in South Africa our pot-holes implode while those in the U.K explode. Among countries with sub-zero temperatures, like in Canada, the freeze-thaw cycle wreaks havoc for Canadian motorways – of which road-users claim is out-of-control. Toronto for example, the capital city of Ontario, a quarter of the size of Johannesburg, and Canada’s most populous metropolis – fills an average of two-hundred and fifty thousand potholes per year. Along with a team of twenty-five crewmen deployed everyday, potholes must be filled after four days of being reported. Yet despite Canada’s high-level reporting system and cutting-edge machinery many cities still sit with a backlog: presumedly because road-construction crewmen employ temporary methods of repair during the winter months, as -18.6 degrees Celsius temperatures make it near impossible to permanently fix a pothole – more permanent solutions can only be applied during Canada’s much warmer summer period. The panorama is very similar in the United States. The U.S boasts 6.28million kilometres of roads and highways combined however more than fifty-two percent are in a miserable condition – despite the $28billion spent each year on maintenance. In New York alone, over three-hundred potholes are filled every year. At which rate, America might become the next superpower of potholes but not before India.

Globally, potholes are an absolute aggravation for both road-users and maintenance crews. In search of that magical formula to rid the planet of potholes, almost every country seems trapped in the proverbial cycle of short-term problem solving but without any long-term solutions. In Johannesburg, J.R.A launched a mobile App in 2014 called Find&Fix – a first of its kind in the southern hemisphere. The app was developed to help improve J.R.A’s reachability and customer service to deal with an avalanche of complaints regarding poor service delivery. Not long after its launch, the Find&Fix application achieved three accolades in the Microsoft Partner Network Awards, and enables users to report any service delivery complaints with ease and rapid efficiency. Case in point, to report a pothole, you would open the app on your mobile device, take a photo, provide a brief description, which is quickly uploaded along with a precise geo-location which the app captures automatically.