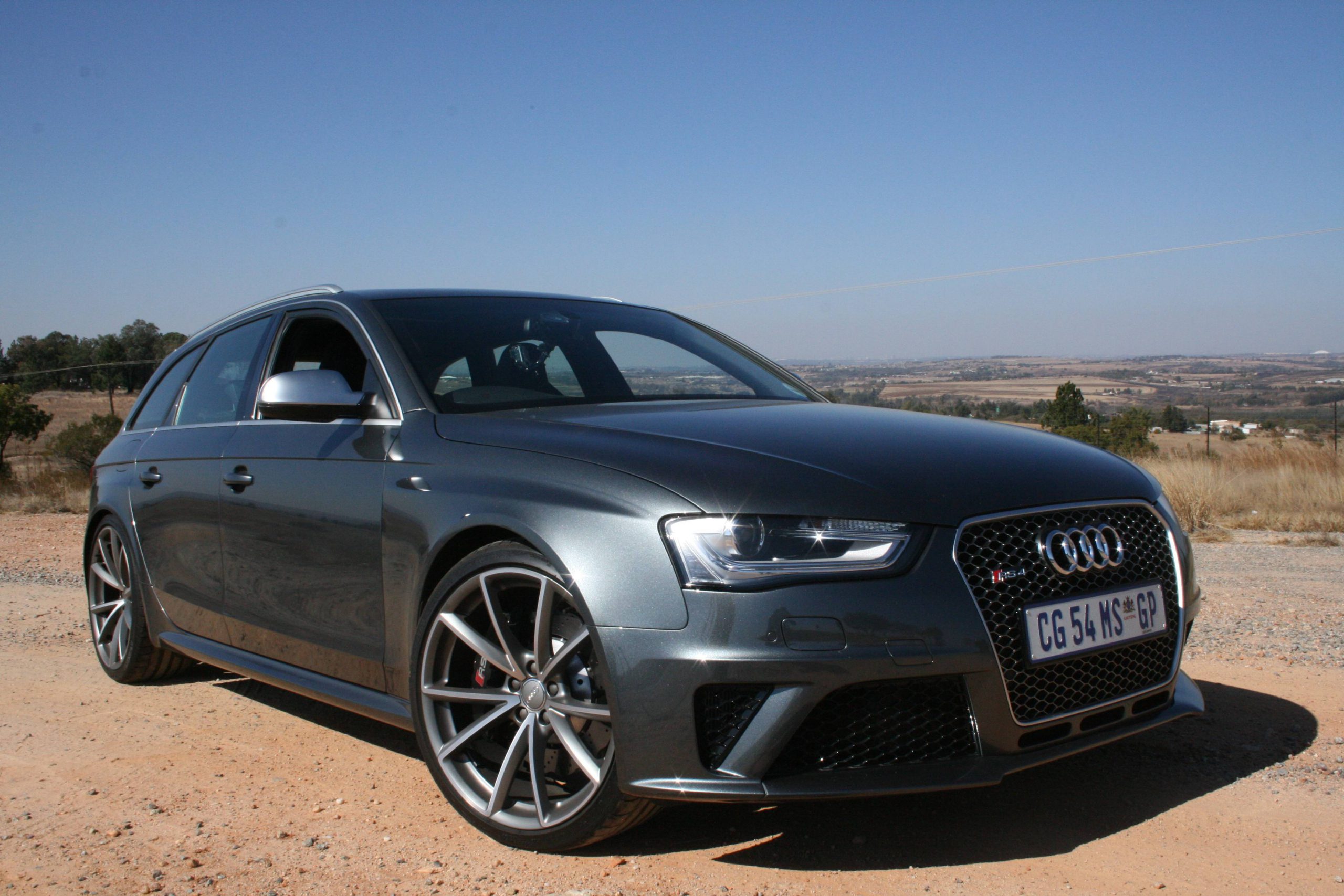 They look like us. They talk like we do. Sociopaths blend in, disguising their malevolent intentions for the people whose paths they cross.

The Audi RS4 Avant is a sociopath. And it has the audacity to pose under the guise of an unassuming station wagon.

Just ignore the family-friendly facade of versatility and pram-swallowing practicality. This German is a sinister assassin. It is a track-focussed beast out to wreak havoc, masquerading as a road car. 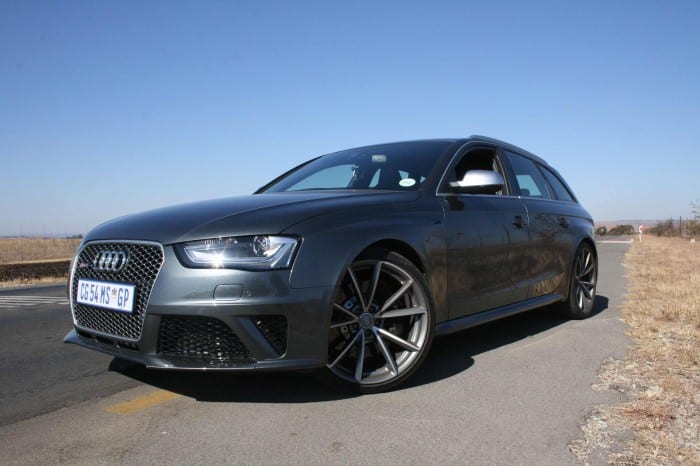 In standard guise the Audi A4 Avant garners our praise for its style. The RS fixtures give it a slightly meaner presence. But it is still charming, sophisticated and would not look out of place at the golfing estate.

Wearing the Daytona Grey shade, it is unassuming. People will have to look twice to notice that you are behind the wheel of much more than the average wagon.

Bulging wheel-arches with square overtures are reminiscent of the original Audi Quattro model from the 1980s. Traits like the rear diffuser and bold honeycomb grille are butch and distinctive.

This is more subtle than rivals like the Mercedes-Benz C63 AMG and BMW M3. Initially, sentiments were underwhelmed by the restrained exterior. But we suppose its reserved nature is part of the overall “wolf in wagon’s clothing” character. The specification sheet is something to get giddy over. How does a 0-100km/h time of 4.7 seconds sound? Keep in mind that it still has four doors, comfortable seating for five and a five-year/100 000-kilometre maintenance plan.

Then you press the right pedal down and all the pragmatic stuff falls away. It is angry, deranged and animalistic.

Its ferocious acceleration gets all those Caveman points pinging like a pinball machine. The thrill of its surge is addictive – you are likely to establish a sound relationship with your local Metro policeman. The metallic V8 roar is best savoured with the windows partially open.

In the same way it is versatile, it also shows an ability to adapt to all driving moods. The big 4.2-litre lump is barely audible while pottering around town. A transmission with seven cogs does its business with the smoothness of a red velvet cake. And because of the thick insulation, exterior sounds do not impregnate the cabin. You can call it serene.

Rest assured the Drive Select button on the fascia is more than a gimmick. Set it to Dynamic mode and the engine tone immediately becomes more gruff. The change is palpable. It becomes sharper and more raucous. This is like a wild feline raring for the kill. 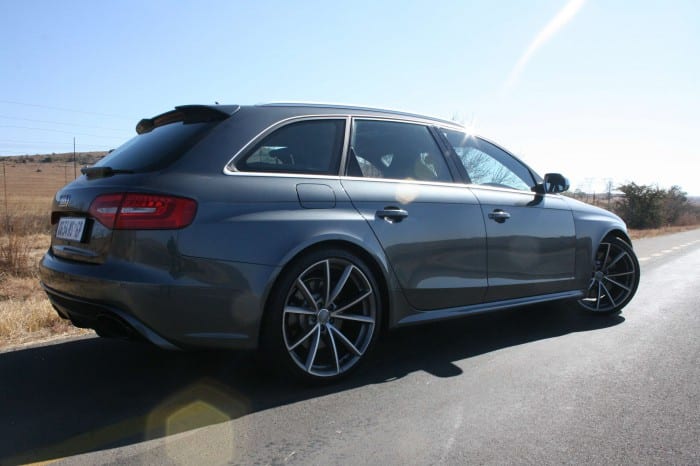 Lurking Around The Corner

Everybody needs a bosom for a pillow, went the song by one-hit-wonder, Cornershop.

In the Audi you have the assuring bosom of a sticky all-wheel drive system. Quattro makes driving this malevolent and manic estate car much easier. The car makes you feel as invincible as Jason Statham in The Transporter.

We exploited it on the countryside roads of our province, never getting the uneasy sense that the 311kW beneath were conspiring to write the ending of our road test in a ditch.

But when it comes to cars of this nature, it’s different strokes for different folks. Some buyers will love the assuring clinginess of the RS4, while others might yearn for the thrilling tail-happiness of rivals like the AMG-fettled Mercedes-Benz. 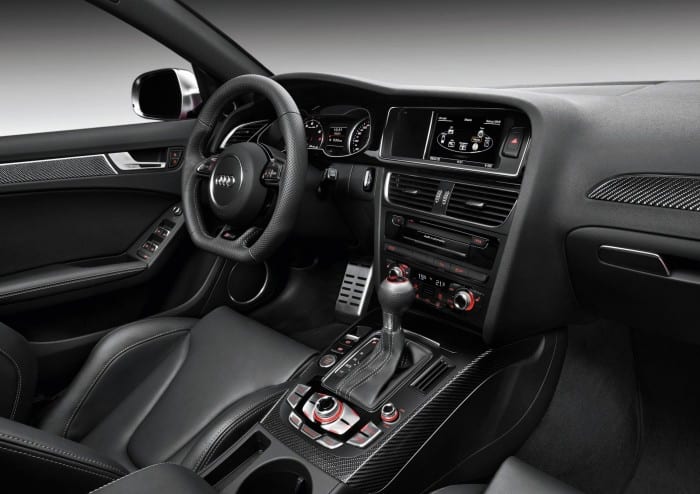 Belly Of The Beast

Just like the exterior, the inside story of this Audi is one of subtlety and discreetness.

Apart from a few RS badges, sculpted sport front seats and a steering wheel with a square bottom edge, it looks just like your uncle’s 2.0TDI.

Although Audi released the A4 in 2008, with no significant interior changes to date, it still manages to look contemporary. We like the intuitive nature of the Multi Media Interface system, with its driver-friendly placement of buttons.

When you slot the Drive Select system into Comfort mode, it fares well as a docile cruiser and would easily lap up the kilometres while keeping passengers happy and calm.

Rarely do stories involving the exploits of a sociopath end on a happy note. This is no different.

To give this sinister wagon a home, you will need to fork out R875 000. The model featured here had an as-tested price of R950 000, after being fitted with a set of 19-inch aluminium wheels, a panoramic sunroof, a sports differential and Bluetooth mobile phone preparation.

Given that estate cars are already unloved on the South African market, we do not foresee many buyers making queues to sign the dotted line.

The perception is that better value would be had with something like an Audi Q7, Mercedes-Benz GL-Class or even the Porsche Cayenne.

But if you have a healthy bank balance, this mental Audi RS4 is something special indeed.