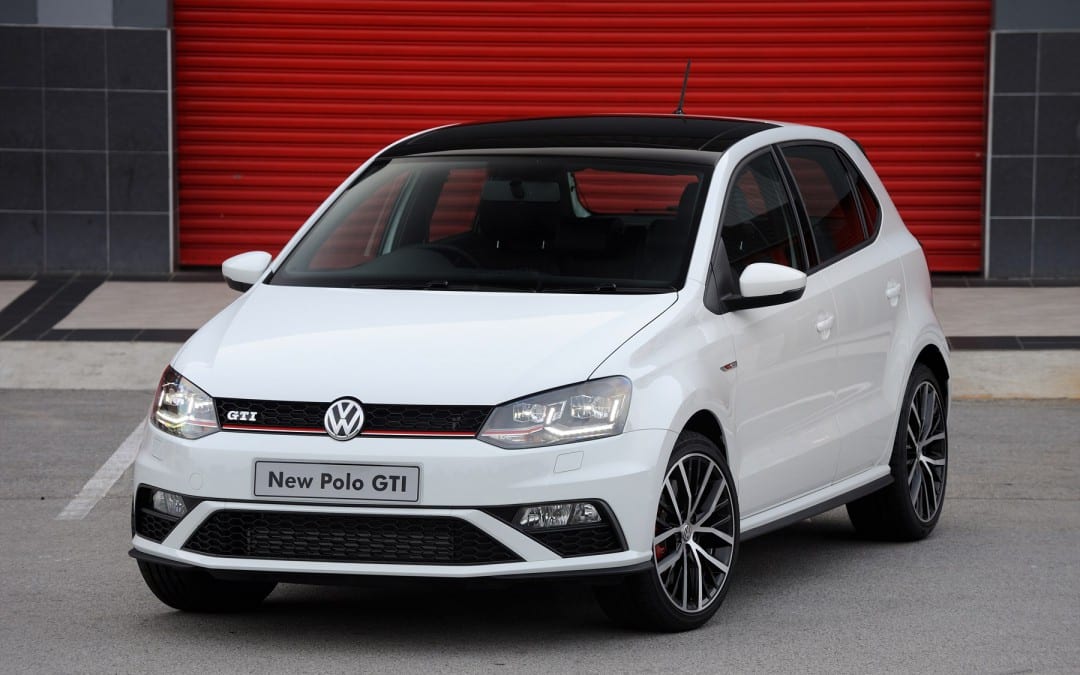 Return of the hooligan

Slightly more than a decade ago, Volkswagen redefined the hot hatchback with their fifth-generation Golf GTI, and ended up setting the template for at least the next three generations of GTI to follow. Its innovations include a multi-link independent rear suspension and a direct-injected turbocharged engine, and it also introduced hot hatch buyers to the concept of a GTI with an automatic gearbox – an innovative twin-clutch transmission (DSG), which has since become the norm in any performance car worth its wings. 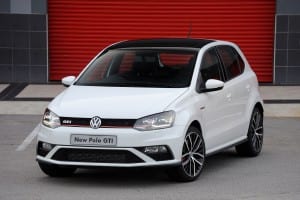 Then, as now, enthusiasts bemoaned the loss of a third pedal in the driver’s footwell, stating that improved performance and optimised efficiency is no substitute for the immersive experience which is lost by taking away some of the driver’s control over the car. And they have a point: relinquishing yet another driving function to a computer means taking another step towards cars which will eventually end up being smarter than you, and nobody wants that. But there’s no denying the fuel economy benefit of a properly-programmed twin-clutch gearbox, and because they change ratios quicker than any mortal ever could, they shave whole milliseconds off those all-important acceleration times which make up so much of our braai-side conversations.

Buyers bought into the idea of an easy-driving performance hatchback to such an extent that the vast majority of new Golf GTI sales now involve two-pedal variants. Small wonder then, that when the current-generation Polo GTI landed on local shores, it came exclusively with a DSG gearbox. But now, Volkswagen is bucking the trend they themselves created, by launching a manual alternative to the self-shifter during the Polo GTI’s mid-life facelift. 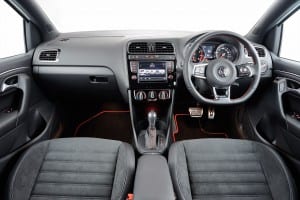 It certainly looks like they listened to their (few) hard-core buyers, because not only is there a stick shifter in the cabin, but the new 1.8-litre turbocharged engine (which also replaces the 1.4-litre twin-charged mill in the DSG version) is furthermore endowed with a chunk of extra vitality when hooked to the manual transmission, courtesy of a hike in its peak torque output. 250 Nm in the DSG becomes 320 Nm in the manual, even though the maximum power output remains pegged at 141 kW. On paper, it would definitely seem as though the manual Polo GTI is an edgier, tougher alternative to the super-smooth DSG.

And as it is on paper, so it is on tarmac. Compared to the Polo GTI DSG I tested a few months ago, the manual version is definitely a lot more aggressive as far as in-gear acceleration goes. The surge of torque comes on strongly very early in the rev-range, and its throttle response is nearly instantaneous. Combined with the slick-shifting 6-speed gearbox, it endows the junior GTI with really robust acceleration, and because the engine is perfectly willing to wind out to its limiter on the far side of 6000 r/min, there’s ample opportunity for a lazy driver to just surf that lovely wave of torque in a single gear, while still going really quickly indeed. 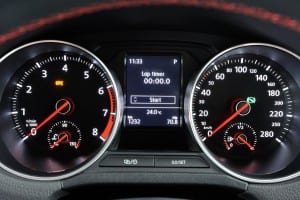 The stopwatch doesn’t quite agree with this perception of improved acceleration, however: the 0-100 km/h sprint takes 6.7 seconds with either transmission and the top speed is an identical 236 km/h. To add insult to injury, the DSG should also use less fuel, with its official average consumption figure of 5.6 ℓ/100 km compared to the manual’s 6.0 ℓ/100 km. (I registered 6.8 ℓ/100 km with the DSG and 7.2 ℓ/100 km with the manual, which is still commendable given that both cars were driven with a fair bit of verve on occasion and saw more than their fair share of city traffic.) This fuel consumption difference is easily explained by the DSG’s wider ratio spread, which allows the engine to be kept around its optimal operating range more of the time. But why is the manual no quicker than the DSG against a stopwatch?

The answer lies in the Polo’s front wheel drive platform as well as the effectiveness with which the DSG transforms engine power into forward motion. The DSG’s wider ratio spread, which makes it more parsimonious, also helps to keep the engine operating near its peak power output by virtue of its closely-stacked gears. Add the DSG’s lightning-quick shift speed and the fact that either flavour of GTI is constrained by the traction available at the front wheels in any case, and the various factors even out any performance difference there might have otherwise been. Fortunately, both Polo GTIs are extremely rapid, regardless of the means of power transmission.

The manual GTI is definitely more engaging to drive though, for a reason which has nothing to do with the added man-machine interaction via the gearstick and left-most pedal. It starts off when you flatten the accelerator pedal in a low gear, which immediately results in a noticeable tug on the steering wheel as mild torque steer sets in when the front tyres threaten to break traction. It’s not a dangerous trait, because the assisted steering makes it easy to keep the car pointed in the right direction, but it involves the driver in the process of driving quickly just that little bit more than the more civilised GTI DSG manages to do. 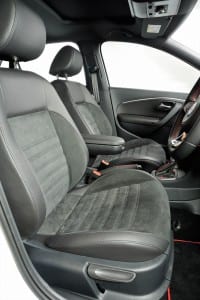 The news is also mostly good as far as the facelifted Polo GTI’s driving dynamics goes. The re-tuned suspension endows the hot Polo with well-controlled body motions during sudden direction changes and keeps the fat rubber glued to the tarmac on a twisty road. It feels like an old-school hot hatch, with its torsion-beam rear axle dangling the inside rear wheel in the air during high-speed cornering, inviting the rear end to gradually swing around in response to a mid-corner throttle lift. There’s loads of road grip from it 215/40 17-inch tyres, giving way to safe, progressive understeer if the driver gets too ambitious. But as entertaining as its traditional driving experience is, it’s never threatening or unpredictable: like the best hot hatches through the years, it invites the driver to push harder and harder, and signals the eventual end of its grip long before it actually becomes dangerous.

Electronic trickery also plays a part in the Polo GTI’s dynamic prowess, because apart from the usual stability control system, there’s also a virtual limited slip differential between the front wheels. Called XDS Plus, this system not only applies braking force to whichever drive wheel is spinning, thus sending torque to the opposite side, but also uses the brakes to help tuck the Polo’s nose into a corner that little bit quicker. This results in really agile turn-in and a strong resistance to understeer from the outset, and a satisfying ability to catapult the little car out of a corner with real enthusiasm.

Of course, you’re bound to pay the price for this sporty handling somewhere, and in the Polo GTI’s case, it involves the ride comfort. While other Polos absorb road shocks with neither a shudder nor a thump, the GTI is noticeably less absorbent. Freeways and suburban roads won’t bother it too much, but rural roads around the Hartebeespoort Dam- and Rustenburg areas caught both the earlier DSG test car as well as this manual tester off-guard on a number of occasions, sending quite abrupt impacts directly to the occupants’ spines. The Polo’s build quality is fortunately in the “Stellar” category, so rattles failed to manifest even on the bumpiest of roads, but buyers would be well-advised to stick to smoother tarmac (or any other Polo derivative) if they’re not well-acquainted with their chiropractors. 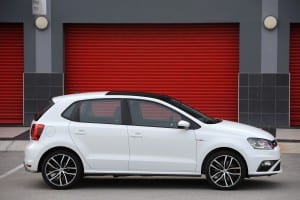 As with all VW GTIs over the years, the cabin is only minimally dollied-up when compared to their base vehicles. The Polo GTI gives you aluminium pedals, a few discreet GTI badges, a flat-bottomed steering wheel, unique instrumentation and sports seats with deep side bolsters, but the overall effect is still rather subdued – I drove a Polo BlueMotion directly after I tested the manual GTI (test report to follow), and barely noticed that I was in a different car (until I started it, that is…) This is not a bad thing at all, for the normal Polo interior is still right at the top of its class, awash with soft-touch niceness and logical ergonomics.

Just like the lesser Polos, the facelifted GTI features Volkswagen’s latest colour touch-screen multimedia system as standard, (finally) complete with a USB port, Bluetooth compatibility and that clever proximity sensor gimmick which enlarges the virtual “buttons” on-screen when it notices your hand approaching. Other (optional) niceties includes a panoramic sunroof, a rear-view camera with parking sensors, climate control and cruise control, and exceptionally effective LED headlights. Those headlights also added considerable cosmetic appeal, complimented by the red stripe running from the grille into the headlights themselves. The Polo GTI also looks suitably sporty with its squat stance, subtle bodykit and diamond-cut alloy wheels, even though it is far more discreet in appearance than most competitors. 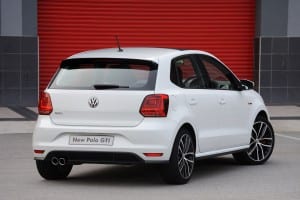 Fitting a manual gearbox to the junior GTI has certainly added an interesting twist to Volkswagen’s rocket for a smaller pocket. While the DSG version is smooth and sophisticated but somewhat aloof, the added torque of the manual GTI gives it a harder edge. It demands more commitment from a driver intent on exploring its performance, and needs a firm hand to guide its way when the loud pedal hits the carpet. More than the mere gearbox interaction, it’s this hint of unruliness which recalls the great hot hatches of old, and which turns the manual Polo GTI into a clear winner: it proves that VW still remembers how to build a slightly naughty car.