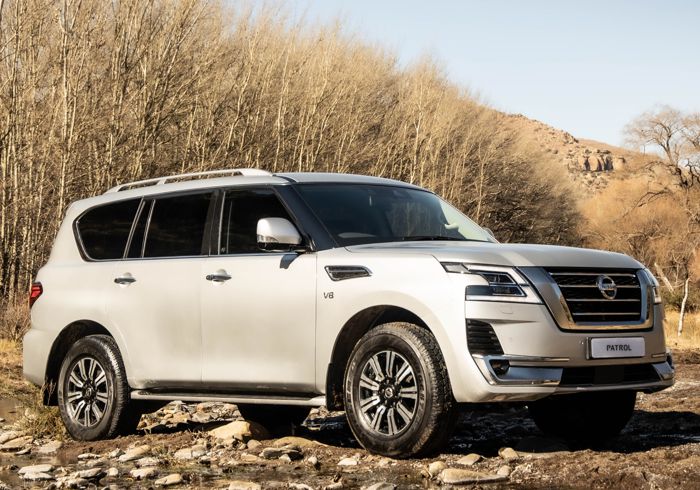 If you’re wondering what the most luxurious Nissan that money can buy is in South Africa, well, it always has been and still is the Patrol. Nissan recently broke the covers off the latest version of the mammoth SUV and we’ve investigated to see what’s new and what you can expect.

The Patrol made its local debut in 2017, which means it hasn’t been around long enough for you to see many of them on the road, also likely because it occupies a very niche space in the SUV segment. Our initial encounter with the model revealed an SUV which was larger than nearly everything in its segment – the Patrol was so roomy and vast in its proportions that we dubbed it the house on wheels.

In its new skin, the luxurious barge features very noticeable changes, drawing a clear distinction between old and new. A new V-motion grille and boomerang-shaped LED headlamps take centre stage on the Patrol’s prow. At the rear a set of revised tail-lights taken up residency, while the Patrol’s overall commanding box-like shape on 18-inch rubber remains the same. Inside, the cabin retains its premium finishes with wood veneer inserts and leather, all around to give it that classic feel. A 13-speaker Bose sound system is on audio duty inside the vehicle, and the rear has been fitted with two 8-inch entertainment screens with wireless headphones to make those long trips with the family enjoyable.

As with many of their current models, the brand has included the Nissan Intelligent Mobility package in this premium offering, which offers a host of safety features. Included in the NIM package is Intelligent Emergency Braking which can detect pedestrians, Intelligent Forward Collision Warning system utilising radar, and according to the brand can not only pick up the speed and distance of the vehicle ahead, but that of the vehicle in front of the preceding one. Advanced cruise control is also included in the Patrol.

Beneath the bonnet resides the original 5.6-litre V8 found in the outgoing Patrol. Nissan opted to leave the eight-cylinder untouched and it still produces the same 298kW and 560 Nm as before, which is substantial for the 2.7-tonne vehicle. The Patrol will still be offered in 4X4 with four driving modes to navigating different conditions.