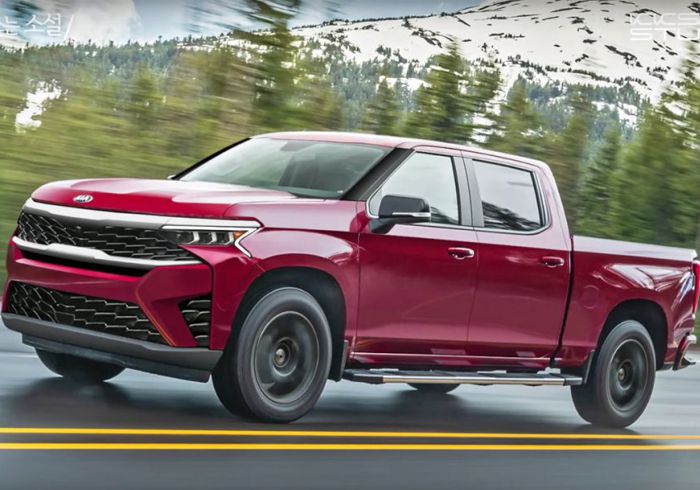 A digital artist has published a fresh rendering imagining what the rumored double-cab bakkie from Kia will look like wearing the new family face from the company. Seemingly using a press image of the Chevrolet Silverado (interestingly, rather than the smaller Colorado) as a reference, an artist came up with the image at kksstudio in Korea.

The report first appeared on the Australian CarsGuide website and indicates that Kia and Hyundai will sell the Australian market a double-cab bakkie as early as 2022. Chief Operating Officer Damien Meredith, from Kia Australia, told the publication that the project was not only accepted but is also underway. “Work has begun,” said Meredith. “We ‘re talking about a dual-cab, a single-cab-what we’ve requested is the full gambit for the ute, and that (includes) a dual-cab with diesel and petrol (options). When a light commercial range does arrive in Australia, I ‘d be confident we ‘d be looking around that 8-10% market share in that range,” Meredith said.

The render combines elements of styling from the recently unveiled fourth generation Sorento as well as the new Seltos. Meanwhile, look closely at the headlamps and you will find a feature that has debuted on the latest Kia K5/Optima.

In April 2019, a high-ranking Kia executive in the U.S. said the Korean company had “enough time” to develop a bakkie, while such a vehicle was planned “a long way down the line.”

Why South Africa should be interested in a bakkie bound for Australia? The secret here is the structure, because both Australia and South Africa are markets that drive the right. Generally, if a conventional model is verified to adopt Down Under, a potential South African adoption will be foolish to ignore. Let’s not forget, too, that Australia’s bakkie culture is huge, just like South Africa.

The Koreans will, of course, have watched the gestation of the Mercedes-Benz X-Class and the consequent disastrous loss of sales carefully and will be determined to avoid such a result. The Koreans do not play the high-quality luxury vehicle card and suppose that the ability to display badges would carry men. Considering the warm answers of a few years and the subsequent confirmation that it’s in development to the Hyundai Santa Cruz model, it is clear that Korean people are involved in disrupting this segment worldwide. Nor will the Koreans work on their own platform with existing players to borrow. Pricing will also be consistent with their previous approach, with complete guarantees only contributing to the bargain.