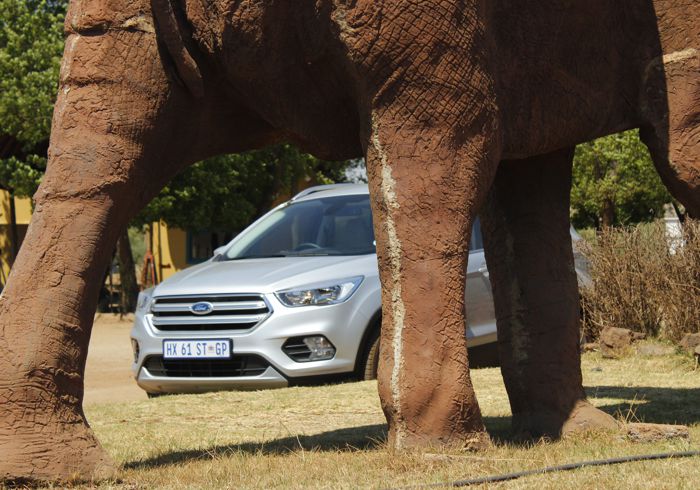 A great deal of demand is placed on the modern-day car of today, faced with unrealistic expectations of buyers. It is difficult to keep everyone happy. People buy a compact family SUV but expect it to corner like a Honda Civic Type R -or- they buy a hot-hatch back – only to realise that it does not have the cargo carrying capacity of a freight train. While there are sensible choice SUV’s in the market: which are as practical as a Swiss Army knife and provide temporary relief for that insatiable performance itch.

The Kuga 1.5TDCi Trend is not a car to excite but rather to delight. It holds numerous advantages over any of its closest diesel competitors – the Nissan Qashqai 1.5dCi Tekna respectively. The Kuga’s diesel motor runs as smooth as a petrol engine, matched by a 4.4l/100km fuel-efficiency, it is the biggest in its class and offers more standard features at a lower premium.

Based on the same C1 Platform that underpins the Ford Focus, along with a front-axle independent Macpherson struts with off-set coils and a fully independent multilink with control blade rear-axle. Lends the Kuga a compliant ride quality that both absorbs and deflects the most aggressive tarmac Gauteng roads have to offer. Demonstrating a flamboyance for transforming heavily corrugated dirt-roads – a daily commute to my daughter’s school – into a serene travel adventure: particularly noted during our trip through the Rhino & Lion Park. Under the bonnet is an 88kw, 1.5TDCi engine, sending power to the front-wheels is a 6-speed manual gearbox – spliced together produce 270nm of torque. Providing efficient pace for inner-city driving, suburban meandering and long-distance road trips – furthermore it has a 5-Star EuroNCAP safety rating. Which has earned it the distinction as one of the safest cars in the world – seven airbags will do that! Standard safety driver aids include, ABS/EBD, Brake-assist, Trailer-stability function, ESP with Traction-control, Hill-launch assist: a reverse-camera and rear PDC for good measure.

The Kuga’s cabin interior is by far the most comfortable I have experienced in this division. Every inch of its architecture is lined with soft-to-the-touch padded materials and quality plastics. Along with ergonomics that cater for occupants of varying body-sizes, the seats are designed to eliminate driver fatigue and improve driver alertness. Complemented by driver/passenger seat rear-mounted folding food trays, which served as shelves for my daughter’s Barbie Dolls, My Little Pony and colouring books, there is an ample supply of cupholders, utility areas, and storage compartments which further highlight the Kuga’s sentient styling – boasting versatility that would give any redneck double-decker trailer camper a run for its money. Albeit the dashboard layout is dated, juxtaposed by the raised position of the touchscreen control-panel that ever-so-slightly obscures making accurate selections along the bottom section of the touchscreen. Off-set by a voice-function, leather-wrapped multifunction steering wheel that provides configurable access to the Ford SYNC 3 Infotainment System, a 9-Speaker Sony Sound System, Satellite navigation, Automatic dual-zone climate control with rear-seat vents, an air condition cooled centre-console and cubby-hole as well as Bluetooth handsfree telephony and cruise-control function.

During our family excursion to the Rhino & Lion Park, touring the Cradle of Humankind, and then a late lunch at Makiti Lodge…there was something that really stood-out for me about the Kuga…a certain aspiration. If there is one word to describe that “feeling” it would be this word,” Fernweh,” according to the Intrepid guide, it is a German word which means, “an ache to get away and travel to a distant place, a feeling stronger than wanderlust.” Particularly when my wife and daughter were travelling with me – all three of us shared the same spontaneous desire to ditch our schedules and head for the coast…but via the Karoo. So, would I spend R459 400 on the Kuga 1.5TDCi Trend? No, I wouldn’t! But I would spend R561 300 on the Kuga 2.0T AWD ST Line. You see, I want a family SUV that has the cargo capacity of a freight train, is as practical as a Swiss Army knife, and corners like a Focus RS…ha-ha.