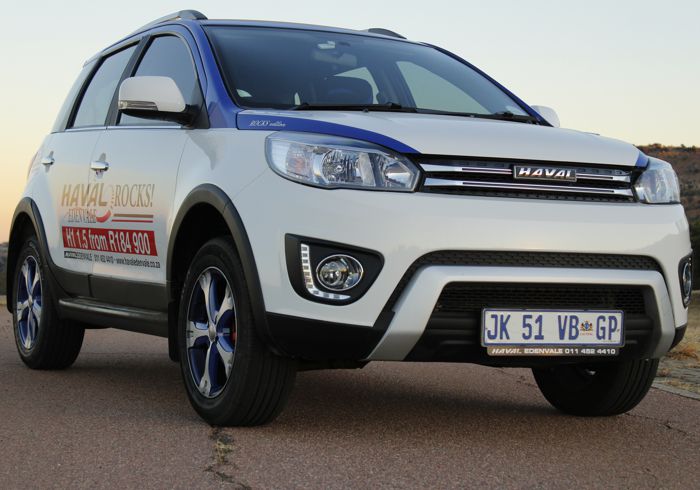 In collaboration with HAVAL Edenvale, Surf4cars will be doing a series of car reviews starting with the H1: in the next coming weeks we will have reviewed the entire range of HAVAL models. My usual testing ground was the Gerotek Dynamic Ride and Handling Track – an asphalt circuit designed to simulate the techniques of car-control and develop a deeper understanding of vehicle-dynamics…’for research purposes of course’…

Therefore I offer you my tale-of-the-tape

Design: The HAVAL H1 bears little resemblance to any other sub-compact crossover in its class – yet its funky mini-SUV persona envisions modernity. Front-and-rear fog-lamps, LED DRL’s and rear-parking senses are all part of the standard package. However, this particular H1 Rocks Limited Edition model features a bi-tone vinyl wrap, with colour-coded mag-wheels as well as anti-smash-and-grab tinted windows – all courtesy of HAVAL Edenvale – that strikes a remarkable harmony between functionality and aesthetic appeal. Notice the valance of the rear roof-line, practical roof-rail fixtures, wrap-around rear-windscreen, the pronounced wheel-arches in-proportion to the 16” tyres, short front-end and extended body-height – hallmark the H1’s box-wagon urban safari styling which conveys a sense of on-road stability and interior space.

Engine: Under the bonnet is a 73kw, 1.5l engine, mated to a 5-speed manual transmission together produce 130nm of torque – amply sufficient for navigating national roads, traffic-jams, dirt-roads or cruising the highway. On track, I rowed through every gear at maximum RPM’s, hitting that ‘sweet-spot’ higher-up in the rev-range: the more laps I did, the more the 4-cylinder engine’s lilting toned showed a wanton for further punishment. Which brings me to a critical point, although HAVAL is a Chinese subsidiary, their vehicles are not of Chinese spec’ and are engineered to the highest European quality-standards: with many of the foremost designers and engineers head-hunted from premium European auto-makers.

Interior: The doors open into a fashionably soft-looking cabin that boasts colour-coded fabric-seats, air-conditioning, electric-windows, a radio/front-loader CD player with AUX/USB audio streaming and Bluetooth hands-free cellphone connectivity – accessible via the multi-function steering-wheel. Among the features just mentioned nothing really stands-out as class leading but throw-in cruise-control along with dual-airbags and the H1 steps into a different arena: competing with smaller but more expensive mini-hatchbacks or ultra-compact crossovers. Thus implying, pound-for-pound, there is not a competitor in its price range which can rival its value-for-money. With a respectable cargo-capacity of 310l, the 60:40 rear-seat split’s expanded floor-plan comfortably accommodates three children, four large dogs, blankets, pillows and some camping gear.

Driving Experience: Never judge a book by its cover is metaphorically the most accurate illustration of the HAVAL H1. Thus, had I not driven the H1 at Festival of Motoring on the Kyalami Racetrack – I probably would have been surprised, not to mention shocked after having driven the H1 at Gerotek. There is a fun side to the H1 resonated by its neutral-handling characteristics. On the dynamic handling track, entering turn-3, an off-camber, opening radius left-hand bend, with my foot flat-on the accelerator-pedal; given its 185mm ground-clearance, I expected a fair amount of body-roll and for the car to run wide. Yet even on the brink of the inevitable, the H1’s chassis telepathed its intentions – giving me that split-second opportunity to make faint adjustments to both my throttle and steering input. Careful not to over-cook the tyres nor the brakes – boasting all-round brake-discs I was impressed with the H1’s ABS/EBD braking system. That reverberated an ample ‘feel’ of hydraulic-pressure via the brake-pedal with plenty of bite to ward-off any previous concerns of brake-fade. Foremost, the same suspension dynamics as demonstrated on the dynamic handling track, also imbues a high-level of driving comfort and exceptional ride-quality therefore actively suppressing bump-through on the harshest of corrugated terrains or fissured tarmac.

Final Comments: At the risk of sounding bias, based on its individual merits and target demographic – there is very little of which I can fault the HAVAL H1. Ever-so-seldom, there were some aspects about the H1 that did irk me – ‘alas’ too ambiguous and irrelevant – that in my opinion are not worth mentioning. Its standard package is overall impressive, and therefore, in essence, the HAVAL H1 is a stunningly accomplished vehicle.