The Hyundai Santa Fe proves that premium is not exclusive. 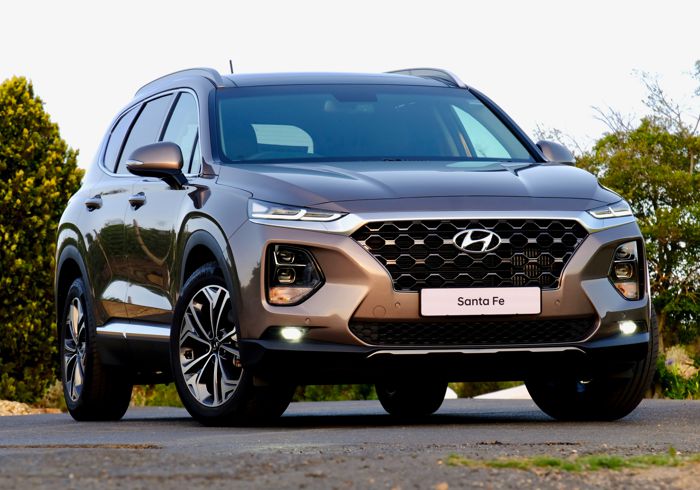 The Hyundai Santa Fe is about as big as you can go when browsing through Hyundai’s SUV range, and from the outside, there’s a noticeable effort that’s gone into the vehicle’s design. A futuristic-looking front end captures your attention, with Hyundai’s latest headlamp design of squinting headlamps over a chrome finished bar spanning the width of the bonnet. It’s a refreshing look. One thing to take note of with the Santa Fe’s architecture is how its creators have managed to craft it in a way that makes it appear far smaller than its actual size. It’s only when you take occupancy inside the roomy interior that you’re able to fully grasp the size of this SUV.

The extra space has been put to good use with a standard seating capacity of seven. Aside from its airiness, the big Hyundai’s cabin is well kitted and is of good quality. Plenty of standard equipment is included in its mid-spec and range-topping variants. A keyless system, dual electric front seats with heating and cooling, LED lamps, as well as a panoramic glass roof on the top-spec Santa Fe Elite.

On the road, the Santa Fe dialsin the charm by offering its passengers a pleasantly plush ride, a trait normally associated with premium automotive brands. The full range is powered by one engine configuration, a 2.2-litre diesel. For those with an aversion to oil burners, no petrol derivatives are currently on offer. If it’s any consolation, the motor is as refined as most diesel engines are nowadays. That knocking sound synonymous withdiesel engines is a thing of the past – modern units now idle with a gentle purr.

The four-cylinder mule gets the job done in this application – providing adequate shove to move you and your family (or goods) along without hassle through an 8-speed auto delivering 142 kW and 440 Nm. Where it does fall short is its stopping power or lack thereof. The brakes in the nearly 2-tonne vehicle wouldn’t be described as the best in the business. We’re not suggesting that they’re of inferior quality, but they just don’t offer as much bite as they should. On the initial pedal squeeze, there’s a centimetre or two of meat before you hit a flat spot. From here you may as well be pressing against a brick slab. Having said that, the brakes fitted to the Santa Fe achieve their objective – which is bringing the vehicle to a standstill reliably, despite the pedals industrial feel.

When dealing with the finer art of manoeuvring around restricted spaces, a skill many still lack despite being declared competent to drive, the Korean SUV’s engineers were rather considerate and gave the Kia an impressive turning radius. This makes navigating the nearly 5-metre long vehicle a casual task.

Overall, the Santa Fe is a premium offering from the Korean manufacturer, kitted with a fair amount of bells and whistles at no additional cost. It’s currently available in three grades, with the variable four-wheel drive available in the top-spec Elite.