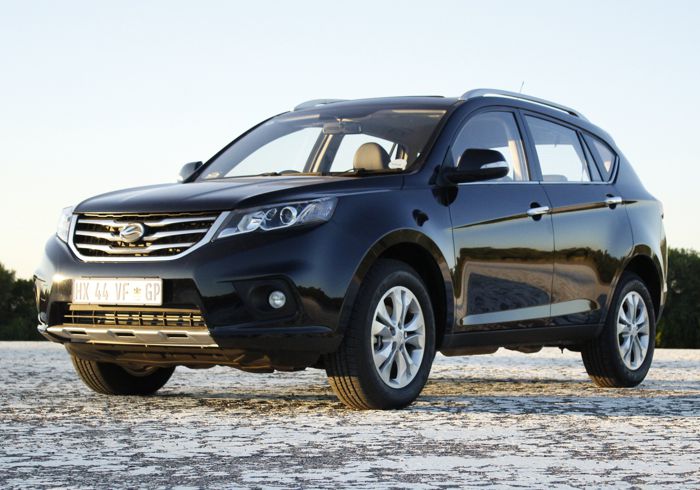 Surf4cars unveils the Landwind5 and its Chinese origins.

It was not my intention to carry out a performance review of the Landwind 5; after all, it is just another urban family SUV. So why take it to Gerotek? Because a test-track and skidpan is the one place people would expect a Chinese car to fail…besides… it was for research purposes.

Out on the Dynamic Handling Track, I could safely evaluate the Landwind5:  get a feel for its cornering capabilities, load transfer-dynamics and braking endurance. What I discovered about the Landwind5 was surprising –

The Mitsubishi 4G63T engine, the same engine used in the Evolution Rally car of the “90’s, had already proven itself along the 40km route to Gerotek? Gauging by the Landwind5’s impressive overtaking speeds, flexible gear-ratios and effortless acceleration – that had I wanted to. I could have comfortably teetered at speeds of up to 160km/h. Evidently the Landwind5 achieved 8l per 100km fuel combustion, all the while providing ample ride-comfort over irregular road-surfaces and steering response through the most precarious corners: my prediction for the Landwind5’s review at Gerotek was starting to look surprisingly good.

With Sport Mode activated, I did a few slow laps of the track to build some capacity, figure-out the braking zones and optimal line of travel through the curves – left-foot braking to manage both the body-roll and the understeer. 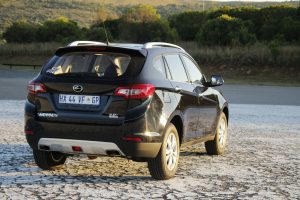 Powered by a 140kw, 2.0l, turbocharged engine, that develops 250nm of torque sent to the front-wheels via an 8-speed automatic gearbox. Modulating the throttle requires some finesse, oscillating the power-band with the accelerator-pedal to keep the engine and gearbox joined at the hip. Which sounds complicated but the reality is the Landwind5 is a breeze to drive and predictable to maneuver. A congenial family SUV indeed, which I think the market is still wary of, perpetuated by people’s misperception of associating flimsy plastic imitation cell phones you buy at Chinese wholesalers with Chinese vehicle manufacturers.  However, the Landwind 5 breaks that stigma. Furthermore, would you believe me, if I said the Landwind 5 is also fun to drive? Sure, it’s not a driver-enthusiast’s car…even with the rebuttal of a roof-mounted jet engine as a standard feature…roof-rails are standard though. Nevertheless, through the corners, the car’s chassis/suspension handled both sudden directional and elevation changes with poise, determined to keep pressing the accelerator-pedal due south, I advertently summoned the jolly giant within the Landwind5.

Within the realms of mom’s taxis and soccer dad’s cabs, an 855l cargo-capacity is enough space to herd cattle, not forgetting the reverse-camera because at some point or another, a skateboard will mysteriously appear behind you just as you are about to reverse out your garage. The reverse-camera also makes it easier to hitch your trailer. In addition, did you know the Landwind5 has a maximum brake-towing capacity of 1500kg?

At a price of R309 880, eventually one of your friends or family is going to buy a Landwind5…now wouldn’t that be a surprise.