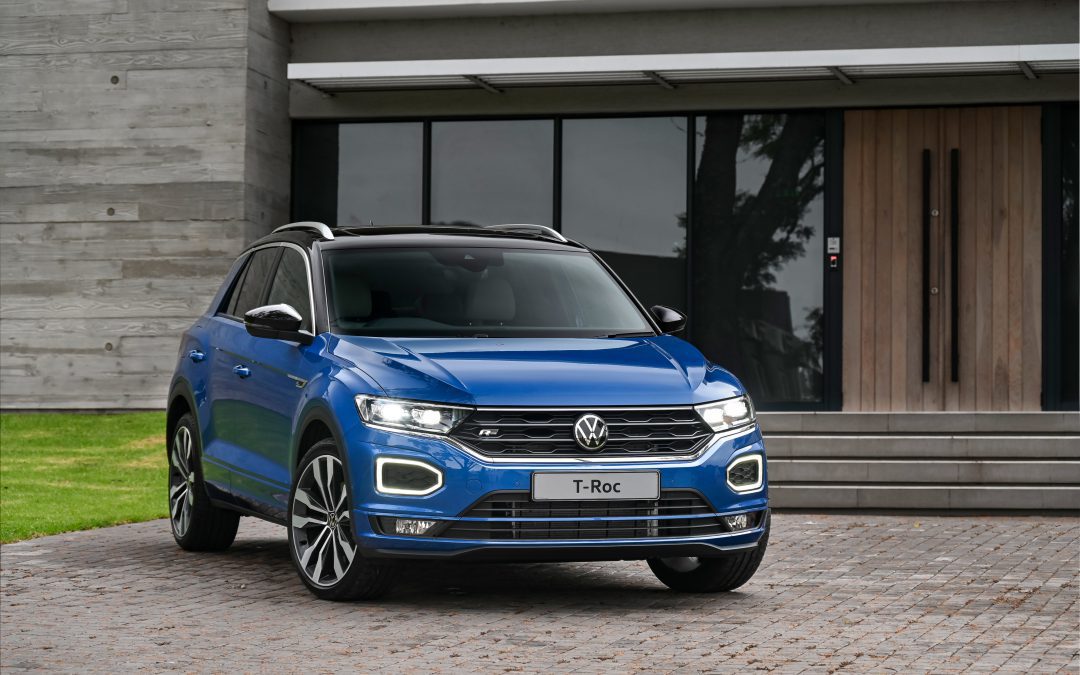 The slow demise of the sedan has been paralleled by the upsurge of the SUV. VW sedans like the Arteon and Jetta no longer have a place in the South African market, and they will be missed by many. Decisions to cull such models are always financial and nothing more, and speaking of such, Volkswagen South Africa has added the final puzzle piece to their Sport Utility Vehicle portfolio.

We’ve been waiting with anticipation for the VW T-Roc, and to conclude the year on a high note, VW SA decided to launch the eagerly awaited T-Roc SUV. The new model fills the gap between the T-Cross and Tiguan, and is built on the proven Golf 7 platform, even though it’s longer and wider than the hatchback. VW has applied a sporty blueprint to the T-Roc and it looks very urban and brawny with bulging wheel arches – some have even likened it to a Golf 8 on steroids. The new SUV is available in two body trims, a modest looking Design as well as the sharp and stylish R-Line. Both have LED headlamps as standard equipment, but the highlight is the daytime running LED’s with integrated turn signals embedded into the bumper – a unique design feature from VW. The R-Line body styling suites the new SUV, while with other models it doesn’t always translate. In this application, it not only includes mild body enhancements, but also a bump in shoe size to a 19-inch alloy. All the derivatives are offered with the option of a two-tone exterior. Here the customer has 20 different colour combinations to choose from when designing their vehicle, making it as uniquely theirs as possible. The T-Roc’s front and rear now displays the brand’s new and redesigned logo, and with models equipped with 4Motion, a new emblem displays this feature too. It must be said, however, that if you’re unaware of these subtle updates, its ulikely that you would notice them.

Volkswagen has also added some ambient colouring in the interior to make this SUV as individualistic as possible. With this option, you can decorate the inside of your vehicle with colour from a selection of four different hues. Even with this mild sprucing of things the T-Roc’s inside is still very much VW and is a familiar space to be in, as an existing VW owner moving into the T-Roc, you won’t feel out of place. For individuals with a finer taste for audio, a beats sound system is on offer, and although it’s not from Bowers & Wilkins or Mark Levinson, it will still provide a better than average audio experience.

No one is perfect, and neither is the T-Roc. Having said that, the overall quality if its interior has its flaws. The use of hard plastic panels throughout the cabin is somewhat of a letdown considering the visual appeal of this space. An optional panoramic glass roof sheds positive light on this space and gives it an airy feeling.

As things stand, Mzansi has been allocated two engine derivatives in this model, a 1.4 TSI with 110kW and 250Nm as well as a 2.0 TSI producing 140kW and 320Nm. The smaller of the two is only available in the lower-spec Design Tiptronic, while the larger legged 2.0 can be had in the Design DSG as well as the R-Line DSG grade.

Since this is a model from VW which we’ve been waiting for with keen interest, we’re going to be spending some quality time with the T-Roc over December to discover what it’s like to live with. Look out for an updated report of our experience.