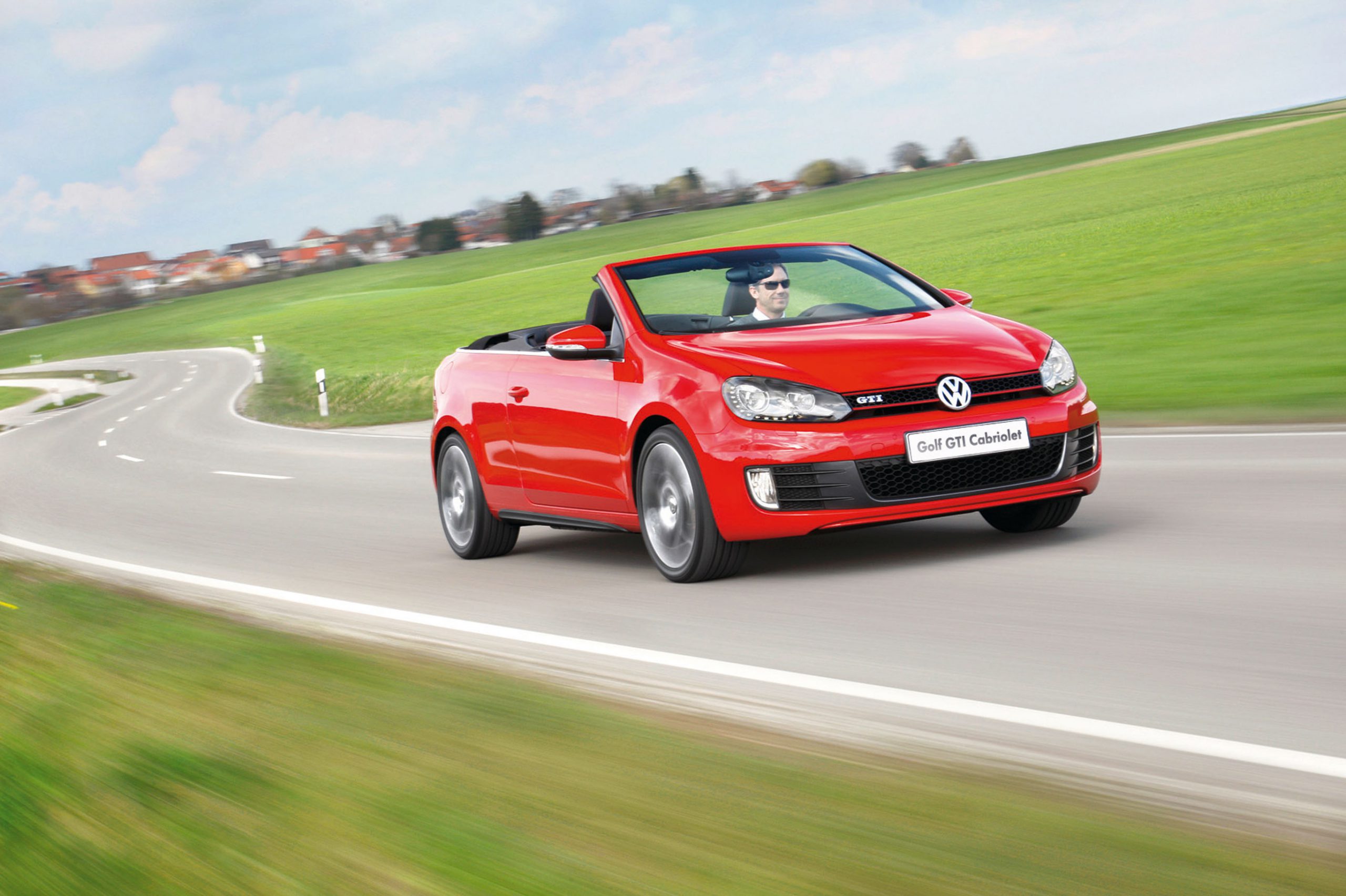 The Volkswagen Golf 6 GTI Cabriolet teaches us two things. Firstly it attests to the enduring nature of the sixth generation model; because even though it’s “old” it still feels contemporary.

It also shows that Volkswagen could sell anything with a GTI badge and guarantee that it will enamour Golf-crazy South Africans. Priced at R397 900, it’s more than the Golf 7 GTI. It’s not a logical alternative, but you can bank on its share of followers. 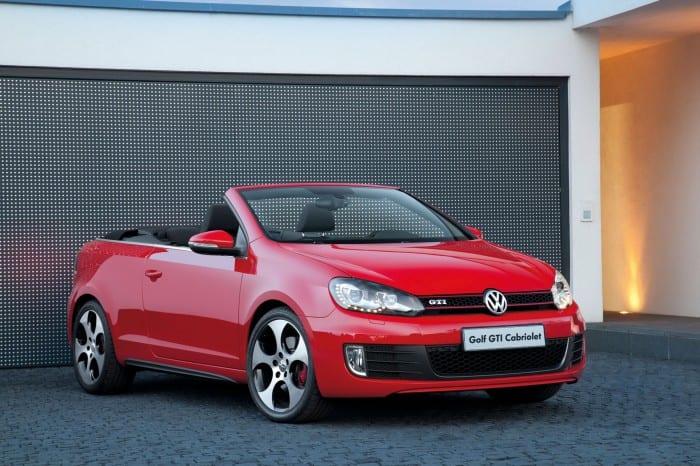 Some girls are bigger than others, as The Smiths’ song went and the topless GTI feels hefty.  It’s a natural consequence of chopping the top. To compensate for the rigidity lost without the roof; greater strengthening and bulk has been added.

That means it goes from standstill to 100km/h slower than the equivalent four-door model. Not by much, mind you. That’ll do the sprint in 6.9 seconds, while this manages it in 7.3 seconds. But the additional fat can be felt on the daily drive and in the bends; where’s it’s less athletic and fluid, but more brick-like instead.

You do get greater aural thrills however. It sheds its fabric top in around nine seconds, amplifying the hearty burp that emerges between upshifts via that six-speed double-clutch transmission. Some would even argue that the Cabriolet is more thrilling than the current GTI.

Plant your foot down and you can feel it scrabbling for grip between the electronic nannies’ efforts at intervention. Such waywardness has been quelled almost totally in the 7th incarnation of the iconic hot hatchback. 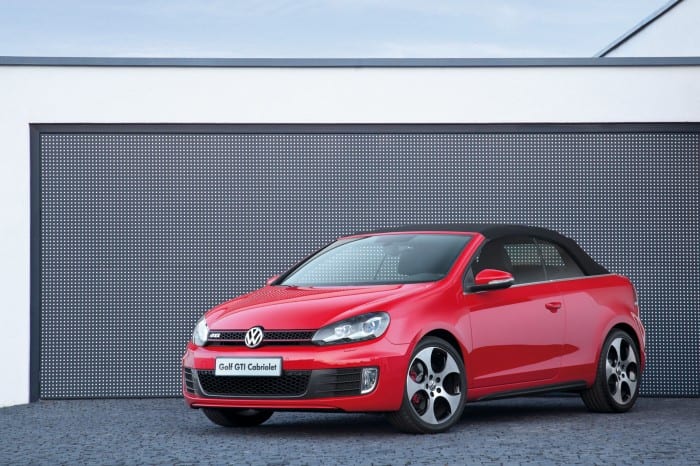 You could liken recent Golf iterations to that Girl Next Door. They’re wholesome, dignified, classy and even going topless – its still retains that alluring Golf tastefulness.

But in GTI format there are more striking pieces of jewelry complementing its nude pose. Like you would get on the standard version, there are a set of 18-inch Detroit alloys, a honeycomb grille underlined by a thin red strip, smoked taillights and frontal LEDs.

Passers-by appreciated the novelty of seeing a GTI without a roof on. But those who aren’t in the know might suspect you’ve done your own conversion on a standard Cabriolet. And that’s not what you want, after spending nearly 400 000 of your hard-earned Rands, is it? 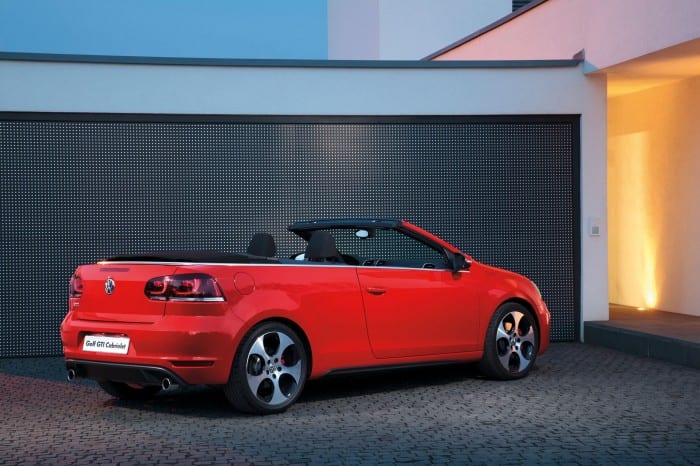 Inside it’s identical to that of a hardtop Golf 6 GTI, except you’ve got the magic of having the sky as your roof.

Settle into those supportive seats clad in black leather. There’s red stitching on the steering wheel and handbrake as well as mock carbon-fibre inlays on the doors and dashboard. Climate control is standard, as is an eight-speaker audio system which will help greatly in one’s efforts to peacock, while cruising down the boulevard.

Entry to the boot is narrow as expected. It does have a 250-litre capacity and the rear seats fold down. There’s a wind deflector too, which you’ll have to erect manually – but it’s pretty easy to do. 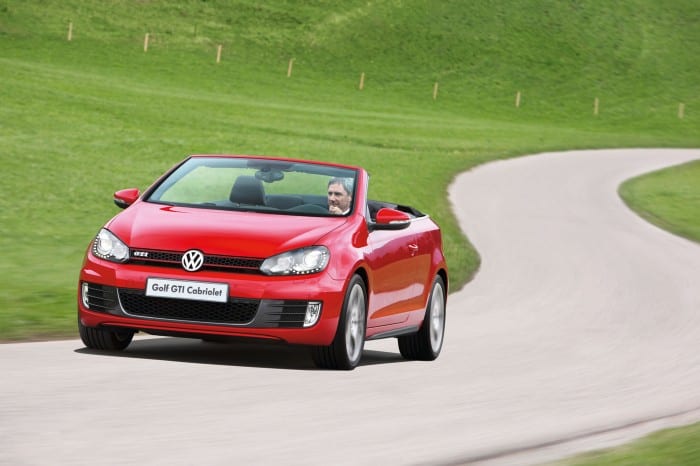 If you’re critical, the GTI is a rolling oxymoron. After all, those three letters stand for unadulterated driving thrills, where the recipe of power, weight and handling are measured with precision and result in harmony.

This is a fun, brisk boulevard cruiser – but the balance you’d expect from a GTI is thrown out because of the extra body fat. And when you consider that a Golf 7 GTI will set you back fewer bucks, this topless model becomes less enticing.

But because there’s only a handful on our market, it’s poised for future cult status and is unlikely to struggle to win the hearts and wallets of GTI loyalists wanting something more exclusive, even if it does adulterate what the moniker stands for.