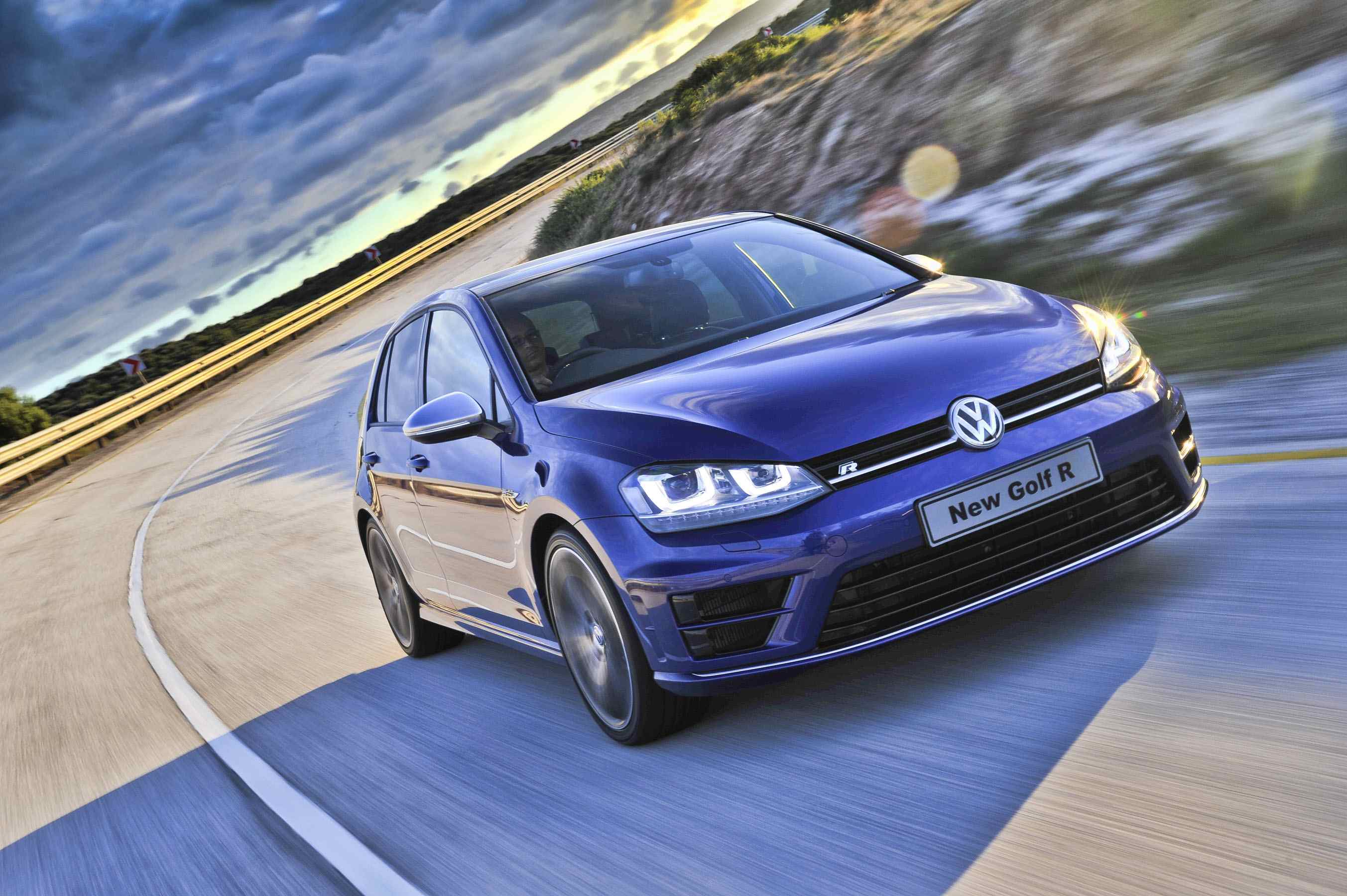 These are exciting times for fans of the extra-hot hatchback genre. And the German players are undoubtedly putting on the best show. Last year Mercedes-Benz threw down the gauntlet with their A45 AMG which boasts the most powerful two-litre production mill on earth. Audi followed with the S3 which still maintains parity despite its slight power deficit. And Volkswagen recently joined the fray with the latest installment of its R-badged Golf. 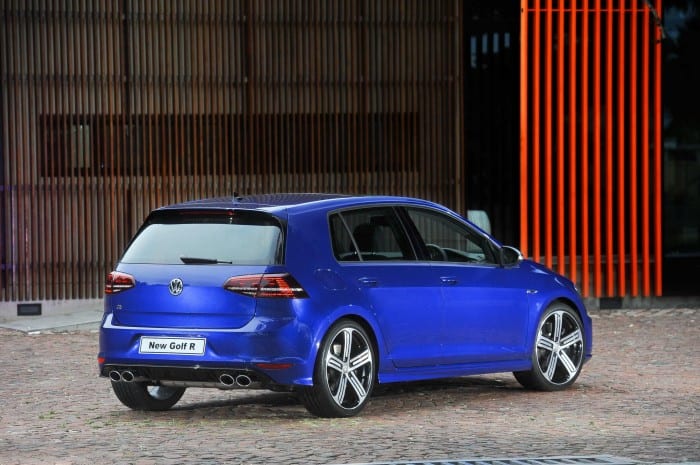 For some buyers GTI simply will not suffice. And the success of past potent Golf offerings like the VR6 of the nineties and the R32 of the early noughties attests to the demand for even hotter versions of the world’s favourite hatchback.

Under the skin the latest Golf R is nearly identical to its cousin from Audi. All the hallmarks that define fellow warriors are here: a turbocharged engine, four-wheel drive and a standstill to 100km/h sprint time that shames those packing bigger capacities.

Compared to its lesser sibling, this has an advantage of an additional 44kW and 30Nm of torque. By the time you count to five it would have dispatched the important dash. It is about second and a half swifter than the GTI. 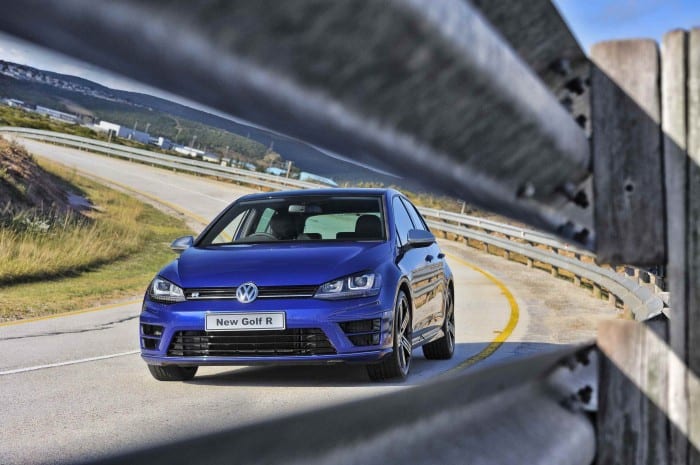 If the marginal sprint time difference makes it tricky to justify ownership, consider that the R has been holistically tweaked to offer bigger thrills and an easier exploration of the limit.

The engine breathes into action with a more pronounced tone than the trio-lettered counterpart. And tootling around town it hums a bass-loaded melody. Putting pedal to metal reveals rapid and effortless movement. And gear upshifts are punctuated by that distinctive burping noise inextricably linked to fast Volkswagens boasting the semi-automatic DSG transmission. A manual will be available in the second half of the year.

Ideally you would need track time to experience the difference. We put it through a stint at Zwartkops Raceway. Tauter suspension, brakes with more bite and the grippy assurance of all four wheels in motion culminate in a confidence to pull no punches. But even when you unleash your inner primate, the Golf flatters with its well-sorted underpinnings. Like with an underwater shark cage experience, this allows you to feel the elements of adrenalin and danger without actually exposing you to any real harm.

But for all this lyrical waxing, alas it must be said: the GTI is just as entertaining with its pace and (politer) belching noises on the daily grind, where you will spend most of your time. 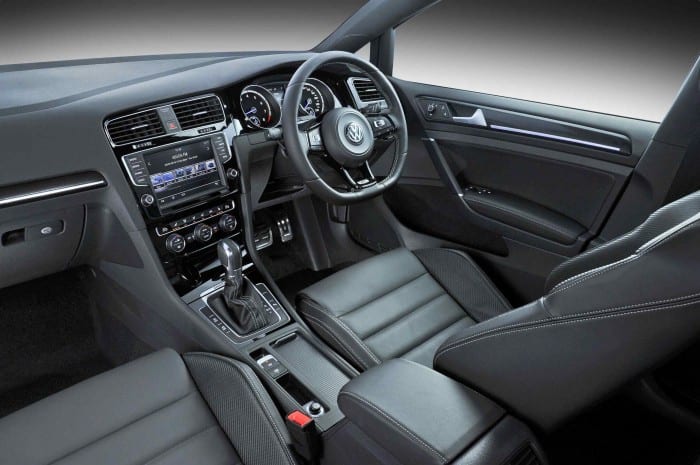 On the aesthetics side, Volkswagen deserves kudos for doing a thorough job to validate the dearer asking price. While the relative from Audi could easily be mistaken for a humble middle-range model, this is unlike any Golf in the range.

It underwent surgery, gaining sharper features. And a strict workout regiment ensured targeted muscle development. Logos are tattooed around the body and they garner immediate attention. As do the four fat pipes at the rear, bigger wheels and smoked lamps.

The interior was not neglected. Blue lighting on the doors sills and gauge needles are classy and racy. Even the leather has a carbon-like pattern woven in. And the standard toys are acceptable too. All the expected niceties are there, including cruise control, climate control and satellite audio buttons on the flat-bottom steering wheel. Further novelties extend to a clear touchscreen interface with a sensor that anticipates your hand movement and summons up the relevant buttons. 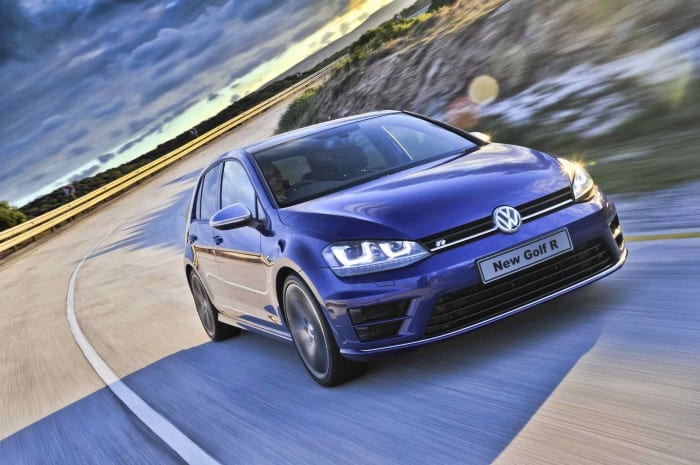 If you are on the market for an extra-hot hatchback, the Golf R has a wealth of talents and will not leave as large a hole in the pocket as the competitors. But we are left somewhat ambivalent.

For R70 600 less you could realistically enjoy the same amount of thrills on a daily basis with the GTI which is not significantly slower or less prestigious, as its predecessors might have been when stacked against the higher-tier Golf iterations of the day.

Gripes: Could save even more with cheaper GTI, which is not significantly lesser in pace nor prestige.