Volkswagen Polo GTI: Just about as good as the real thing | Latest News Armed with a new, scowling visage and a little bit more power, Volkswagen‘s junior hot hatchback returns to reassert its class dominance. Already handsomely outselling its competitors, the Polo GTI didn’t really need a lot of improving, so Volkswagen had a fairly easy task at hand when the time came to give the current model its mid-cycle facelift.

External changes to the Polo GTI are fairly minor, with different side skirt detailing, a new front bumper design and a black tailgate spoiler being the main distinguishing elements. Closer inspection will reveal neatly redesigned headlights, with a red stripe that extends from the grille into the headlight cluster. Static cornering lights are standard equipment, and adaptive, full-LED light units are available as an option. There are also new alloy wheels, twin tailpipes, and GTI badges on the front fenders to remind you what you’re looking at. The interior gets an equally subtle upgrade with piano-black trim on the doors and centre console upholstery, and leather/alcantara upholstery. Big brother Golf GTI donates its flat-bottomed, leather-trimmed steering wheel with integrated controls for the multimedia system that now (finally!) features a USB port and Bluetooth integration, and receives a colour touch-screen user interface as well. Red stitching on the steering wheel, gear lever and handbrake lever combine with the red borders of the floor mats to create a suitably youthful cabin atmosphere.

This cosmetically mild facelift hides a fairly serious mechanical update, however. As good as the old twin-charged (with both a mechanical supercharger and a turbo) 1.4-litre TSI engine was, the new 1.8-litre engine (now only turbocharged) outperforms its predecessor in every respect. Peak power climbs from 132 kW to 141 kW and is delivered at a lower engine speed. Maximum torque output (for the 7-speed DSG-equipped variant) is capped at the same 250 Nm as before, but is available over a wider rev range.

A 6-speed manual Polo GTI (with an extra 70 Nm) will arrive around July 2015, but Volkswagen claims the same 6.7 second 0-100 km/h sprint time for both variants (0.2 seconds quicker than before) – perhaps because humans cannot change gears as quickly and seamlessly as the computers can. The new engine is also a little less thirsty than before, dropping its official average fuel consumption to 5.6 ℓ/100 km – down 0.3 ℓ/100 km on the 1.4 TSI. 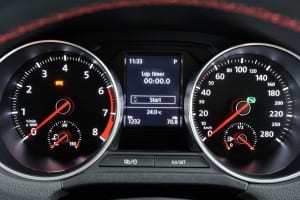 The Polo GTI’s handling prowess also receives a boost, thanks to the inclusion of XDS+. This is an extension to the older generation of brake-activated torque vectoring (XDS), which now acts like a locking differential while feeding power to the front wheels, as well as without any load on the engine. This helps to tuck the car’s nose into a corner, mitigating the tendency of the front wheels to run wide with understeer. It’s pretty effective too, keeping the car pointing in the right direction, even on wet roads and during sudden direction changes. The baby GTI might not be as playful and exciting as a Fiesta ST, but it corners with minimal body roll, and handles our uncertain road surfaces with calm confidence. An optional adaptive suspension system will be available from July to further improve the new GTI’s handling dynamics.

The suspension is equally forgiving of adverse conditions, and rides most bumps and dips with aplomb – even though its pretty new alloy wheels are shod with very low profile 17-inch tyres. This refinement extends to the cabin noise levels too, where only a rustle from the door-mounted side mirrors disturb the peace slightly. In this respect, the Polo GTI is easily the equal of Peugeot’s very well-mannered 208 GTi, with a large-car feel on the highway but considerable agility when the road gets twisty. Of course, it takes a fair bit of development and technology to build a small performance hatchback with such a wide range of abilities, and its retail price reflects this: R326 400 (with a DSG) pitches the new Polo GTI near the top of its market segment, but includes a service plan for three years or 45 000 km. Then again, its predecessor also commanded a premium price, yet managed to grab a larger market share than any of its competitors. We see no reason for that to change with the latest version Polo: it’s the authentic GTI experience in a smaller package. How could it possibly go wrong?