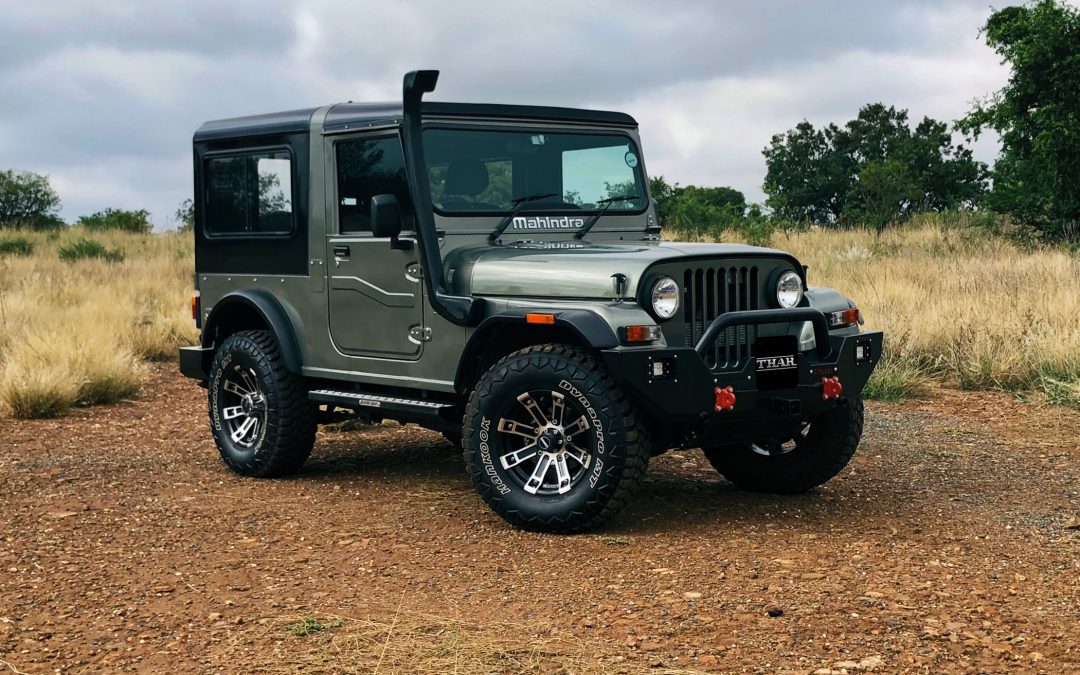 The perfect description for the Mahindra Thar 4×4…a Stephen King movie…a small boy of ten-years old moves into modern-day suburbia, where he is from no one really knows and none of the yuppie kids seem to like him. He’s scrawny, wears thick glasses, and has no dress-sense – an easy target for bullies. That is until another spurned group of friends discover that this eccentric new-comer has superpowers.

The Mahindra Thar 4×4 is a special purpose vehicle – built for vagabonding over the most hostile terrains along with its coach-wagon rugged design transmutes a bundu-bashing wanderlust. A direct descendent of the Willy’s Jeep: whose lineage dates-back to 1947 when Mahindra became the first India based automaker officially mandated to produce the Willy’s CJ3A Jeep – the company’s first 4×4 off-roader. Seventy-three years later and the legacy continues in the form of the Mahindra Thar CRDe 4×4 Adventure Edition. With outdoor accessories that include Bundu Gear front-and-rear bumpers, with tow-hitches, rear tow-bar, rock-slider side-steps, alloy-mag wheels, 265/R70/16” and a steel canopy. Thus, enhancing the Thar’s 4×4 impetus as the phenom of SWB compact 4×4’s: as demonstrated at the Krugersdorp Hobby Park off-road 4×4 trail. First, I started with a quick warm-up of the artificial obstacle course, once completed, I was then off to the open-terrain 4×4 track. Though familiar with the Thar’s capabilities, this was a five-kilometre ascent that started with a two-kilometre climb up a staircase of jagged-rock, covered in sand and loose gravel: terrain that could easily tear-open a tyre-sidewall along with clefts large enough to seize an axle. Given the Thar’s 230mm ground-clearance, 44° approach-angle, 27° departure-angle and 15° breakover angle I was confident I would avoid bashing the undercarriage but my concern was the Thar’s transversal roll-over angle – the angle at which it could pitch sideways without rolling-over. There is no information on the internet, on a brochure nor on any press release that provides the Thar’s exact transversal-angle – but I was about to find-out. Treading through a narrow but deep trench, required I maneuver the Thar into a left over-bank to avoid slashing the tyres and damaging the undercarriage notwithstanding the right sideview mirror was just centimetres away from scraping the trench-wall which furthermore provoked a feeling of claustrophobia like I was never going to escape that trench. Inasmuch as I was unable to climb-out the Thar and ‘pull-out my protractor’ – I would gauge the Thar’s transversal-angle at about 42°+. While this section measured how long I could hold my breath, the incline that followed was both a test of the Thar’s mettle and power. Rutted sand-stone, loose gravel, protruding jagged rock formations and deep crevices – as some would say, “Toyota Land Cruiser 79 4×4 territory.” Nonetheless, the Thar’s Borg Warner 4WD system/2.48 low-range crawl-ratio was perfectly adept to tackle the ‘hellish’ slope.

Generating momentum, not speed, was critical as well as knowing exactly where to position the front-tyres to ensure positive-traction upslope. I reached-down, grabbed the transfer-box gear-lever, located to the left of the clutch, and zig-zagged it down into 4l. The Thar lurched forward, with the front-tyres picking-up some of the scree at the foot of the gradient pitching the nose due-north, the blue-sky in full view – it felt like I was being hoisted by a crane prompting a momentary inertia of weightlessness. Once I reached the top, I stopped the Thar, breathed a deep sigh of relief and egressed the vehicle: feeling slightly bewildered, I took a moment to absorb what had just transpired. Whereby I was in complete awe of its capabilities – evoked by a profound respect and admiration for the Thar. I had made it all the way to the top of that mountain, which was no small feat, yet together with the Thar, I felt an earnest sense of achievement. In comparison to more mainstream 4×4’s on the market, the Thar is an ‘old school’, iron-jaw, bare-knuckle prize fighter. However, most people would not put a bet on its performance: a meager 78kw of power from a 2.5l common-rail turbodiesel engine together with a 5-speed manual gearbox produce a respectable 247nm of torque yet the drivetrain demonstrates uncompromising reliability and indestructability – by far one the most noble off-roader on the market.

I am neither an off-road 4×4 expert nor am I an outdoor enthusiast but after my experience that day – I was left both smitten with the Thar and bitten by the proverbial outdoor ‘bug!’