Woman Driving A Porsche SUV Shot at in Robbery and Attempted Hijacking. 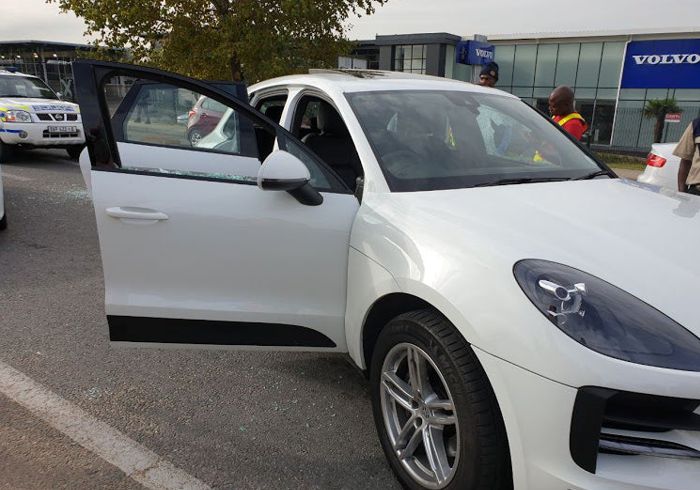 It’s very rare that we hear off a hijacking where the victim makes it out alive and the criminals don’t make away with the vehicle.  So, it was only a relief to hear of the woman who survived an attempted hijacking just recently in Midrand.

This recent incident fuels up even more fear in the recent spate of hijackings of luxury SUVs happening in Johannesburg. Recently a Lamborghini Urus was reported stolen from Bedfordview with the owner offering a reward of R200 000 to anyone who had any information leading to the recovery of his vehicle.

A woman travelling in a white Porsche Macan SUV was allegedly followed from Kyalami Corner and forcefully stopped at New Road. It seems it was more of a robbery than an attempted hijacking. The robbers smashed her car windows with a hammer to try gain access and made away with the victims jewellery.

Netcare 911 paramedics responded to the scene just after 4 pm on Monday afternoon. The robbers had fired a round of shots but luckily none of them hit the lady. She was later transported to hospital in a stable condition.

Despite the numerous reports of luxury vehicles being stolen and dealership employees being suspected of being part of the syndicates, there have been more reports of your average vehicles getting stolen too.

Three VW Polos were recently recovered, and the three suspects arrested after the suspects had allegedly driven them out of the Tavcor Volkswagen commercial pound in North End. All of this took place without anyone noticing apparently.

The suspects had allegedly posed as employees to gain access to the pound. This theft is said to be linked to a syndicate and the specialist vehicle crime unit is said to be taking over the investigation.

Upon questioning once flagged down by the police, the driver initially offered various explanations one being that he worked for a VW dealership in North End. After failing to convince the officers, Officer Msidwana took the suspect with him to North End to try verifying his story. Before they reached the dealership, the suspect offered Msidwana a R60 000 bribe.

Tavcor Group CEO Garrick Bowker welcomed the recovery of the cars in good condition with great relief. The three men are due to appear in the Port Elizabeth Magistrate’s Court on Tuesday.